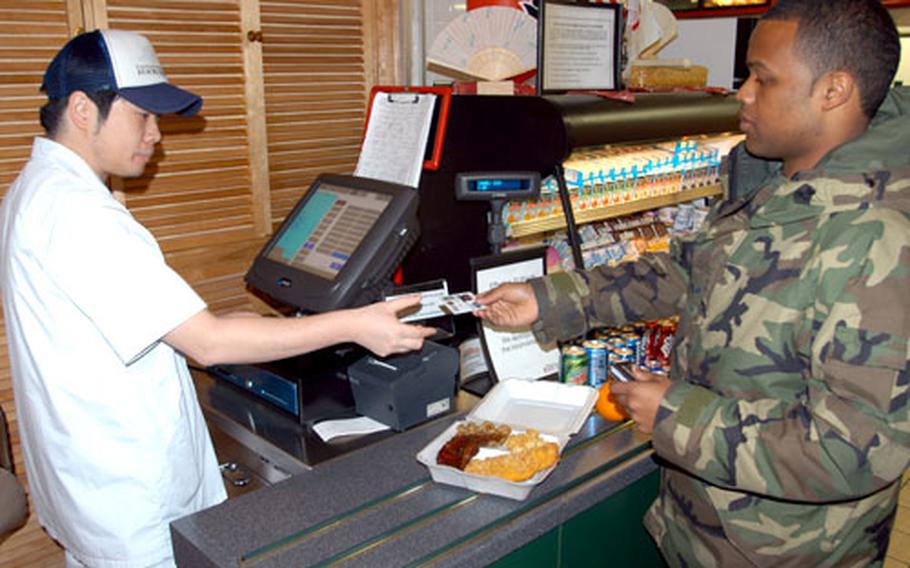 MISAWA AIR BASE, Japan &#8212; Another convenience is a casualty of war: A new Grissom Dining Facility policy allows only uniformed personnel to get their meals to go.

The estimated monthly savings of $750 to $1,000 isn&#8217;t much. But costs of Styrofoam to-go boxes, plastic utensils, salt and pepper packets and other condiments add up, officials said. Faced with another sparse budget year, pinching pennies is the order of the day.

Sites said Services is looking at ways to save money elsewhere, but plans are still in the works.

Limiting takeout at Grissom, he said, is a small cost-savings measure that doesn&#8217;t affect the mission &#8220;and that&#8217;s to get folks back to work.&#8221; The new policy also applies to the Falcon Feeder, but most customers there are in uniform because of its location on the flight line, Sites said.

Grissom, the main enlisted mess on base, feeds about 350 people a day. It primarily serves unaccompanied enlisted troops who live in base dormitories and hold meal cards. Other enlisted members &#8212; those who are married or live off base and receive a food stipend &#8212; pay for their meals.

Sites said officials have no exact count on how many people used takeout before the March 20 policy change.

On Wednesday at lunchtime, Grissom was buzzing with mostly uniformed Navy and Air Force personnel, including some who were unhappy with the new policy.

Other customers were philosophical or indicated they didn&#8217;t care.

Added Petty Officer 3rd Class Hayato Campos of the Navy&#8217;s Aircraft Intermediate Maintenance Detachment: &#8220;I only eat here during working hours, and on weekends I eat my own food.&#8221;

Manager Tetrault said some items, such as canned soda and other drinks, still are available for takeout. The new policy applies to most hot and cold food to go, he said.