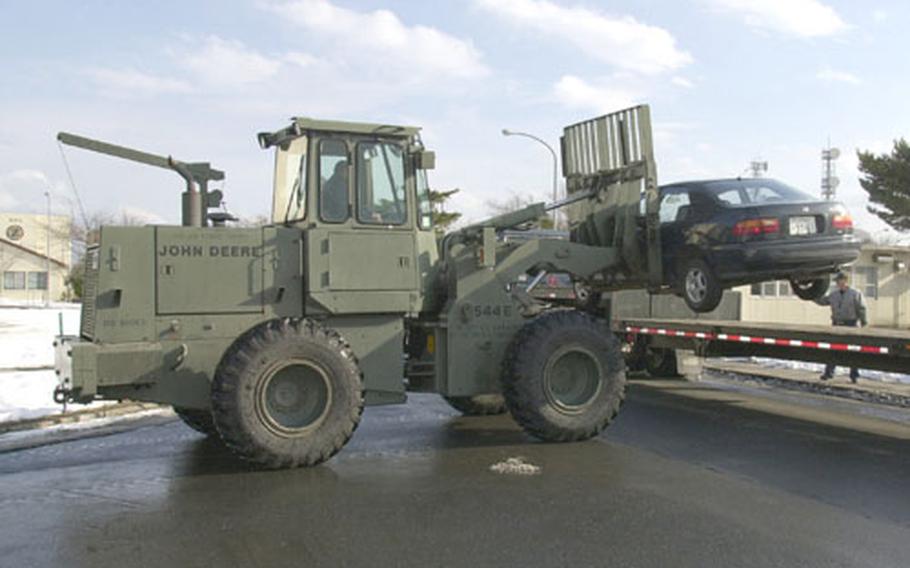 A car is fork-lifted onto a flat-bed truck to make room for snow plows to remove snow from a nearby dormitory parking lot. (Jennifer H. Svan / S&S)

A car is fork-lifted onto a flat-bed truck to make room for snow plows to remove snow from a nearby dormitory parking lot. (Jennifer H. Svan / S&S) 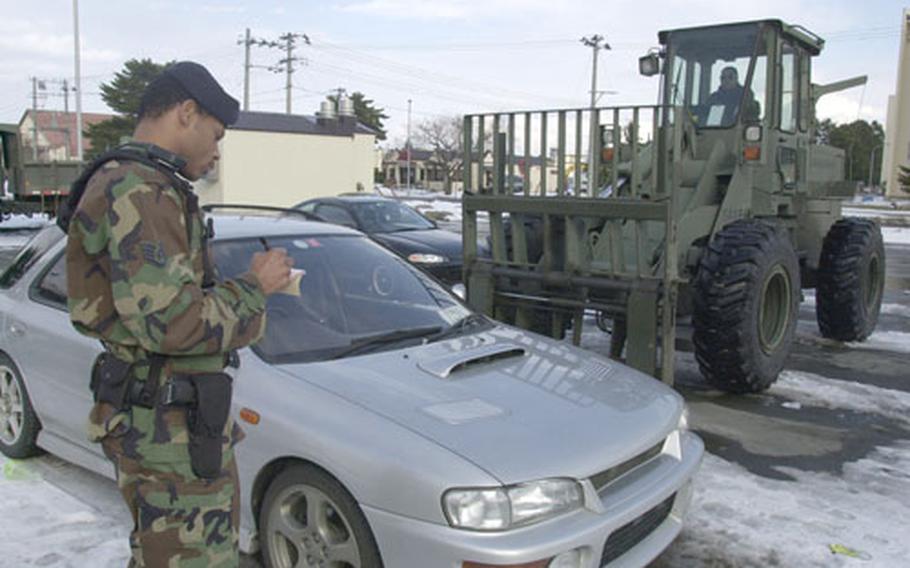 Staff Sgt. Eric Horace, a cop with the 35th Security Forces Squadron at Misawa Air Base, Japan, writes up a ticket for a vehicle left in a parking lot scheduled for snow removal Tuesday. (Jennifer H. Svan / S&S) 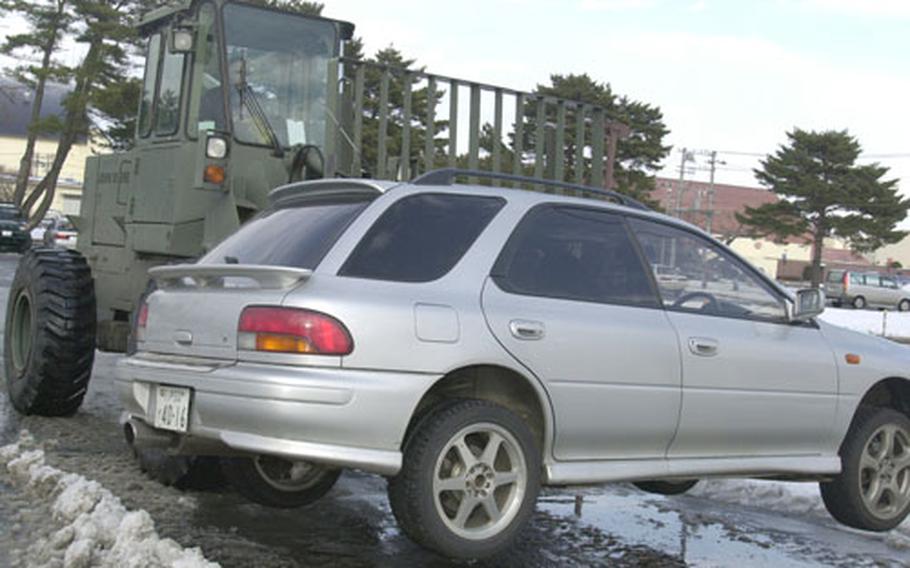 A car is fork-lifted from a dormitory parking lot at Misawa Air Base, Japan, so plows can clear snow. Vehicles not removed during designated plow times are towed across base. (Jennifer H. Svan / S&S)

MISAWA AIR BASE, Japan &#8212; When the snow flies at this northern Japan base, so do the plows.

Keeping the flightline clear and the roads ice-free is a full-time job &#8212; and then some &#8212; for 133 members of the 35th Civil Engineer Squadron from mid-November through the end of March.

The base&#8217;s weapons against an average of 125 inches of annual snowfall include more than 80 pieces of snow-removal equipment, including Titanic plows weighing 54,000 pounds.

The airfield is priority No. 1 for snow removal, followed by the main thoroughfares on base, secondary routes, mission-essential duty stations and housing areas, Sutherland said.

On the flightline, civil engineering crews use everything from ice-cutting blades and anti-icing and pretreatment chemicals to plows that push snow or ice fragments with a blast of air.

Though the flightline receives top billing, snow-removal crews are most visible between 1 p.m. and 4 p.m. weekdays, when clearing snow, slush and ice from Misawa&#8217;s parking lots.

The giant plows&#8217; rumble can startle and incite panic in a napping airman or sailor who&#8217;s forgotten to move his car from his dorm&#8217;s parking area.

Working beside the plows, security forces ticket cars not removed from parking lots scheduled for snow removal. A forklift then heaves vehicles onto a flatbed truck, which tows them to Rocky&#8217;s Roost, a parking area between the main and north side of base.

The policy is &#8220;a wintertime quality-of-life issue,&#8221; Sutherland said. It was put in place last winter after people continued to ignore the big, colorful signs warning when a parking lot was due for snow removal, he said.

&#8220;It had to be done,&#8221; he said, because the plows are too big to maneuver between vehicles. In years past, Sutherland said, he&#8217;s seen a foot of hard-packed snow accumulate around cars left sitting through a few snowstorms. When owners tried to move such cars, &#8220;They sit and spin and can&#8217;t get out till spring,&#8221; Sutherland said.

Citations are forwarded to the vehicle owner&#8217;s first sergeant and commander, Taylor said.

A team from civil engineering, transportation and security forces removes snow &#8212; and sometimes cars &#8212; from 30 parking lots per week, Taylor said. They hit the same parking lots the same time each week.

After he walked through the dorms warning residents the plows had arrived, the tally was down to seven.

Some people just forget, he said. They may have worked a night shift, didn&#8217;t think to park their car in another lot and slept right through snow removal, the master sergeant said.