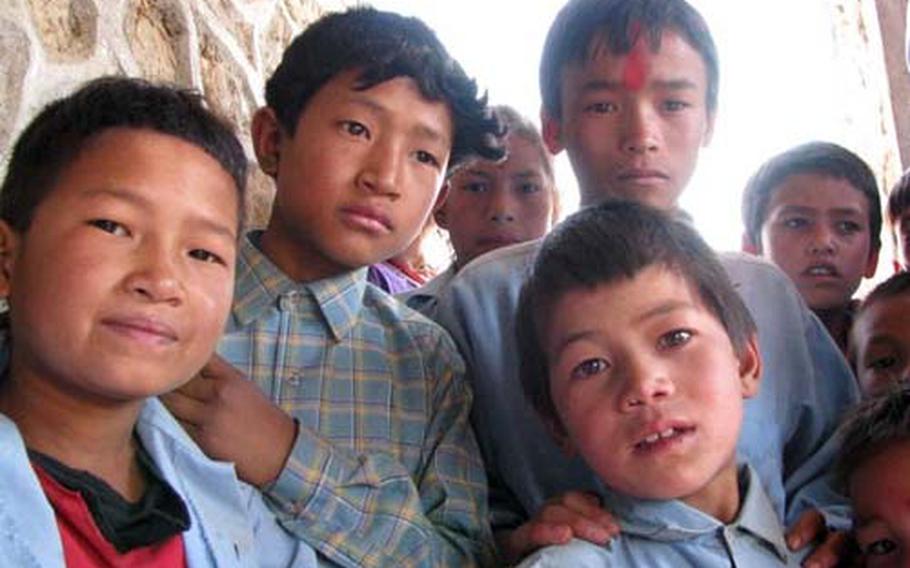 Nepalese school children gather for a visit by Susan Blake, an elementary school counselor from Misawa Air Base, Japan. Blake helped begin a fundraising project to assist the children. (Courtesy of Susan Blake)

Nepalese school children gather for a visit by Susan Blake, an elementary school counselor from Misawa Air Base, Japan. Blake helped begin a fundraising project to assist the children. (Courtesy of Susan Blake) 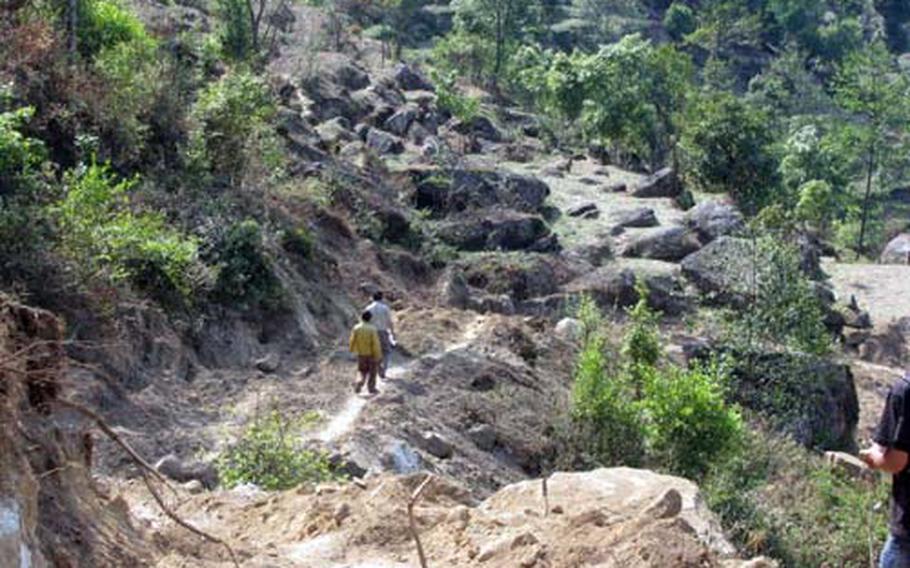 Nepalese school children climb the steep trail they use to get to school earlier this year. (Courtesy of Susan Blake) Susan Blake, a counselor at Sollars Elementary School at Misawa Air Base, Japan, describes a trip to Nepal that she took earlier this year. (T.D. Flack / S&S)

MISAWA AIR BASE, Japan &#8212; Can one person make a difference in the face of staggering poverty, rampant corruption and a society in which some families would rather sell their daughters into a life of human slavery than worry about another mouth to feed?

Susan Blake, a counselor from Sollars Elementary School at Misawa Air Base, Japan, found herself haunted by that question following a trekking expedition to Nepal.

She decided to see what she could accomplish. Her goal: raise the roughly $700 that it takes to pay, feed and house a schoolteacher in Nepal for one year.

But what she managed to do was pull a community together.

As of late May, countless volunteers at Misawa had raised more than $5,300 for what they called "Project Nepal."

"It&#8217;s been absolutely amazing, heartwarming, way beyond my wildest expectations," Blake said. "Our money goes a long way in Nepal."

Blake, a self-professed trekking fanatic, planned the trip of a lifetime for late last year. Before going, she met a Nepalese schoolteacher who was visiting Japan. When Blake learned just how desperate the conditions were at the teacher&#8217;s school, she vowed to deliver as many school supplies as she could carry.

And when she landed in Kathmandu, the man leading her expedition explained that his father, Mingma Sherpa, was heavily involved in working with schools. She returned to Nepal earlier this year to continue her work with Mingma Sherpa.

What she found on the visits stunned her. The schools were basically concrete buildings, some with dirt floors and no roofs. Teachers kept scraps of precious chalk in locked boxes. Most of the children had never seen a box of crayons.

She knew she had to do something.

"An education can be a ticket to a better life for a lot of people," she said.

She invited fellow educators at Misawa to discuss a fund-raising project. The school&#8217;s Parent-Teacher Organization helped sponsor the effort and members of the community quickly joined.

Christopher Born and Rhonda Jackson, student council advisers, brought the project to the kids at the school, who assisted.

The money began adding up. Instead of thinking about just one teacher, organizers began asking whether they could start a scholarship program to see a child go past the traditional fifth-grade education.

Blake said they&#8217;re also looking at the Nepalese Youth Opportunity Foundation, which works to "buy back" girls who have been sold into slavery. Child trafficking has long been a concern in Nepal, where less than half of all girls are literate and the country&#8217;s courts often discriminate against women, according to the NYOF Web site.

Blake said what&#8217;s impressed her most about the project at Misawa is the "power that everybody possesses and the generosity of this base."

She said it&#8217;s exciting "to have the opportunity to truly change a life and help, as we have so much."

For more information on the project, contact her at susan.blake@pac.dodea.edu.