Misawa community gears up to host thousands for air show 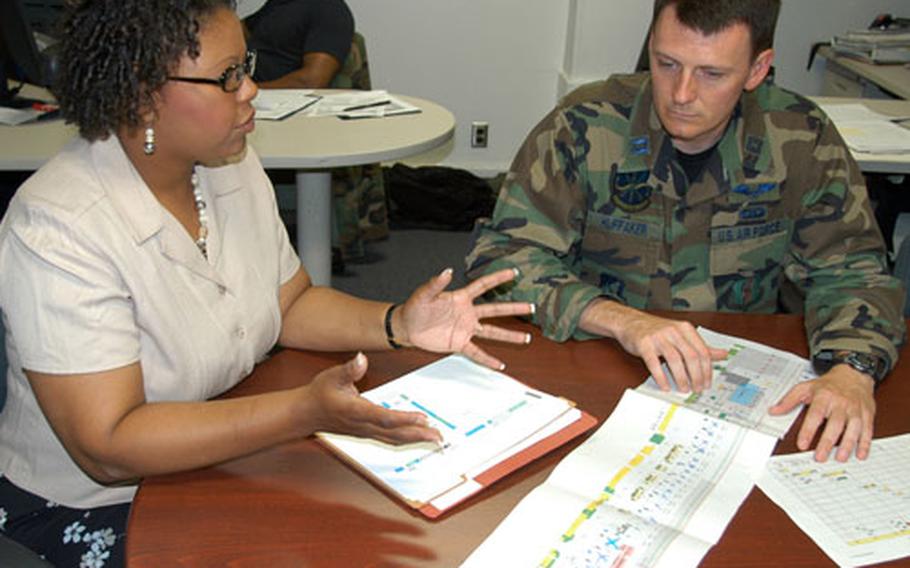 MISAWA AIR BASE, Japan &#8212; The planning starts in earnest every January for the largest joint, bilateral air show in northern Japan.

The air show marks the one time a year the base opens its gates to the public. It typically draws aviation buffs, curious onlookers and families with young children from all over Japan.

The morning schedule also includes acrobatics from an F-15J based at Chitose Air Base near Sapporo, a Navy F-18 show and a performance by the Pacific Air Forces F-16 demonstration team from Misawa. JASDF&#8217;s aerial demonstration team, the Blue Impulse, is to take to the skies at noon. Japan&#8217;s newest fighter, the F-2, is scheduled to perform before the festival winds down at 3 p.m.

The depth and breadth of the air show depends on Misawa&#8217;s fickle weather. Last year, dense cloud cover forced cancellation of most of the aerial stunts.

Organizers this year have added weapons loaders to the lineup: Both JASDF and U.S. Air Force personnel who load fighters with bombs for a living will demonstrate the process. They&#8217;ll first perform at show center &#8212; located in front of base operations and Building 1078 &#8212; after the opening fly-by and then throughout the day in a hangar, rain or shine. The base&#8217;s new indoor recreation center, Weasel&#8217;s Den, will be open, and a JASDF band is to perform indoors.

The festival will stretch out along Taxiway A &#8212; closest to main base &#8212; from across the Falcon Gate to just short of Hangar 949. Parked Japanese and U.S. military aircraft will pepper most of the tarmac&#8217;s length, though the exact number of static displays is still being determined.

Huffaker invited more than 30 U.S. aircraft and crew to the show, and so far about half have indicated they&#8217;re coming, he said, including Navy F-18s, F-15s from Kadena Air Base on Okinawa and F-16s from Osan Air Base, South Korea. Organizers are working with Yokota for a C-130 and C-21, and they hope to have for the first time an E-3 airborne warning and control system (AWACS) aircraft from Kadena.

Huffaker said the Air Force&#8217;s reduction in flying hours &#8212; due to wartime budget constraints &#8212; may mean fewer aircraft from other bases on static display this year.

Pilots and their aircraft from across the Pacific won&#8217;t be the only ones gathering for the Misawa Air Festival on Sept. 4. More than 50 private organizations on base have signed on to run booths, mostly selling food such as cakes, hamburgers, hot dogs, even turkey legs, said Deborah Savin, 35th Services Squadron private organization monitor.

&#8220;The intent is not to impact the local economy,&#8221; said Capt. Jeremy Huffaker, 610th Air Control Flight director of operations and this year&#8217;s air festival coordinator.

Groups can&#8217;t charge an arm and a leg for their products. Air Force guidance lists a maximum cost for various items, and private organizations must submit a price list to Savin for approval four weeks before the air show, she said. Vendors also must purchase public-event liability insurance off base in case of problems such as food poisoning, for example.

Private organizations each pay $215 for a booth, but $100 is refundable if the group provides two people for the foreign-object-debris (FOD) walk after the show. The money supports the air festival, which costs the wing between $5,000 and $7,000, Huffaker said. Those expenses include renting golf carts for security and medical patrols, purchasing signage and hosting a reception the night before the show for 50 to 80 visiting aircrew members.

Other rules that apply to private organizations: No selling alcoholic beverages or tobacco, and Americans can&#8217;t smoke or drink around the booths.

There is one blanket rule, however, for everybody at the air show.