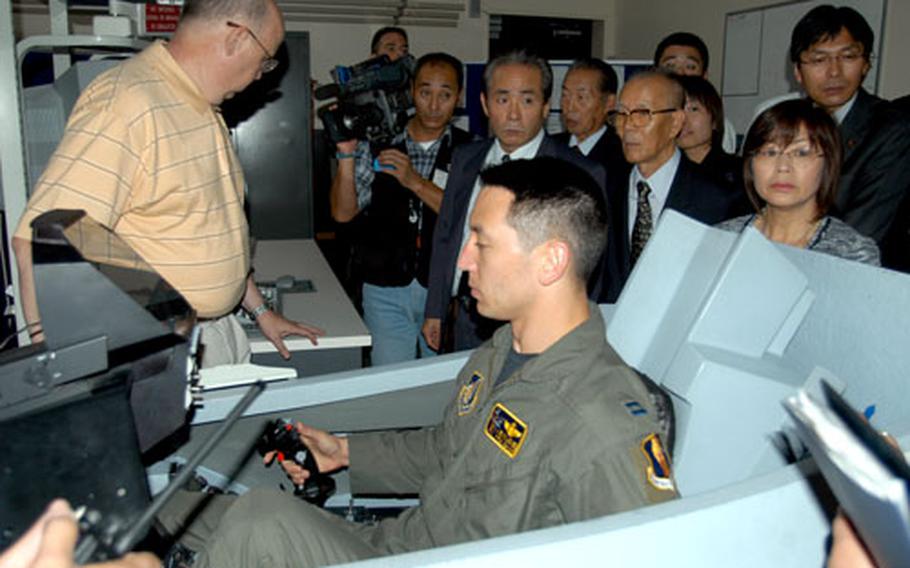 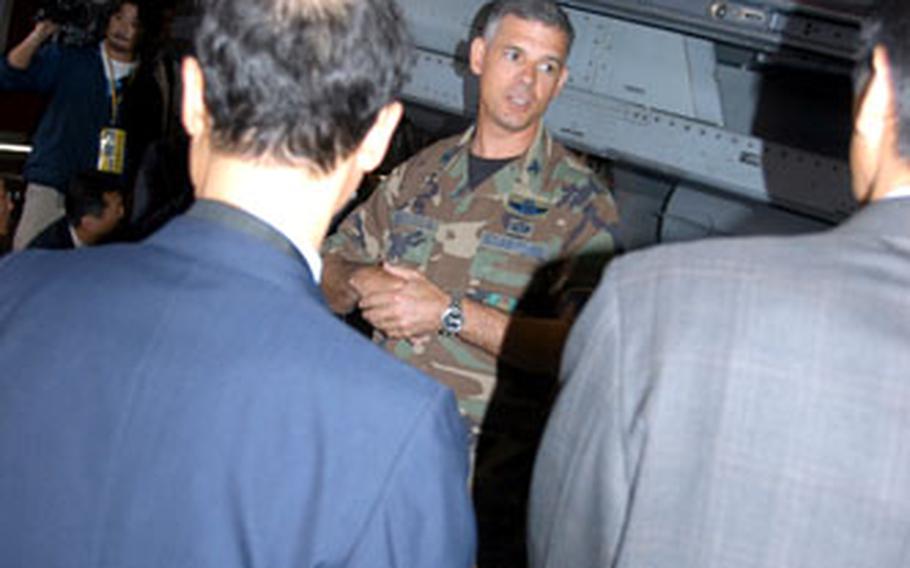 Col. Sam Angelella, 35th Fighter Wing commander, speaks to Japanese government and city officials Thursday. Angelella invited the delegation to the base to explain in more detail why a pilot had to drop a concrete munition in the Pacific Ocean in September, while reasserting the wing’s commitment to safety. (Jennifer H. Svan / S&S)

They peered up into an empty bomb rack, viewed the intricate wiring of a disassembled pylon, watched a pilot in a flight simulator and saw that, indeed, concrete bombs Misawa&#8217;s pilots train with are made, well, of concrete.

The session was an effort by 35th Fighter Wing commander, Col. Sam Angelella, to explain in more detail why a 14th Fighter Squadron pilot dropped a 2,000-pound inert bomb in the Pacific Ocean during a September training mission.

&#8220;We are doing everything we can to accomplish our mission safely every day that we fly,&#8221; Angelella told the first group.

While flying his F-16CJ over Draughon Range, a training area about 15 miles northeast of the base that U.S. and Japanese pilots use to hone bombing skills, the Misawa pilot tried to drop a concrete bomb but it failed to release.

The pilot continued flying and jettisoned the load into the Pacific Ocean over international waters, taking care to avoid fishing boats and other vessels, base officials said.

The wing&#8217;s investigation revealed an electrical problem was at fault, Angelella said.

More specifically, a computer card was defective, 2nd Lt. Nick Carter of the 35th Maintenance Squadron later told the group during a briefing in the armament shop.

The pilot was able to release the dummy bomb by using a backup system, Angelella and Carter explained.

&#8220;If it does not work the first time with the primary system, the pilot switches on his (cockpit) screen to a backup system to release through a different wire,&#8221; Angelella said, noting that when a bomb does not release the weapons system gives the pilot a &#8220;no release&#8221; message.

One official asked whether it was the pilot&#8217;s decision to drop the device over the ocean.

Angelella said the pilot could have flown back to base but it&#8217;s &#8220;our procedure&#8221; to release it over water rather than risking flight over a populated area.

Another official asked if the device would be retrieved. Last week, an association comprised of communities near Misawa city submitted a letter addressed to the base commander protesting the incident and asking that the bomb be collected, according to Too Nippo, a local newspaper.

U.S. Forces Japan, Angelella said, &#8220;is looking into it as it was put into international waters outside of 12 nautical miles.&#8221;

A question also was asked about any environmental harm.