Misawa commander responds to spike in DUIs on base 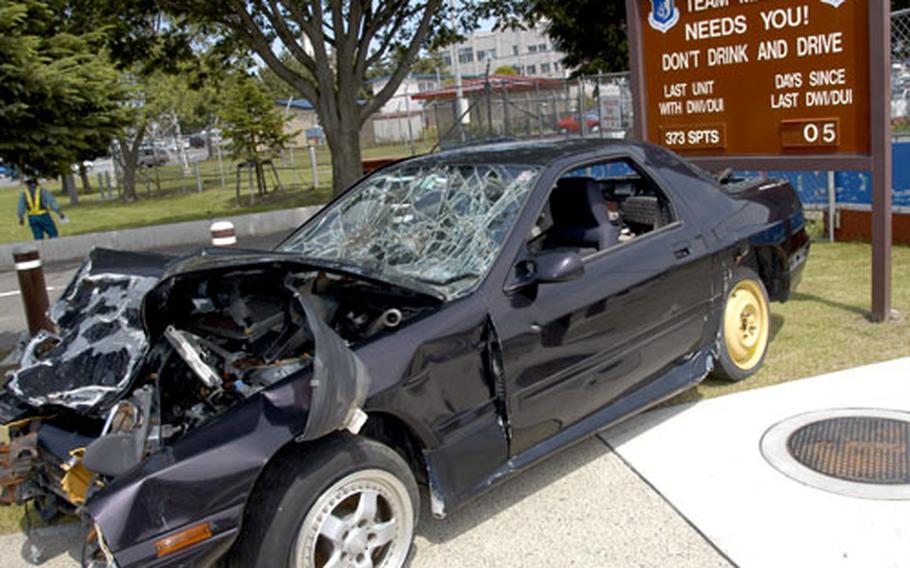 A smashed-up car was placed in front of the “DUI Hitboard” near the main gate at Misawa Air Base, Japan, on Friday as a reminder of the potential consequences of drinking and driving. (Jennifer H. Svan / S&S)

MISAWA AIR BASE, Japan &#8212; After a spate of recent drinking-and-driving incidents, base leadership here is pulling out all the stops &#8212; short of harsher punishments or restrictions &#8212; to get airmen to reverse the trend.

He said on the air he&#8217;s met with commanders, first sergeants and chiefs &#8220;to come up with creative ways to knock off the behavior.&#8221; The base newspaper reported Friday that ideas discussed at a leadership meeting earlier in the week included curfews, increasing the DUI checkpoints, banning alcohol in dormitories and making bars off-limits during early morning hours.

Extra perks won&#8217;t be handed out for a DUI-free weekend, he said, but he&#8217;ll continue giving DUI-free units a day off each month if mission goals are met.

&#8220;We&#8217;re going to leave that up to the group commanders,&#8221; Angelella said. &#8220;If a group commander administers punishment for misbehavior, it has a little bigger effect than if a squadron commander administers it. I can&#8217;t tell a commander what kind of punishment to give &#8212; because that would be undue command influence &#8212; but everyone knows how important it is to me. They have all pledged to get the word out.&#8221;

A DUI at Misawa automatically results in a year&#8217;s loss of base driving privileges and can include the loss of a stripe, financial penalties and, in more serious cases, a summary court-martial with a maximum punishment of 30 days in jail. A blood-alcohol-content of 0.03, Japan&#8217;s legal intoxication level, also is the legal threshold on base, officials said.

Some airmen said they think the stakes need to be even higher.

Staff Sgt. Charles Jackson, an aerospace propulsion specialist with the 14th Fighter Squadron, said there&#8217;s no excuse for a DUI because airmen constantly are reminded of the consequences and are told the options available to get a ride home.

If anyone from the 35th Aircraft Maintenance Squadron gets a DUI, the whole unit must appear the next morning in front of the commander in full service dress, he noted.