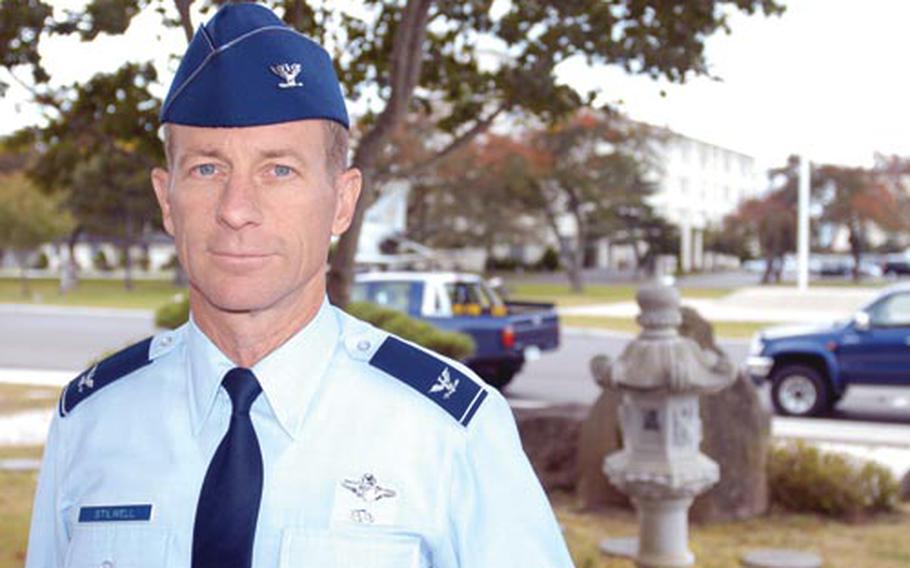 New 35th Fighter Wing Commander Col. David R. Stilwell believes in giving airmen responsibility and seeing what they do with it. In his second tour of Misawa, Stilwell hopes to encourage airmen to get out and see northern Japan. (Jennifer H. Svan / S&S)

MISAWA AIR BASE, Japan &#8212; Col. David Stilwell has made few changes in his first months as 35th Fighter Wing commander.

"I like to sit back and watch before I start changing things," Stilwell said in an interview this week.

One thing he has his eye on, he said, is the base&#8217;s liberty card program, which generally restricts airmen ranked E-4 and below to the installation from midnight to 5 a.m. weekdays and 1 to 5 a.m. on weekends.

"To shotgun everybody based on the actions of a few is not fair," Stilwell said.

The liberty card program was implemented two years ago after servicemembers racked up five drunken-driving incidents in one weekend.

"I like giving people responsibility and seeing what they do with it."

From May to August this year, base personnel received four DUIs.

"We just had a couple of unfortunate events happen in a short period of time," he said, and "it&#8217;s a small number" getting into trouble.

His goal, however, is zero DUIs, he said.

The commander said there&#8217;s nothing wrong with drinking responsibly, but he&#8217;d like airmen to go beyond the downtown bars and explore all that northern Japan has to offer.

"There&#8217;s so much more to do in Japan than sit at the bar, drink yourself to oblivion and drive home," he said.

Stilwell and his family are on their second assignment at Misawa.

From June 1995 to July 1999, Stilwell was an F-16 instructor pilot and flight commander with the 13th Fighter Squadron, followed by a turn as the Pacific Air Forces demonstration pilot.

It was the one Air Force assignment he wasn&#8217;t ready to leave when the time came.

He met his closest Air Force friends, including vice wing commander Col. Robert Craig, during his first tour at Misawa, he said.

The isolated "setting here makes you focus on the people around you," he said.

Stilwell, 46, grew up in Los Angeles. He got his start in the Air Force in 1981 as a Korean linguist. He wanted to be a jet mechanic, but the recruiter told him there were no open slots but that based on his test scores, he could be a linguist.

He remembers the strangeness when he stepped off the plane Nov. 7, 1981, at Osan Air Base, South Korea, a feeling he believes is felt by young airmen who come from halfway across the world to Misawa.

During his first commander&#8217;s call with airmen here, he told them he appreciates that 99 percent of them adjust to their new surroundings and leave Misawa a better place than they found it.

But don&#8217;t expect to see Stilwell only at commander&#8217;s call. The other morning he ran with the 35th Civil Engineer Squadron during their regular physical training.