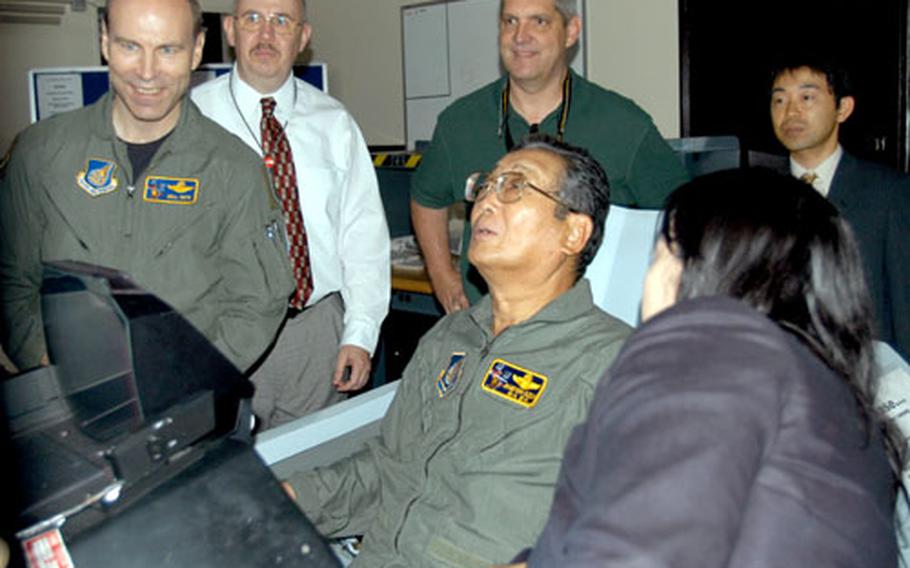 Rew on Tuesday invited Suzuki to be &#8220;wing commander for a day,&#8221; offering Misawa&#8217;s long-time mayor an inside &#8212; albeit condensed &#8212; look into what it means to be responsible for 10,000 servicemembers, civilians and dependents assigned to the 35th Fighter Wing, Naval Air Facility Misawa and various tenant commands.

After only a few hours of wearing a commander&#8217;s one-star flight suit and shadowing Rew, Suzuki concluded the job was hard.

Flying, even in a simulator, was troublesome, he said.

Rew tried to put the experience into perspective: &#8220;The average pilot takes over two years to learn how to fly an F-16. Two minutes for the mayor of Misawa.&#8221;

But the swap also represents, both leaders said, a strong friendship first forged between the two when Rew was 35th Operations Group commander from June 1998 to June 2000.

Suzuki told the group he&#8217;s been Misawa mayor for 18 years and believes in co-existence and co-prosperity between Misawa Air Base and the city.

In order to achieve those goals, there are certain rules the airmen should heed, he said.

Rew invited Suzuki to his monthly working lunch with squadron and group commanders. Each of the group commanders was to report to Suzuki on activities within their group, Rew said, noting the menu was the mayor&#8217;s favorite of club sandwiches and vanilla ice cream.

Before heading off to lunch, Suzuki said he was most impressed by the maintainers&#8217; work and the fact they could fix both small and large parts, from helmet components to engines.

He understood that pilots and maintainers must &#8220;do their best in order for Gen. Rew not to be worried or concerned.&#8221;

Rew will next command the 57th Wing at Nellis Air Force Base, Nev.