Misawa chaplain to cruise away with top Pentathlon prize 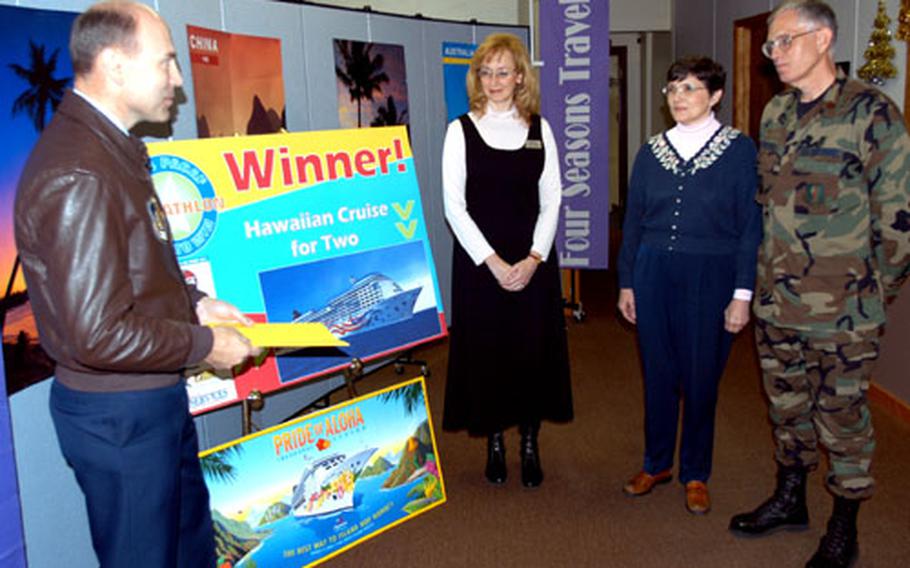 MISAWA AIR BASE, Japan &#8212; Chalk it up to divine intervention, sheer luck or Fridays spent at the wood shop, but Maj. Wendell Brenneman and his wife, Deb, are going on a cruise.

Brenneman, the senior Protestant chaplain at this northern Japan base, was one of three &#8220;five level&#8221; grand-prize winners in Pacific Air Forces Pentathlon, an online board game that rewarded players for using services-run organizations, from clubs to veterinary clinics, at U.S. air bases in the Pacific.

Brenneman won a seven-day Hawaiian cruise for two, with round-trip airfare from Misawa to Hawaii and three nights&#8217; lodging at a hotel. He and his wife plan to go in March.

&#8220;I&#8217;ve always wanted to do a cruise, so this is really exciting,&#8221; Brenneman said Wednesday as base officials presented his prize packet.

In its second year, the contest is designed to enhance awareness about services and award services patrons, according to information from Misawa&#8217;s 35th Services Squadron. Services organizations gave out tickets to patrons between Aug. 1 and Oct. 31. To play, participants registered at www.pacfive.com and logged their game piece numbers. By earning more game pieces, players could move through five different levels and qualify to win increasingly more expensive prizes in a drawing. Instant prizes such as T-shirts, movie tickets and DVDs also were awarded at each level.

Brenneman said the cruise is the first prize he&#8217;s ever won. The chaplain said he usually picked up a ticket on Fridays when he spent part of his day off at the Skills Development Center&#8217;s wood shop. He also earned game pieces when eating at the club for lunch and logging workouts on FitLinxx, a computerized fitness monitoring system available at Potter Fitness Center.