Misawa change of command a repeat 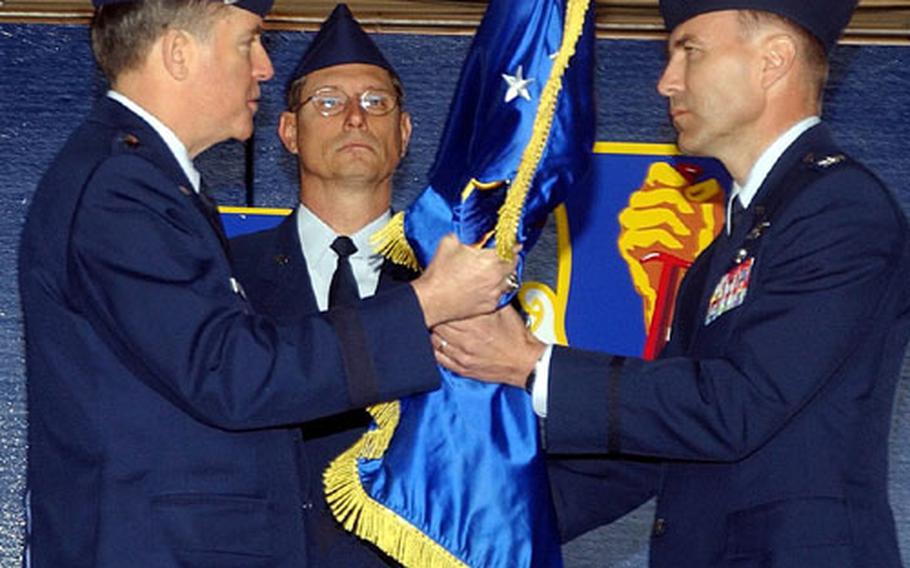 The handover marks the second time that Rew follows in the footsteps of Atkins: In June 2001, Rew assumed command from Atkins of the 20th Fighter Wing at Shaw Air Force Base, S.C.

&#8220;Taking the flag today from Gen. Atkins is clearly d&#233;j&#224; vu for me,&#8221; he said to the hundreds of airmen and dozens of senior leaders and Japanese civic and military officials gathered in an open-air hangar. &#8220;I know how tough an act it is for the Rews to follow the Atkins. Because of that experience, though, I have the peace of mind knowing that I&#8217;m inheriting a wing in top form, a wing that has proven itself in the fire of combat overseas, and also a wing that&#8217;s proven itself in very, very tough inspections&#8221; at home.

Rew said he and his family were excited about returning to Misawa, where the brigadier general-select commanded the 35th Operations Group from June 1998 to June 2000.

&#8220;The impressive list of projects and accomplishments planned and executed under D.T.&#8217;s watch firmly illustrates why Misawa is lauded as the ideal Air Force assignment,&#8221; said Waskow, who later bestowed the outgoing commander with the Legion of Merit.

Atkins moves on to South Korea, where he&#8217;ll serve as vice commander of the 7th Air Force and U.S. Air Forces Korea, and chief of staff for the Air Component Command at Osan Air Base.

In his farewell speech, Atkins ran down a list of his fondest Misawa memories, from spending New Year&#8217;s Day in the home of Misawa Mayor Shigeyoshi Suzuki to catching salmon at Shimoda&#8217;s salmon fest.

&#8220;Truly, this is a sad day to depart but I depart with a huge smile on my face with the knowledge that this wing, that this installation, is under the leadership of Bill Rew,&#8221; he said.

Rew is a command pilot with more than 3,800 flight hours in the F-16A/C, T/A-38 and T-37 aircraft. In his last assignment at Shaw, he served as director of operations, Headquarters 9th Air Force and U.S. Central Command Air Forces.