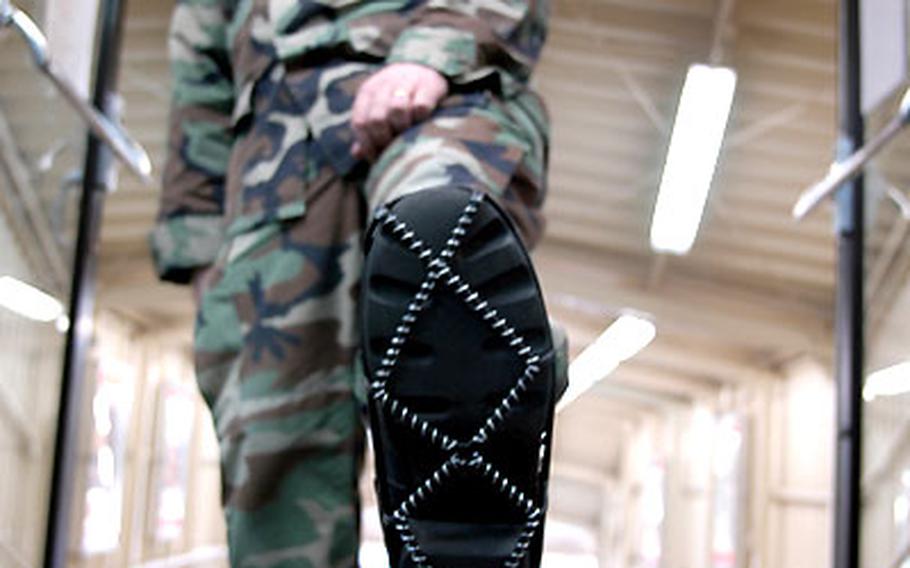 As they do every year, base officials this week are reminding residents to be safe this winter &#8212; on the roads, sidewalks, parking lots, slopes and even in their homes.

The briefings are mandatory for active-duty troops and Defense Department employees assigned to the installation. Family members are encouraged to attend.

Winter in northern Japan can be brutal. Annual snowfall averages 125 inches. Last year&#8217;s tally was 158 inches. The heaviest snowfall typically is seen in December, January and February, though icy road conditions tend to be a mainstay throughout the winter at dawn and dusk, base officials said.

The base began holding the annual safety briefings after three Misawa airmen in 1996 suffocated in their tents while winter camping in the Hakkoda mountains. The airmen left on a kerosene stove that ate up the oxygen in the tent as they slept.

There hasn&#8217;t been a winter fatality since a military passenger and Japanese driver were killed in a February vehicle collision, but last year was a particularly bad year for winter drivers.

From November to April, Americans assigned to Misawa were involved in 356 fender-benders. During the same period there were 28 major vehicle accidents causing either injuries or at least $10,000 in property damage, according to statistics from Tuesday&#8217;s briefing.

Drivers can buck the trend by following at least two car lengths behind, ensuring their tires have adequate tread, and regularly replacing windshield wipers, Holloway said.

Starting Wednesday &#8212; and lasting through March 31 &#8212; all vehicles on Misawa must either have four snow or all-weather tires, or chains on the two drive wheels.

On foot, &#8220;slips, trips and falls&#8221; in icy parking lots and on ski slopes are one of the leading causes of emergency room visits at Misawa during the winter, Holloway said. Base officials touted slip-on traction devices for shoes, available for sale at both the base exchange and Outdoor Recreation, to help stay upright.

Advice for skiers and snowboarders was to be smart and stay in their lane. Ron Stark, 35th Services Squadron&#8217;s Outdoor Recreation program coordinator, noted that ski and snowboard helmets can reduce the severity of head injuries. But bike helmets on kids, something he&#8217;s seen while skiing, don&#8217;t offer proper protection on the slopes.

For those venturing beyond the resorts to the backcountry, Stark advised to have a plan and leave it with someone, &#8220;so search and rescue doesn&#8217;t find you at Burger King.&#8221;

Winter rules and safety pointers to keep in mind this winter at Misawa:

&#182; Four snow or all-season tires, or chains on the two drive wheels, are required for all road vehicles from Nov. 15 to March 31. Studded tires are prohibited on paved roads in Aomori Prefecture, with a 100,000 yen ($1,000) fine for violators;

&#182; Snow and ice must be cleared from vehicles before driving, including the light lenses, hood, trunk, roof, windows and windshield.

&#182; Clear sidewalks 150 feet from base facilities; sidewalks, including those in housing areas, must be cleared by 8 a.m.

&#182; Housing residents are required to clear snow from their curbs, gutters and parking spots, and should clear the nearest fire hydrant.

&#182; Dormitory parking lots are assigned a day of the week for plowing; unattended vehicles will be towed.

&#182; Consider packing blankets, a first-aid kit, snow shovel, extra food and ice scrapers in car in case of an emergency.

&#182; Dress in warm, loose layers that are waterproof and windproof if planning to be outdoors for an extended period.

&#182; Slow down on the roads; vehicle accidents are a huge problem at Misawa in winter.

Winter awareness briefings at Misawa continue at the Richard Bong Theater on:

The briefings are mandatory for all DOD personnel at Misawa. Dependents may attend any session.