Misawa bowlers strike up a bond with locals 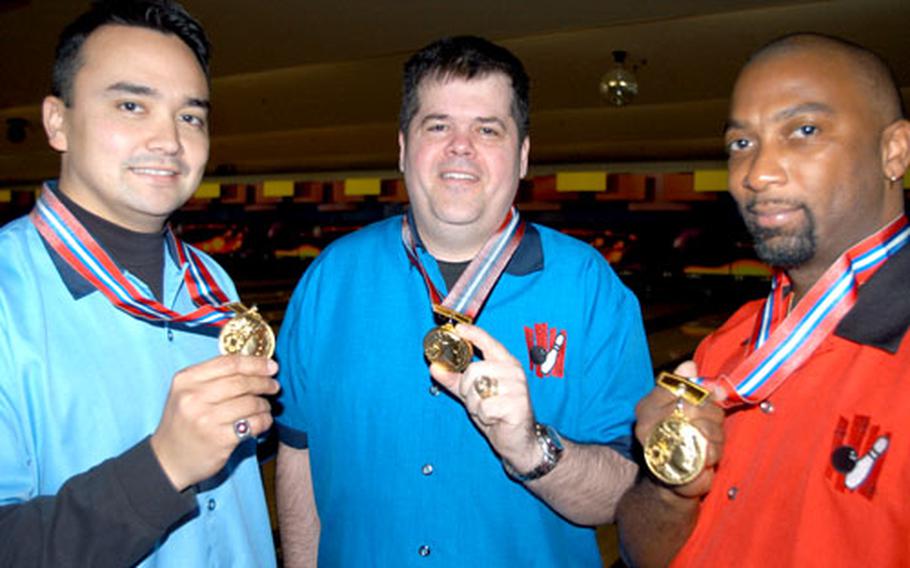 MISAWA AIR BASE, Japan &#8212; For most of their lives, bowling has been many things: a passion, a game shared with family, a hobby, a competitive outlet, even a source of pride.

For three American bowlers at this northern Japan base, throwing strikes is now also a bridge between two cultures.

Civilian Kevin Radford, 39, a 35th Fighter Wing accountant, said the thrill of competition has kept him bowling for 20 years.

Staff Sgt. Shawn Matter, 31, an aircrew egress systems craftsman, first picked up a bowling ball at 7. It&#8217;s been attached to his fingers ever since; his wicked hook has given him the nickname &#8220;The Crank.&#8221;

Senior Master Sgt. Joe Carney, 43, an information systems supervisor, started bowling with his dad about the same time he started grade school. As a teen, he and his sister teamed with their parents in a mixed adult league.

Chunky bowling rings earned from perfect games adorn Carney&#8217;s fingers. He was flawless three times &#8212; in bowling that means a score of 300 and 12 consecutive strikes. But he&#8217;s most proud of the 800-point milestone, when he was almost perfect for three straight games.

He and Matter have also bowled a 300 at Misawa &#8212; two of just five 300 games bowled in the history of the base bowling alley.

Radford, Matter and Carney now have a team effort to add to their bag of bowling prizes.

Representing Misawa Bowl in downtown Misawa, they took first in Aomori Prefecture&#8217;s largest annual bowling tournament Nov. 19 at Aomori Bowl. Their team score vaulted Misawa Bowl into first place for the first time, giving them the much sought-after 4-foot trophy that stays with the winning bowling house for a year.

The effort earned them a write-up and color photo in one of the local Japanese newspapers, plus a case of green tea, hand towels and fancy medals. In Japan, &#8220;it&#8217;s primarily about recognition&#8221; and not the prizes, Radford noted.

If anything, the Americans hope their win helps forge even closer bonds with the Japanese.

About 18 months ago, when Radford and Staff Sgt. Stacy Green asked about bowling in Misawa Bowl&#8217;s league, the response was &#8220;OK, but pay the weekly 1,500-yen league fees a year in advance,&#8221; Radford said. The implication, he said, was that the Japanese bowlers doubted the Americans would stick with it.

Now, up to 15 Americans take part in Misawa Bowl&#8217;s league and tournaments. Radford, Matter and Carney say they hope to revive the Japanese-American Friendship League, in which teams alternate weekly play between downtown and the base.

Children ages 2 to 18 can participate in the youth bowling league at Walmsley Bowling Center from 9 a.m. to noon every Saturday. The first hour is hands-on coaching and practice, followed by league bowling.

The cost is $8 per Saturday, which offsets the cost of bowling, team jerseys and trophies.

For adults, league play is varied and is held almost every evening of the week. Call the bowling center at DSN 222-7731 for more information.

Bowlers can sign up now for the second annual Western Pacific U.S. Bowling Congress Tournament, to be held Memorial Day weekend at Camp Zama and Yokosuka Naval Base near Tokyo, according to civilian bowler Kevin Radford. A bus will take bowlers from Misawa. Participants must have status-of-forces-agreement sponsorship.

Contact Radford at DSN 226-9065 or Kevin.Radford@misawa.af.mil for more information.

For off-base bowling, Misawa Bowl is near the intersection with McDonald&#8217;s in downtown Misawa, in the opposite direction from the Daiei department store. Games there cost 400 yen each.