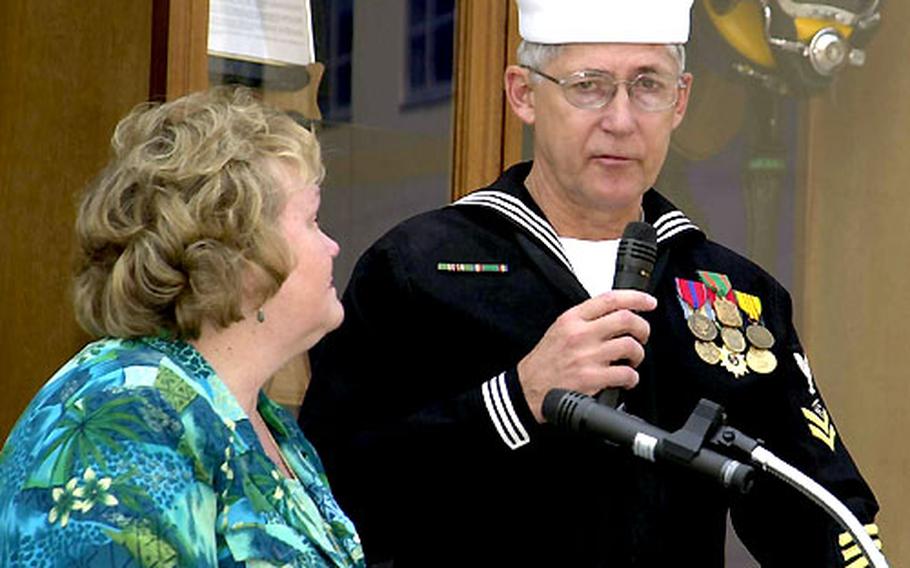 Betty and John Draughon at Monday&#39;s ceremony at Misawa Air Base, Japan, where a building was renamed in honor of their son, who died two years ago during F-16 salvage operations. (Wayne Specht / S&S)

Betty and John Draughon at Monday&#39;s ceremony at Misawa Air Base, Japan, where a building was renamed in honor of their son, who died two years ago during F-16 salvage operations. (Wayne Specht / S&S) 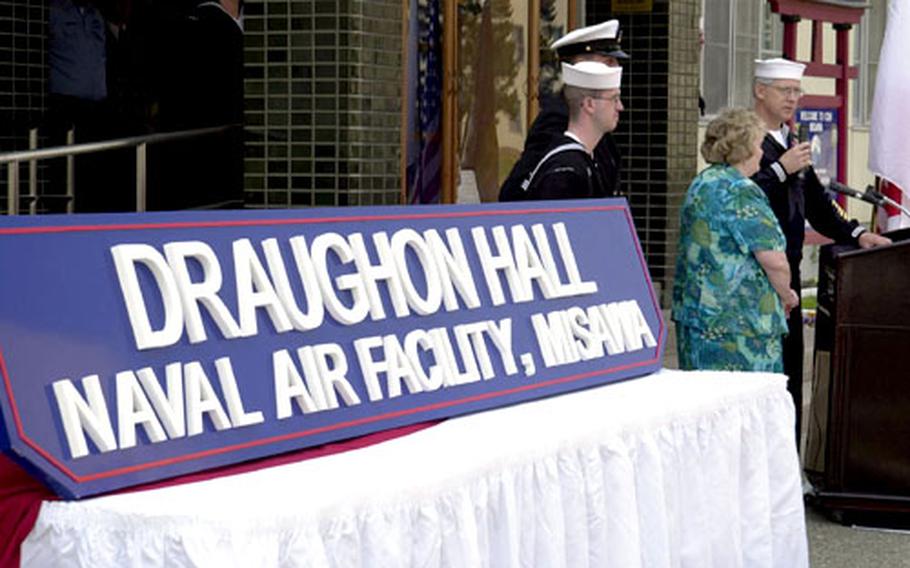 MISAWA AIR BASE, Japan &#8212; Two years to the day a diving mishap claimed the life of their son Matthew, John and Betty Draughon held hands under a bright spring sky here Monday as Navy officials dedicated a building in their son&#8217;s name.

The Naval Air Facility&#8217;s Combined Bachelor Billeting building 520 was named Draughon Hall in honor of then-Seaman Matthew Draughon who drowned May 5, 2001, while salvaging the wreckage of a Misawa F-16 that crashed into the Pacific Ocean near Ripsaw training range near the base.

&#8220;For the first time in two years, our tears are tears of joy and gratitude, not those of sorrow,&#8221; a tearful Betty Draughon told a gathering of Navy and Air Force servicemembers as she stood at a podium at her husband&#8217;s side.

&#8220;We are overwhelmed,&#8221; said John Draughon wearing his Navy uniform bedecked with seven medals he earned in 32 years of active and reserve service.

Seaman Draughon was 21 years old on what was supposed to be the final day of a 16-day salvage effort for the Sasebo-based USS Safeguard salvage vessel.

A Navy investigation would later hold the Safeguard&#8217;s top leadership responsible for a lengthy list of discrepancies that led to the mishap &#8212; including failure to take into account diving fatigue factors, deteriorating weather conditions and poor risk-management procedures.

Draughon disappeared as he and another Safeguard diver, Petty Officer 3rd Class Bryan Gordon, fought strong ocean currents during the wee hours of the morning.

Investigators determined the umbilical lines supplying air and communications to Draughon and Gordon became wrapped around the ship&#8217;s anchor chain.

Strong currents whipped the chain that struck Draughon, causing him to lose his diving helmet. Gordon was rescued.

Three weeks of searching failed to turn up Draughon&#8217;s body until June 5 when his helmetless body washed ashore about a mile south of Ripsaw range. A Navy autopsy determined the diver &#8220;drowned due to accident.&#8221;

The Draughons traveled from their home in Hendersonville, N.C., for Monday&#8217;s ceremony.

Misawa Naval Air Facility commanding officer, Capt. Richard High, said the ceremony was kept simple &#8220;not to eulogize but to honor the memory of Seaman Draughon.&#8221;

Following his death, Draughon was posthumously promoted to petty officer third class and awarded the Navy and Marine Corps medal for his service.

That medal, along with a diving helmet and suit he wore while assigned to the Safeguard, were enclosed in a display case unveiled during the ceremony.

Also on Monday, the Navy here announced Air Force Chief of Staff Gen. John P. Jumper had approved the renaming of Ripsaw training range to Draughon training range in honor of the sailor.

A deeply religious couple, John and Betty Draughon said after the ceremony they have never felt closure was forthcoming following the loss of their youngest child.

Having served aboard the USS Florikan, a now-decommissioned Navy submarine rescue ship deployed to Danang, South Vietnam, in 1969, John Draughon said he was pleased that his son followed in his older brother&#8217;s footsteps by joining the Navy in 1998.

Chief Petty Officer Robert Godfrey, one of three USS Safeguard crewmen who attended the ceremony, said it was a moving one.

Since the accident two years ago, Godfrey said changes have been made aboard the ship to prevent a recurrence of the tragedy.

Betty Draughon said the family still has unanswered questions about the death of their son.

The master diver involved in the incident is appealing action taken against him as a result of the investigation.