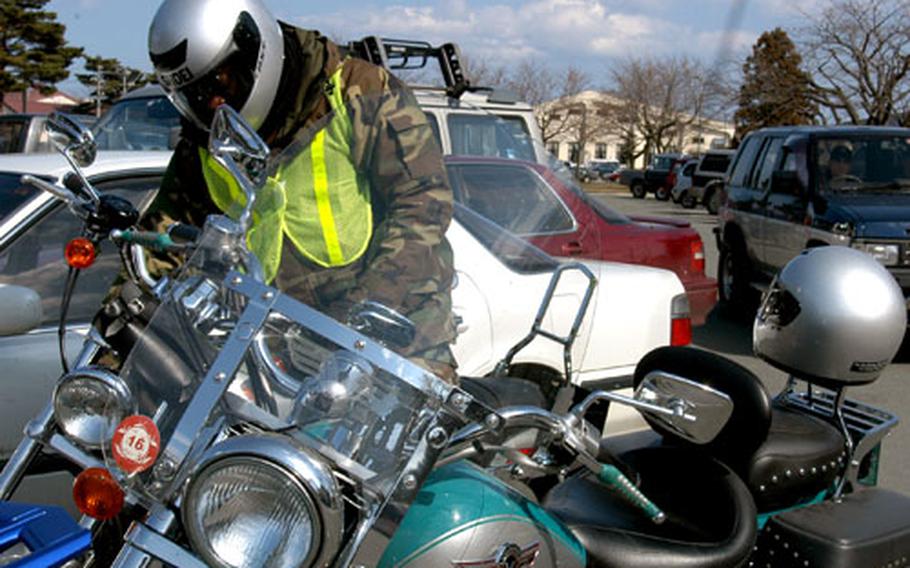 Staff Sgt. Tony Bunting parks his motorcycle outside Richard Bong Theater at Misawa Air Base, Japan, on Thursday before heading into a mandatory motorcycle briefing. It was the first day of Misawa’s riding season, which lasts until Nov. 15. (Jennifer H. Svan / S&S)

MISAWA AIR BASE, Japan &#8212; The hogs were out at this northern Japan base Thursday, the first day of the 2005 motorcycle riding season.

Chrome. Leather. Big engines. And, of course, the orange vest.

They were reminded of the current rules of the road, from proper eye protection and full-fingered gloves to training requirements and changes in Japanese law. Here&#8217;s what&#8217;s new this year:

USFJ is requiring certified motorcycle riders new to Japan to complete a road-skills test and local conditions briefing before riding. &#8220;If it&#8217;s your first riding season in Japan, you can&#8217;t ride until you get in&#8221; this training, said Lt. Col. Franz Plescha, the wing&#8217;s safety chief.As of April 1, bikers now can ride with a passenger on Japan&#8217;s expressways as long as they&#8217;ve held a motorcycle license for more than three years. Double-riding is still prohibited on toll roads through cities and where signs indicate.Motorcycles imported from the United States to Japan &#8212; including those shipped with household goods &#8212; must pass an emissions test, a process costing about $950. The hitch: The closest testing site for Misawa riders is in Tokyo.Pacific Air Forces&#8217; regulations that went into effect last year require that all riders assigned to PACAF bases wear a reflective orange or lime-green vest, both on and off base.

Plescha noted those who need the course can still ride but need to make arrangements for the training.

First-time riders in Japan can knock out the USFJ-required road skills test at that time, Plescha said, and can do so sooner if they find an instructor to give them the training.

One airman remarked that it was hard to keep all the rules straight; another said that the Air Force was going to make it &#8220;a pain&#8221; for them to ride at all.

That&#8217;s precisely the point wing leaders tried to make Thursday in the face of growing motorcycle fatality and accident numbers across the Air Force.

According to information presented at the briefing, since 2002 about two airmen per month have been killed on motorcycles; about 50 percent are from the Air Force&#8217;s youngest ranks E-1 to E-4.

Misawa has lost three airmen on bikes since 1996.

The most recent was Tech. Sgt. Adam Peck, who died in July 2003 after colliding with a truck about a mile from base.

Fatalities are down about 50 percent in 2005, but at many northern-latitude bases such as Misawa, the riding season is just revving up.

Brig. Gen. Bill Rew, 35th Fighter Wing and Misawa base commander, related some of his own experiences riding road bikes in his early 20s, a pursuit he put aside while raising a family after a near collision with a garbage truck that pulled out in front of him.