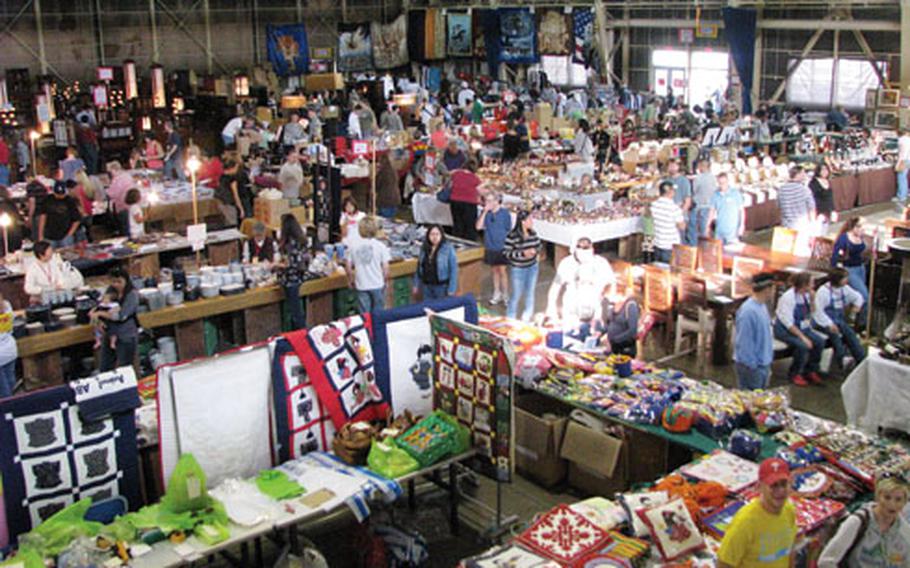 Volunteers get a first crack at shopping before Hangar 949 is opened to the general public. They&#8217;re also entered into a drawing for prizes donated by the vendors.

This year&#8217;s bazaar will feature about 30 different vendors from the region, including South Korea, Hong Kong and Japan.

And for the first time, people who donate specific food and snack items also will be considered volunteers, and they will be entered in their own drawing.

Volunteers are needed to help set up from 3 to 11 p.m. on March 20, to drive the vendors to and from their hotels, to work side-by-side at the tables, to work the sales tickets and other data entry, and to translate for the Japanese shipping companies and vendors. The table shifts are from 9:45 a.m. to 1 p.m. or 12:45 to 5 p.m. March 21-22.

Volunteers age 14 and older can work by themselves; 12- and 13-year-olds can work side-by-side with a parent.

Baby strollers won&#8217;t be allowed inside the hangar.

To pay for bazaar items, shoppers can use U.S. dollars, Visa, Mastercard or checks.

The club uses the semi-annual sales to raise money for the community. Last year&#8217;s fall bazaar put a little more than $25,000 into the club&#8217;s coffers, according to Valerie Frost, club publicity chairwoman. Those funds flow back into the community in the form of scholarships, tuition assistance, and support for programs seeking financial aid.