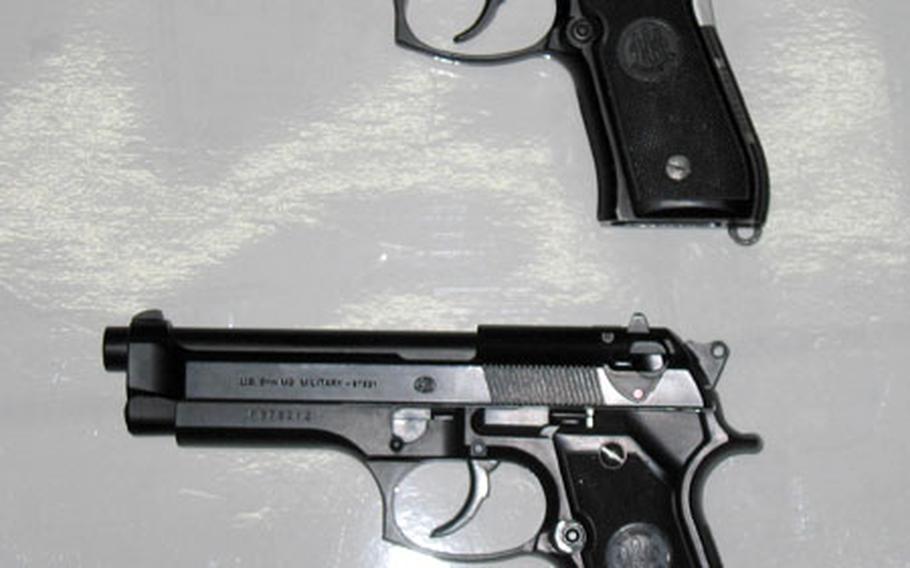 The top gun is real; the bottom one is a toy. Misawa law enforcement said it’s difficult to tell them apart. (Courtesy of 35th Security Forces Squadron)

Two occurred in the afternoon on April 20 in the commissary parking lot, according to 35th Security Forces Squadron officials. One woman was hit in the back of the leg by a metal pellet. She retrieved the object and reported it to law enforcement.

Another woman also was hit and sought treatment at the base emergency room for a minor injury. She didn&#8217;t recover a pellet, but medical officials told investigators that it appeared her wound was caused by a similar projectile.

On April 15, a small object is believed to have struck a 4-year-old girl at the children&#8217;s airplane park by Yosemite and Yellowstone drives. She had a welt on her shin, but no pellet was found.

Base investigators said they don&#8217;t know who may have fired the pellets, but they stress that pellet, BB, air and unmarked toy guns are illegal on base.

He said toy guns with an orange cap that don&#8217;t shoot are permitted on base. The community standards, he said, ban any weapon that fires a projectile.

He urged anyone with information about the shootings to call Staff Sgt. Robert Hawkins at DSN 226-2239, or after hours, the law enforcement desk at DSN 226-3600. Anonymous tips are OK.

Security Forces also has set up an amnesty program where residents can turn in the weapons to Hawkins with no questions asked.

The weapons are dangerous in the wrong hands and should not be mistaken for toys. Col. Greg Johnson, 35th Medical Group chief of medical staff, recently said in the base newspaper that based on the type of gun and where the pellet impacts the body, &#8220;there is a possibility of loss of eyesight or even death.&#8221;

In recent months, the squadron has confiscated seven toy guns that present another potential problem: that of mistaken identity.

U.S. federal toy gun laws require makeshift firearms to bear a solid &#8220;blaze-orange&#8221; plug at the tip of their barrel or to be painted a different color, but no such regulations exist in Japan, base officials said.

Fake handguns that bear a striking resemblance to the real thing can be bought at off-base toy stores. Some even are branded with a serial number and the words &#8220;U.S. military M-9,&#8221; said 1st Lt. Christopher Honeycutt, Security Forces operations officer.