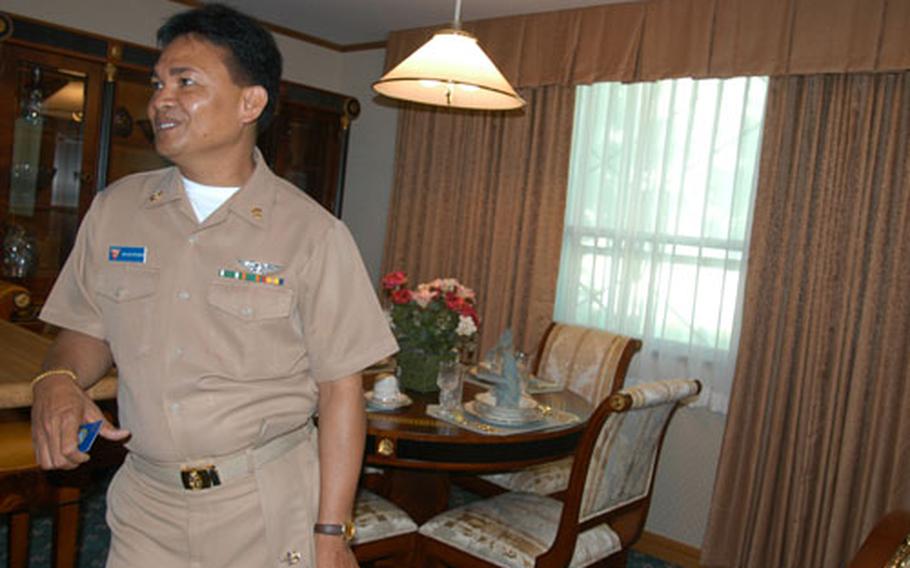 Guests who stay in the Navy&#8217;s combined bachelor housing at this northern Japanese base get five-star treatment.

It&#8217;s like lodging in the Holiday Inn but cheaper: $10 a night for most sailors. Distinguished visitors pay more &#8212; up to $45 a day &#8212; but they get fine Noritake china, a bowl of fresh fruit and flat-screen televisions in their rooms.

But then, Misawa NAF has one of the finest lodging facilities and barracks in the Navy; officials were notified this week that the command will receive the prestigious Admiral Elmo R. Zumwalt Award for Excellence in Bachelor Housing for 2004.

Navy officials say they believe that streak is a first among Navy commands.

More than one command can earn the Zumwalt in a given year but to be eligible, an installation must achieve a five-star rating for both its bachelor permanent residence and transient lodging facilities.

Magistrado has been a part of two of Misawa NAF&#8217;s Zumwalts, including the most recent. One of the first changes he made was to replace bunk beds in the barracks with full-size beds, and reduce occupancy from two to one sailor. He wanted the rooms to be different from the shipboard.

During his almost three-year tenure, the barracks received about $7 million of renovations, to include new furniture, carpet and wallpaper. The latest addition is a &#8220;super DV&#8221; room, for distinguished visitors. The spacious quarters includes an office and two bathrooms; it&#8217;s the only base that accommodates with air-conditioning, Magistrado said.

Magistrado said the key to the five-star rating is its quality of life and customer service. &#8220;It&#8217;s all about teamwork,&#8221; he said of his staff of 21, including sailors and Japanese civilians.