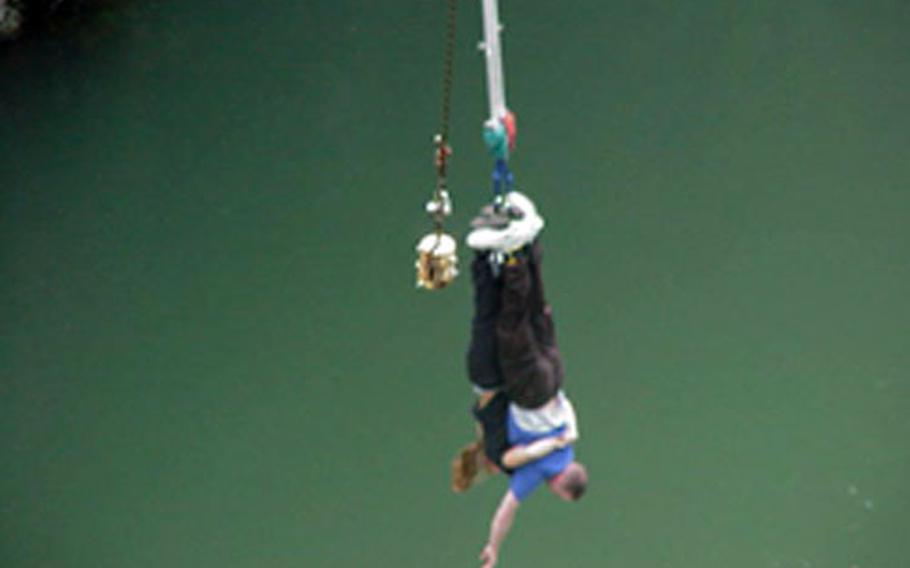 A servicemember from Misawa Air Base, Japan, hangs from a bungee jump near Sendai, Japan, during a May excursion with Single Airman Xtreme. (U.S. Air Force)

A servicemember from Misawa Air Base, Japan, hangs from a bungee jump near Sendai, Japan, during a May excursion with Single Airman Xtreme. (U.S. Air Force) 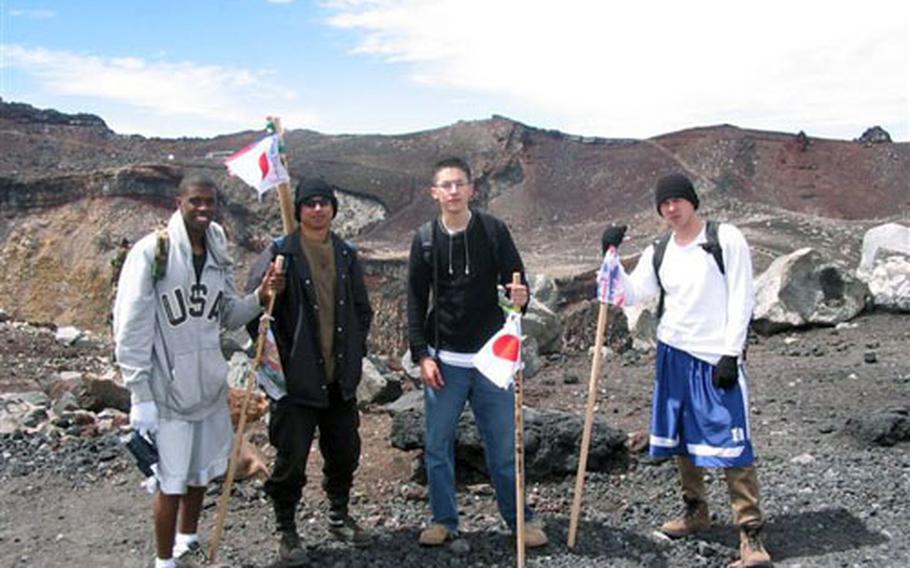 Servicemembers with Single Airman Xtreme from Misawa Air Base, Japan, stand atop Mount Fuji during an August climbing trip. The program aims to provide affordable opportunities for single personnel E-4 and below to see Japan. (U.S. Air Force)

He&#8217;s among hundreds of Misawa airmen to see Japan through Single Airman Xtreme, a program for single servicemembers E-4 and below.

The program began in summer 2004 as EXTREME, the brainchild of former base commander Brig. Gen. Dana T. Atkins. Among its first outings: a shopping trip to Aomori and a visit 70 miles south to Morioka Zoo. The group also adopted the name Single Airman Xtreme &#8212; or SAX.

SAX now is available to all unaccompanied personnel E-4 and below from any service, though participants must be assigned to Misawa or on temporary duty here. For fiscal 2006, SAX&#8217;s budget grew to just more than $70,000, from funds Japan provides U.S. bases in the country to reduce operation costs.

All SAX events are subsidized. Airmen pay $5 per trip, though the three days in Tokyo and Mount Fuji climb, done with the Navy&#8217;s Single Sailor Liberty Program at Misawa, costs $50.

Visneski maintains an e-mail database of 400 names of people who have attended SAX meetings, gone on trips or been referred by friends. Some outings have proved so popular that a lottery is created for overnight trips or those costing SAX $100 or more per person.

The catalyst: The first bungee-jumping trip to Sendai in May. By 10 o&#8217;clock the morning of sign-ups, the line snaked from the top of the community center stairs out the front door, Visneski said. The bus had 34 seats.

Visneski, a wing safety representative and several volunteers tested it to ensure it was reputable. They&#8217;re now investigating skydiving, but Visneski said that&#8217;s far from being approved.

Mendoza said SAX has allowed him to get out and experience Japan as well as make new friends.

Misawa&#8217;s Single Airman Xtreme program plans numerous trips on Misawa Air Base and close to home &#8212; and occasionally as far away as Tokyo. This month alone, 10 events are on the calendar, including:

A Star Trek movie anniversary party Sept. 9.The Tokyo Auto Show in October.Three days in Tokyo over New Year&#8217;s Eve weekend.Call DSN 226-4128 or stop by the Mokuteki Community Center, Building 626, for more information about SAX, which meets from 6:30 to 7:30 p.m. the first Wednesday of the month in the community center.