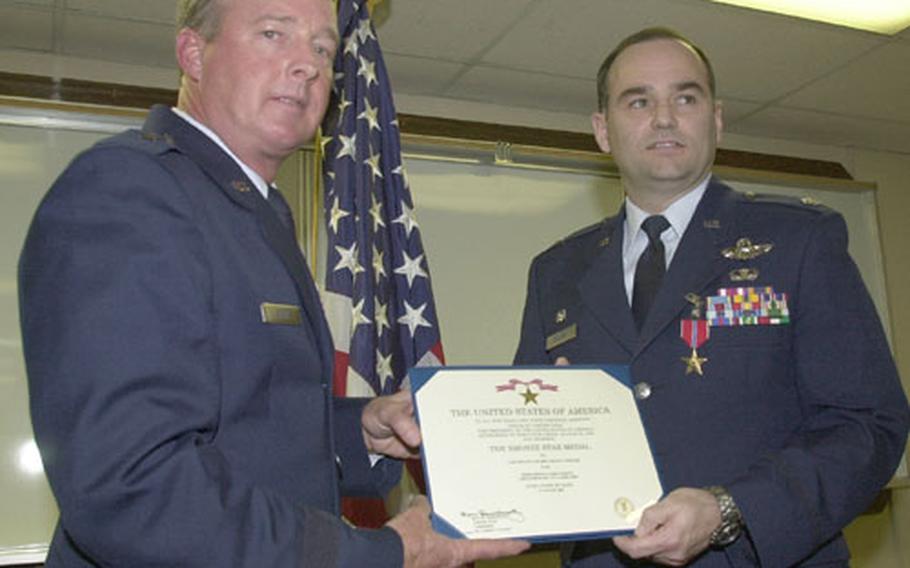 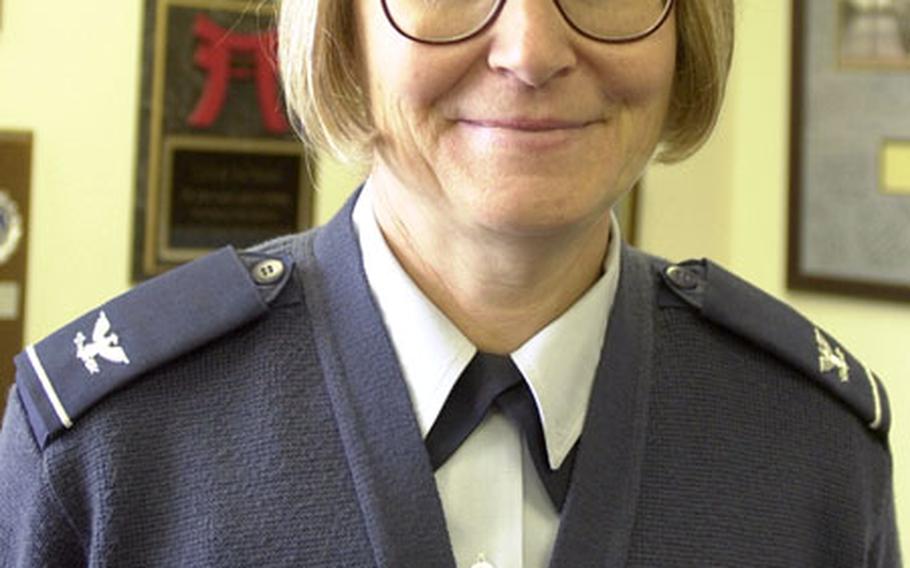 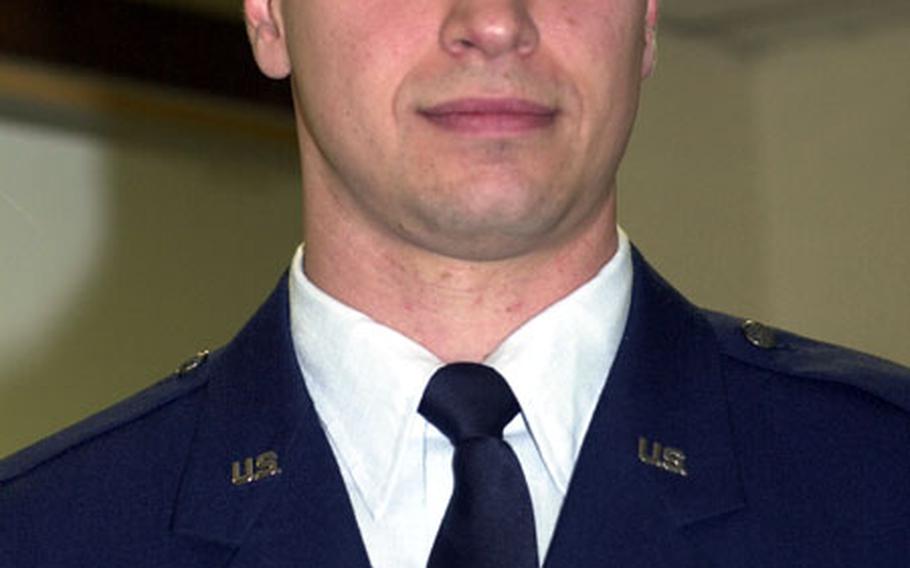 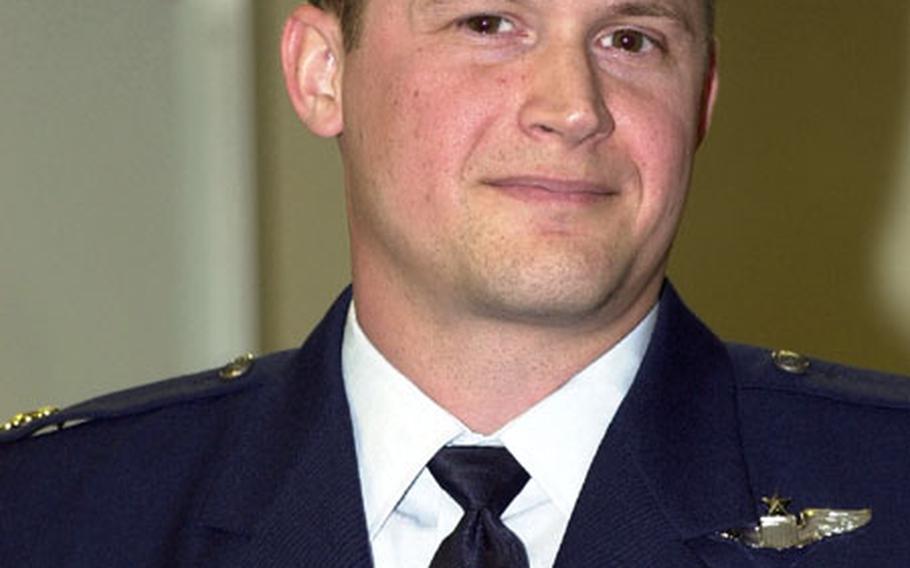 MISAWA AIR BASE, Japan &#8212; Her son sits nearby, home safe from a war long since declared over, but Bernice Long still wells up with tears.

It was an emotional evening Thursday for Long and the families of three F-16 pilots from Misawa&#8217;s 14th Fighter Squadron who were recognized for their achievements in Operation Iraqi Freedom.

Attending the ceremony was Col. Joy Shasteen, the 35th Mission Support Group commander, who also recently received the Bronze Star for &#8220;leading the single greatest bed-down in Central Air Forces for Operation Iraqi Freedom,&#8221; according to her medal citation.

Brig. Gen. Dana Atkins, the 35th Fighter Wing and Misawa base commander, presented the medals Thursday, calling each of the recipients heroes and thanking them for putting their lives on the line. So far, the 14th Fighter Squadron has received two Bronze Star Medals and eight Distinguished Flying Crosses for service in Operation Iraqi Freedom.

Tittel earned his cross for a March 28 mission flown near Baghdad.

After flying in support of Navy F/A-18 Hornets that were attacking targets southeast of Baghdad, he continued orbiting south of the Iraq fighter base Al Taqqadum to monitor a dense concentration of enemy surface-to-air missile batteries, according to his medal citation. Without warning, three surface-to-air missiles were fired in his direction. After requesting and receiving permission, he bombed and destroyed the missile battery.

Numerous family members attended Thursday&#8217;s ceremony, but none traveled as far as Long, who came from Atlanta to watch her son receive his first Distinguished Flying Cross medal.

An 11-year Air Force veteran, Lyons, 33, set his sights on fighter pilot wings when he was 6, after his dad took him to an air show. He never expected to wear the Distinguished Flying Cross, a medal awarded for heroism in aerial flight.

On March 26, Lyons was tasked with destroying two surface-to-surface ballistic missile systems, located north of Baghdad and capable of carrying weapons of mass destruction, according to his medal citation. Since the targets were in a residential area, Lyons was instructed to start the run south of Baghdad to reduce risk of collateral damage.

The flying route put him &#8220;within lethal range of over 40 surface-to-air missile systems and countless antiaircraft artillery batteries,&#8221; his medal citation reads.

&#8220;We had seen the Triple A before,&#8221; the pilot said, referring to anti-aircraft artillery from the ground, &#8220;but never as bad as we had seen that day. We had several explosions within about 1,000 feet of the airplane.

When not flying combat missions, Fowler, 42, was director of operations for the 14th Expeditionary Fighter Squadron at Prince Sultan Air Base, Saudi Arabia, from Dec. 2, 2002, to April 15, 2003. He oversaw the generation of combat sorties, designating pilots for missions based on their skills and leadership ability.

The squadron &#8220;flew every possible suppression and attack mission in support of operations on the ground in Iraq,&#8221; reads his medal citation. &#8220;In all cases, his pilots performed with the utmost flight discipline and left with a perfect record of no collateral damage and no fratricide.&#8221;

The Bronze Star Medal recognizes heroic acts &#8212; not in aerial flight &#8212; while engaged in an action or military operation against an enemy of the United States.

For Col. Joy Shasteen, 52, the medal is her proudest achievement in a career spanning 27 years.

During her seven-month deployment, Shasteen was commander of the 379th Expeditionary Mission Support Group at Al Udeid Air Base, Qatar. She and her team of seven squadrons built up the base to support more than 6,500 people, from an initial 1,700. Tents, latrines and dining halls were constructed, as was a gymnasium, library, a telephone communications system, and weapons and fuel storage cells.

Reads Shasteen&#8217;s citation: &#8220;Her team created an environment that was essential to achieving an extremely low disciplinary rate and significantly enhanced the wing&#8217;s ability to launch and recover aircraft.&#8221;

Shasteen called the experience the &#8220;highlight of my military career &#8212; the camaraderie, the achievement, the fact that we enabled the warrior to take the fight forward.&#8221;