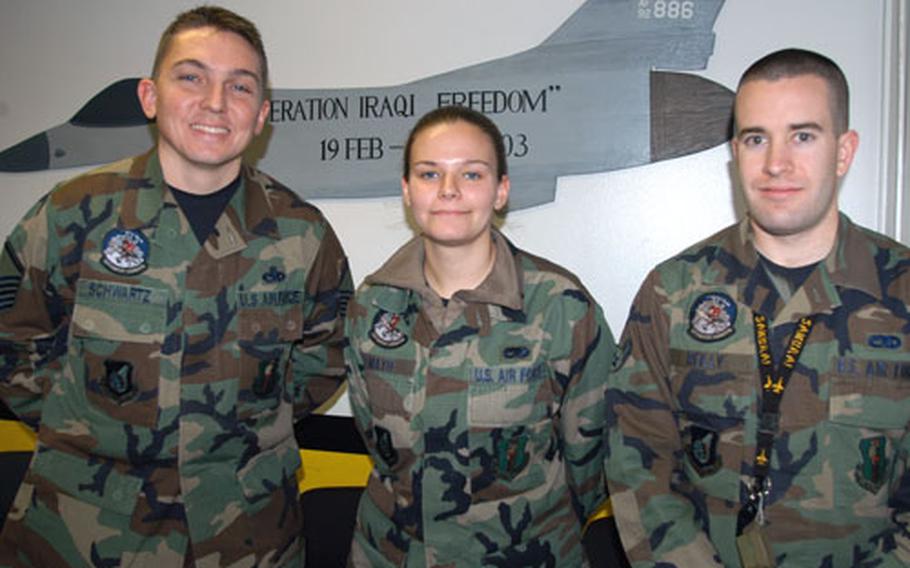 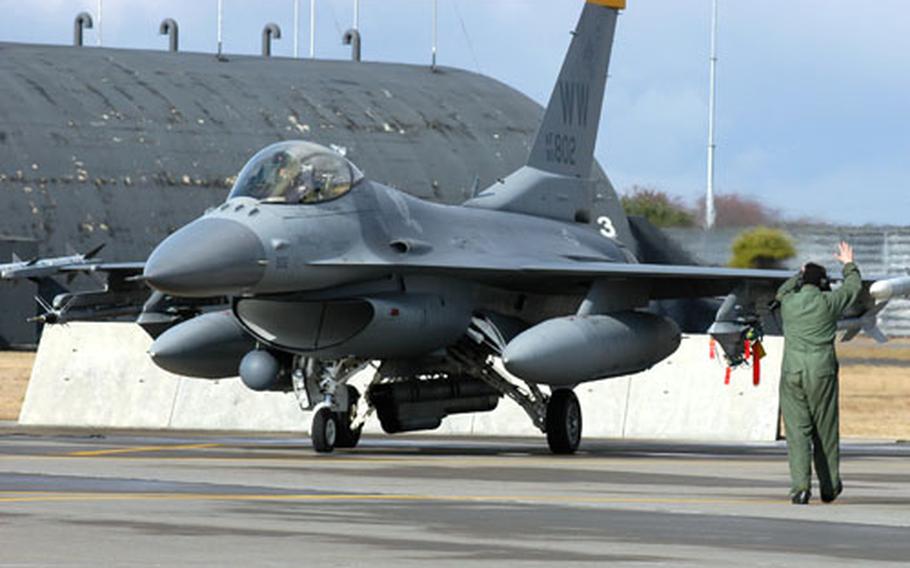 An F-16CJ with the 14th Fighter Squadron at Misawa Air Base, Japan, gets ready for a training mission Friday morning. (Jennifer H. Svan / S&S) 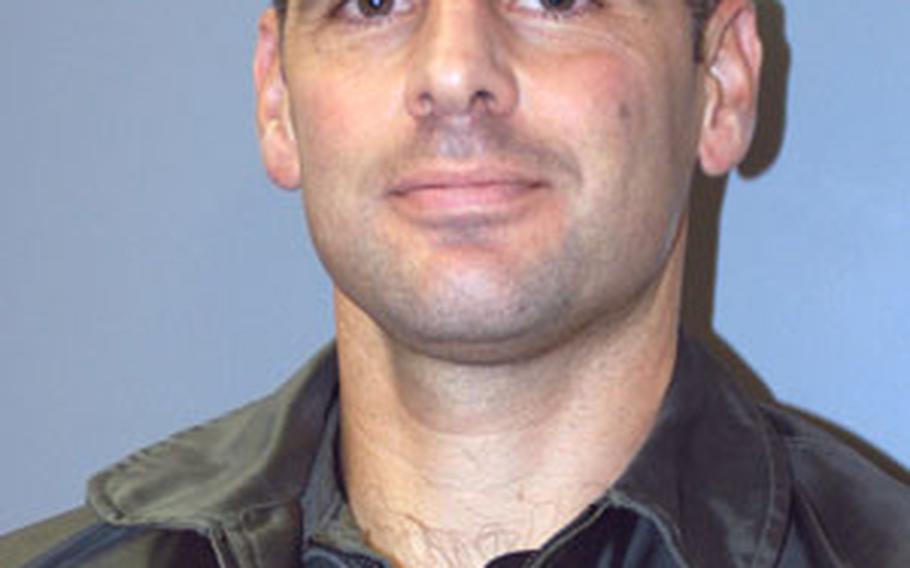 MISAWA AIR BASE, Japan &#8212; Some are excited, ready to jump in the fight and be a part of history. Others admit to a case of nerves, not very eager to work and sleep in a land where mortars rain from the sky.

More than 200 airmen from this northern Japan base will deploy to Iraq with the 14th Fighter Squadron, most likely in late December or early January.

Along with most of its fighter pilots and F-16 jets, the squadron is taking intelligence, administrative and life-support personnel, in addition to maintainers from the 35th Aircraft Maintenance Squadron.

The unit will be based at an undisclosed location in Iraq to support Operation Iraqi Freedom and Operation Enduring Freedom, according to base officials.

The deployment, part of the Air Force&#8217;s next four-month Aerospace Expeditionary Force rotation, will mark the squadron&#8217;s first return to Iraqi skies since spring 2003.

&#8220;The 14th Fighter Squadron had the opportunity to be the very first non-stealth aircraft over Baghdad and fired the first high-speed anti-radiation missile in that conflict,&#8221; said squadron commander Lt. Col. Chuck Toplikar.

This time around, the squadron expects to engage in mostly close-air support and non-traditional intelligence, surveillance and reconnaissance missions aiding coalition troops on the ground.

With advanced targeting pods that provide the cockpit with bionic-like vision in day and night, Misawa pilots could be tasked, for instance, to be the far-reaching eyes and defense of a ground convoy.

The wars in Iraq and Afghanistan are the first conflicts in which F-16CJs have been tasked with these so-called non-traditional intelligence, surveillance and reconnaissance missions, Toplikar said.

The primary mission of the &#8220;Wild Weasels&#8221; is suppressing enemy air defenses, such as surface-to-air missile sites and anti-aircraft artillery. But since Iraq&#8217;s enemy air defenses were eliminated during the U.S.-led invasion in 2003, the F-16s have transitioned to &#8220;a more conventional munitions air-to-surface attack capability or just bomb dropping,&#8221; Toplikar said.

Capt. Brandon McBrayer, 29, a fighter pilot from Hamilton, Mo., said he&#8217;s looking forward to his first deployment to the war.

Tech. Sgt. Eli Huertas, 33, of Lowell, Mass., the noncommissioned officer in charge of life support, is ready to live a small piece of history &#8212; again. He was with the 14th when it operated from Prince Sultan Air Base, Saudi Arabia, in late 2002 and early 2003.

Like the pilots, the maintainers said they expect a high operations tempo. One challenge will be keeping sand and grit out of electronic components and air-conditioning systems, said Master Sgt. John Schwartz, a 35th Aircraft Maintenance Squadron section chief.

He&#8217;s also doing his part to get his maintainers ready for what, for many, will be their first deployment to Iraq, such as Airman 1st Class Jennifer Mayo, 21, an avionics specialist from Tampa Bay, Fla.