Misawa airmen in Iraq, but spouses have forum 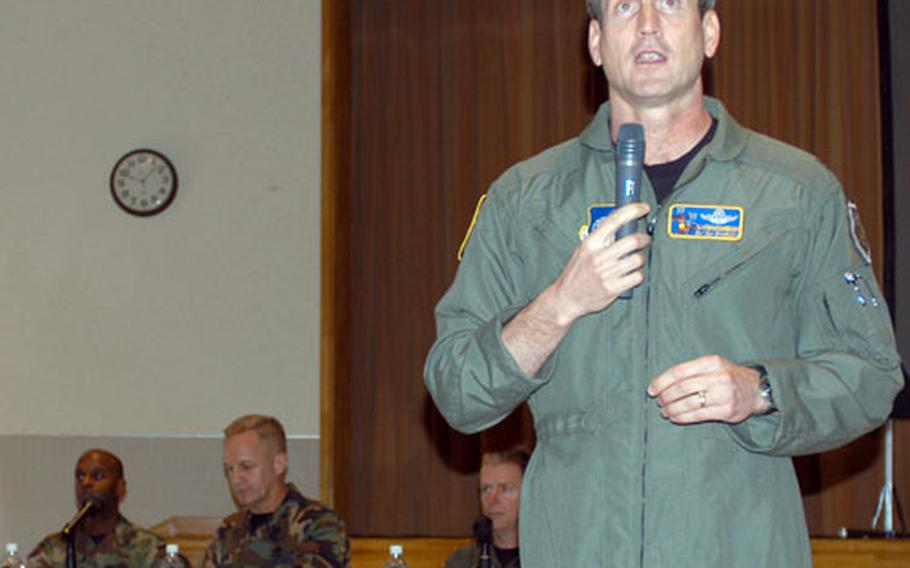 MISAWA AIR BASE, Japan &#8212; It was the first official litmus test on how Misawa spouses are doing since the base deployed more than 450 airmen to Iraq a month ago.

Though there were a fair number of empty chairs in the ballroom &#8212; more people were expected at a second town hall meeting Tuesday night &#8212; those in attendance were vocal and came ready with questions.

For some, matters that seemed small now loom large, such as road taxes, due by car owners every spring in Japan. (Road taxes pay for the upkeep of roads in Japan and are mandatory for both foreigners and Japanese.)

One of the meeting&#8217;s first questions &#8212; submitted anonymously on a slip of paper &#8212; was whether there was any assistance or guidance for paying road taxes in April.

No one wanted to touch that hot potato. But, the good news, delivered later in the meeting, after the legal office was consulted, was that no power of attorney was needed to pay road taxes, just Japanese yen and the proper paperwork.

Most questions were submitted in writing, on a range of topics. Someone asked how long the pediatrics clinic will have just one doctor, noting, &#8220;It&#8217;s incredibly hard to make appointments.&#8221; Col. Mary Armour, 35th Medical Group commander, said the hospital was not able to obtain manning assistance to fill the temporary shortfall, but should have two providers again by the second week in March. A family-practice physician, meantime, is assisting with the pediatrics backlog.

Base officials, in response to questions, said they were trying to iron out some glitches with the 35th Services Squadron&#8217;s AEF Passport, a program that provides free services and discounts to deployed servicemembers&#8217; families. O&#8217;Shaughnessy said that in the near future, instead of giving families a monthly free trip through Misawa ITT or Outdoor Recreation, the passport would offer a discount for trips across the board. The free trips had been filled before everyone received their passport, and the base doesn&#8217;t have enough buses to accommodate everyone, officials said.

At least one spouse was thinking about Valentine&#8217;s Day. The question was whether Misawa&#8217;s airmen, deployed to Balad Air Base, had access to a flower shop. Base officials said airmen could order flowers online, prompting this response from Chief Master Sgt. Jack Adams, acting 35th Fighter Wing command chief: &#8220;I&#8217;ll send an e-mail [to airmen downrange] that they&#8217;re going to be expected to send some tomorrow.&#8221;