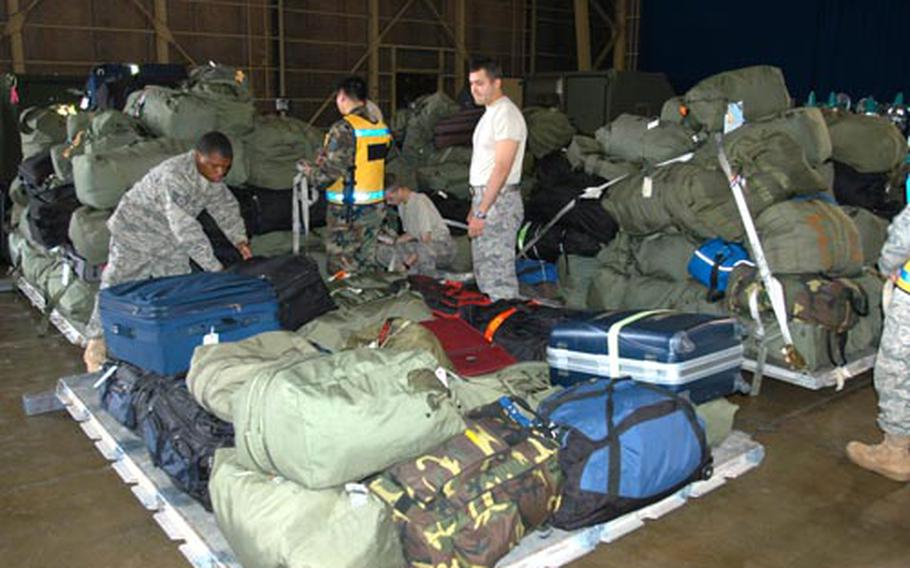 Airmen at Misawa Air Base, Japan, help pile luggage on cargo pallets Sunday morning. Airmen and their bags deployed to Iraq Sunday in support of the 14th Fighter Squadron. More than 300 airmen are part of the deployment, scheduled to last four to five months. (Jennifer H. Svan / S&S)

Airmen at Misawa Air Base, Japan, help pile luggage on cargo pallets Sunday morning. Airmen and their bags deployed to Iraq Sunday in support of the 14th Fighter Squadron. More than 300 airmen are part of the deployment, scheduled to last four to five months. (Jennifer H. Svan / S&S) 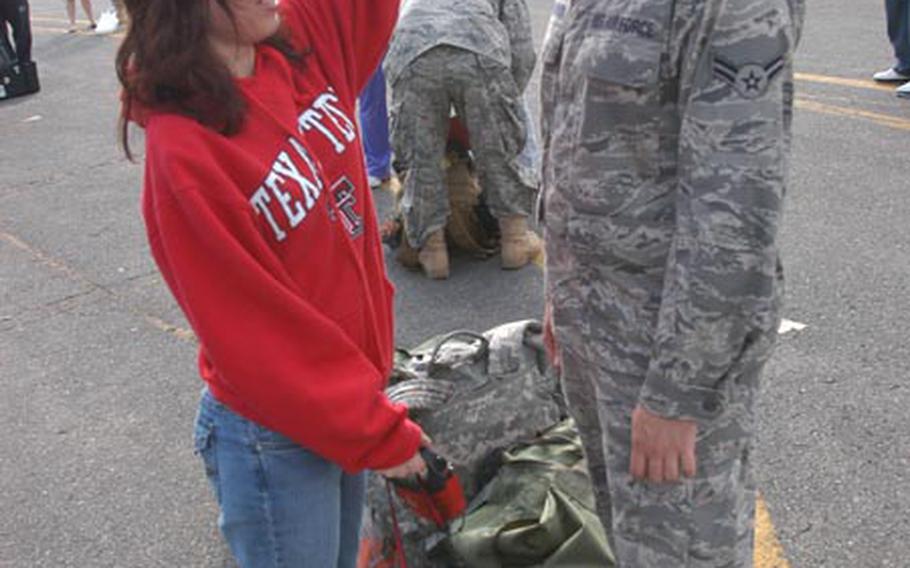 Dora Upchurch adjusts the cap of her husband, Airman 1st Class Jonathan Upchurch, Sunday morning at Misawa Air Base, Japan. Dora and the couple&#39;s dog "Jake" soon after bid farewell to Jonathan, who was scheduled to deploy to Iraq with a large group of other airmen Sunday with the 14th Fighter Squadron. (Jennifer H. Svan / S&S) 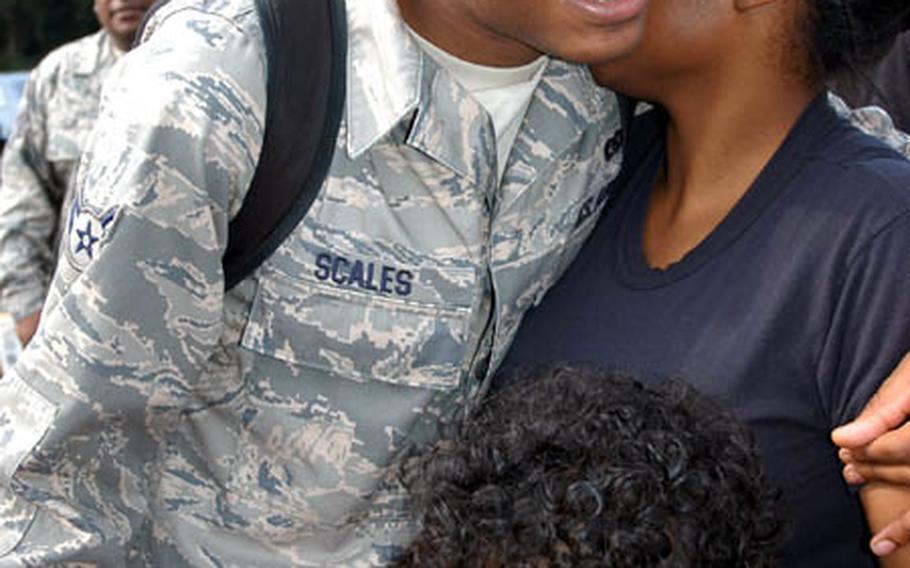 Airman 1st Class LaBrandon Scales, 24, of the 35th Aircraft Maintenance Squadron, hugs his wife Shaquetha Scales, and children, Shavondre, 8, center, and Khalie, 4. Scales was among a large group of airmen at Misawa Air Base, Japan, who deployed Sunday to Iraq in support of the 14th Fighter Squadron. (Jennifer H. Svan / S&S) 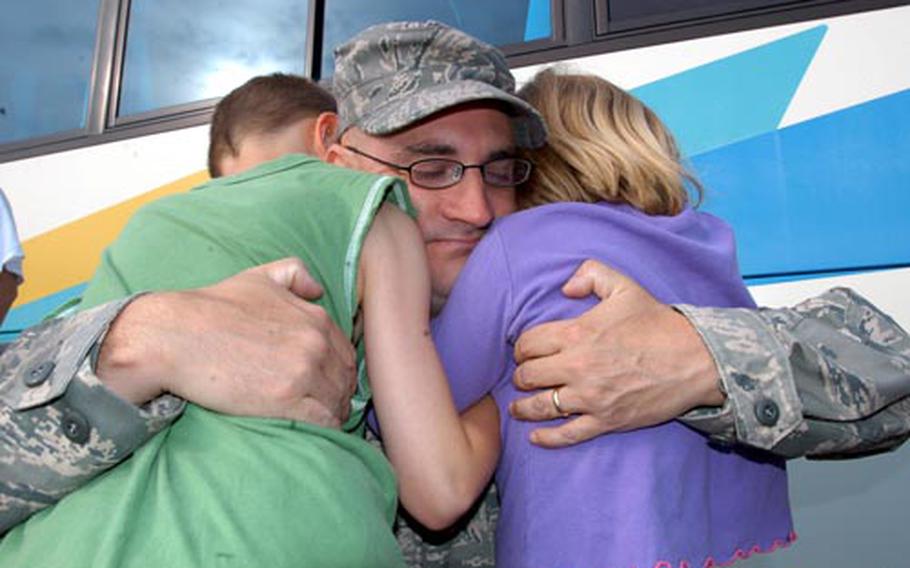 Families gathered in a parking lot near the north side of base Sunday morning to see their loved ones off to war.

There were kisses for spouses, bear hugs for kids, pats on the head for family dogs and a few tears for all, before airmen shuffled with their Army green duffle bags to a bus that marked the first leg of a journey. Final destination: Iraq.

First, the bus dropped them at a hangar. Airmen were to later board a plane and fly out of northern Japan for a deployment expected to last four to five months.

More than 300 airmen are deploying to an undisclosed base with the 14th Fighter Squadron, which is tasked with providing close-air support to troops on the ground. The main body left Sunday, according to base officials.

Though the squadron last deployed to Iraq about 16 months ago, many airmen, new to Misawa since then, are facing their first assignment there with a mix of anticipation and uneasy jitters.

"You never know what to expect," he said about a week before deploying. "It&#8217;s a war zone. You just want to get there, get started."

With his wife, Dora, and dog Jake by his side Sunday morning, Airman 1st Class Jonathan Upchurch, 23, of the 35th Aircraft Maintenance Squadron, allowed that he was excited for his maiden deployment.

For others, like Staff Sgt. Eric Parker, 33, this seemed like a routine deployment. Parker, who works for the 14th Aircraft Maintenance Unit, has deployed five times, including once previously to a different location in Iraq.

But with the presidential elections in the United States around the corner and other concerns, this deployment is more worrisome for Parker&#8217;s wife, Kathy.

Senior Airman Martin Vlacich, 24, is married but he and his wife didn&#8217;t have to prepare for a long separation. Airman 1st Class Megan Vlacich is also deploying. Megan and Martin met at Misawa and are assigned to the 35th Maintenance Squadron.

Though tagged for the same deployment, the couple expects life downrange to feel nothing like a second honeymoon. Unlike the Army, the Air Force doesn&#8217;t allow married servicemembers to share living quarters.

Because they work for different shops, they won&#8217;t see each other on the job much, either. But the Vlacichs hope to be able to spend some of their down time together, a possibility since they&#8217;re both scheduled for the same 12-hour shift.

If anything, "we&#8217;ll see each other in passing, maybe," Vlacich said recently.