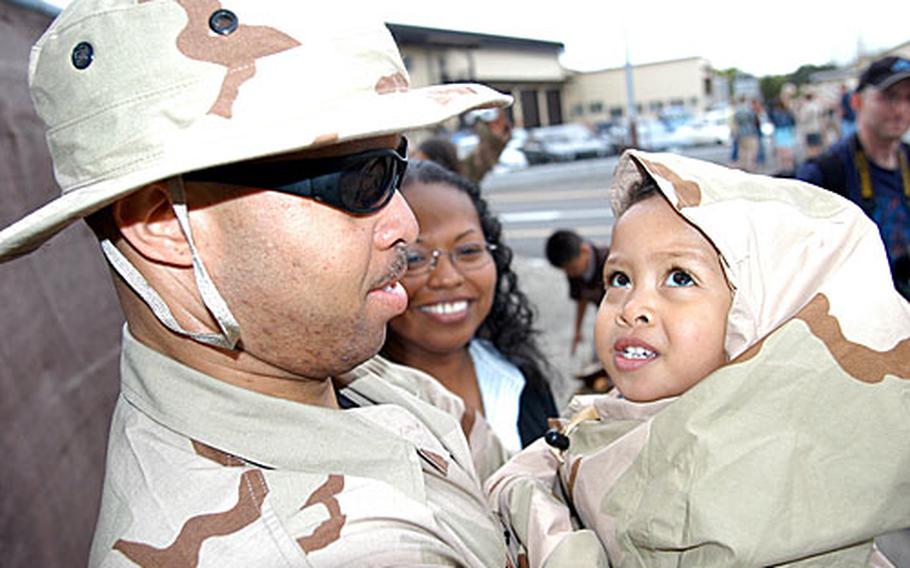 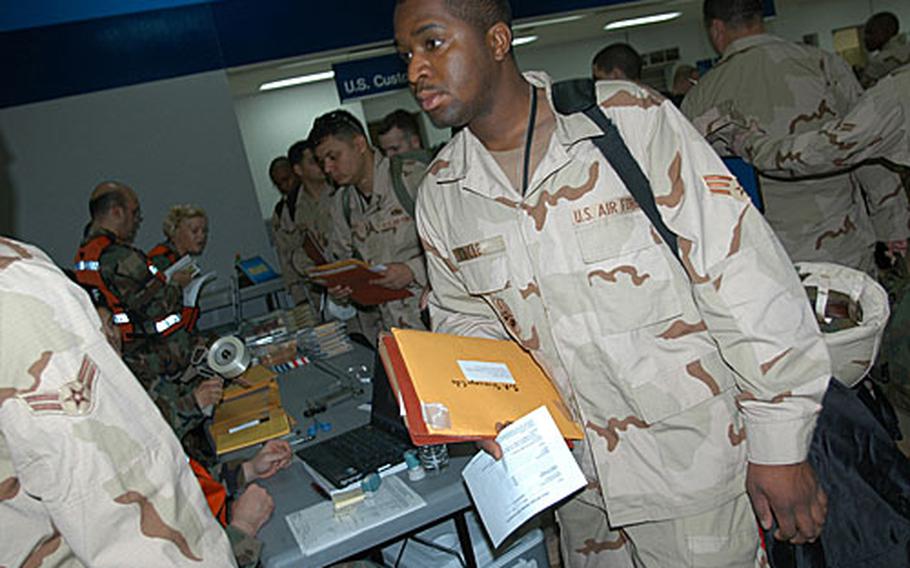 MISAWA AIR BASE, Japan &#8212; Catrina Sheperd&#8217;s thoughts already turned to the homecoming this fall even before she bid farewell to Iraq-bound Tech. Sgt. Duane Sheperd of the 13th Aircraft Maintenance Unit Saturday afternoon.

It was an exercise in positive thinking to will her husband home safely and numb the emotions of saying good-bye for four months.

Still, the family said it&#8217;s prepared for anything.

Sheperd was among more than 260 Misawa airmen who were to leave Saturday for the Middle East, with the majority going to Iraq in support of the 13th Fighter Squadron. Misawa is deploying about 700 airmen for the next Aerospace Expeditionary Force rotation, lasting from roughly June to September; Saturday&#8217;s wave was the biggest yet to go forward for the upcoming AEF.

Pilots, maintainers and other support personnel will relieve the 14th Fighter Squadron at Balad Air Base north of Baghdad. The 14th, with help from other Misawa units, has been providing close-air support to coalition ground troops since January. Now it&#8217;s the 13th&#8217;s turn to say their good-bye&#8217;s.

Sheperd, 36, gave his kids teddy bears in military uniforms to keep by their bedsides while he&#8217;s away; they returned the favor with a school photo that Sheperd&#8217;s supposed to look at every day, his children said.

&#8220;I just tell them cherish what they have now because you never know what happens in a war,&#8221; he said while standing outside the passenger terminal among a sea of desert camouflage.

A number of airmen said Saturday they were ready for the challenge and eager to get to Iraq so Misawa&#8217;s downrange airmen could come home.

Heading into his maiden deployment, Whitney said he has no qualms about going to Iraq.

To the suprise of one onlooker, Senior Airman Simanga Cele, 22, an F-16 avionics specialist with 35th Aircraft Maintenance Squadron said he was excited to go to Iraq.

Cele packed light, figuring he&#8217;d need only some books and his iPod to stay entertained off-duty while deployed.

About 700 airmen from Misawa Air Base, Japan, are deploying throughout the month in support of the Air Force&#8217;s next Aerospace Expeditionary Force rotation. Here&#8217;s a look at what three Misawa airmen will be doing downrange:

Rich is deploying somewhere in Southwest Asia where he&#8217;ll work as a quality assurance fuel laboratory technician. His job will be to oversee and run tests on aviation fuel, ensuring it meets Air Force specifications. &#8220;We make sure it&#8217;s clean, dry jet fuel, with no contaminants,&#8221; he said. He compares the tests to running coffee through a filter to weed out soil, small rocks and other contaminants, while also making sure the petrol contains the right mix of additives. &#8220;Too much water will cause the engine to burn out and crash,&#8221; he said. For this deployment, he&#8217;ll leave behind a wife and two kids, ages 8 and 6.

A dining facility shift leader, Graham is deploying to an unnamed base in Iraq to help with lodging, fitness or recreation programs; airmen in her career field are trained in all three areas. She might set people up in dormitories or tents or help airmen reach their fitness goals in a desert environment, depending on where she&#8217;s needed most. Staying fit downrange is especially important since &#8220;you probably eat better on deployment than you do at home,&#8221; she said. The food is good, because it has to be, she said. &#8220;They want to give you what you need to do your job.&#8221; Graham wants to make sure her younger airmen deploying with her are prepared. &#8220;If you get nervous, don&#8217;t be,&#8221; she tells them. &#8220;You&#8217;re going to go with the best Air Force in the world.&#8221;