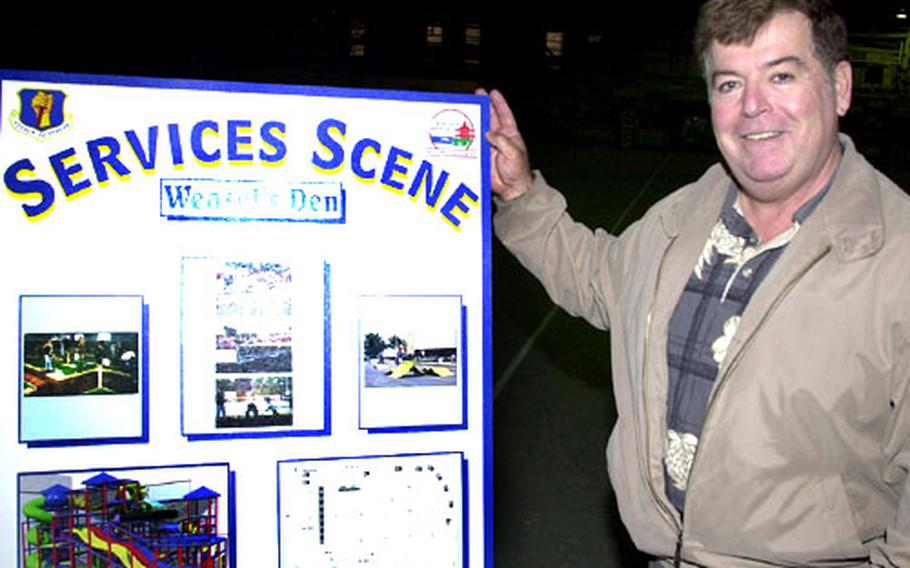 MISAWA AIR BASE, Japan &#8212; If you&#8217;re not an outdoor winter sports enthusiast, it&#8217;s easy to go stir crazy at this northern Japan base when the snow settles and the temperature drops.

Base officials hope to change that.

Hangar 973, once used for storage, is being transformed into a 65,000-square-foot indoor play area for children, adults and families. The Weasel&#8217;s Den should open by the end of October, said Bob Smith, 35th Services Squadron community support flight chief.

Brig. Gen. Dana Atkins said he threw his support behind the $1.7 million project soon after he took command of the base and 35th Fighter Wing.

Master Sgt. L.D. Moore, 35th Mission Support Squadron, said few families ski at Misawa. &#8220;A lot of people here are just stuck on the installation&#8221; in the winter, he said.

Moore&#8217;s winter hobby is working out in the gym, but he said he&#8217;d take his three daughters to the indoor recreation center in a heartbeat.

Adolescents in particular seem to have fewer winter recreational outlets, he said.

Plans now call for the Weasel&#8217;s Den to be open year-round, seven days a week, with limited hours on holidays. Outdoor Recreation will move its offices and equipment rentals into the building and its employees will staff the center, Smith said. There will be no admission charge, but it&#8217;s anticipated patrons will have to pay a user fee for miniature golf and Go Kart rental, officials said. Hot food won&#8217;t be sold, but vending machines will be installed.

Construction is expected to start on the World War II-era hangar in April; the building should be turned over to Outdoor Recreation Services in July, said Capt. Chuck Davis, 35th Civil Engineer Squadron chief of engineering.

Before it begins setting up the center&#8217;s interior, the bathrooms need to be renovated, more energy-efficient lights installed and entrance and exit ways built to meet Americans with Disabilities Act standards, Davis said.

The Army Corps of Engineers is designing the facility and will hire local contractors for the construction, Davis said.

The wing already has allotted funding for renovations; money from Pacific Air Forces for quality of life projects has paid for much of the equipment, such as the inflatable devices and skateboard park ramps, which already sit in boxes in the hangar.

The Weasel&#8217;s Den indoor recreation center will include:

&#182; Inline skate park: Goals and netting will be set up for hockey games; hours will be designated for family skating, also.

&#182; Rock climbing: A 10-foot climbing wall will be set at a 10-degree angle with a padded zone to cushion falls.&#182; Fun Zone:[/BOLDFACE] Large inflatable devices will be switched out, including a carnival set-up, a giant game of Twister, a haunted house, a bungee run, boxing with big, soft gloves and wrestling with inflatable sumo suits.

&#182; Video games: Three widescreen TVs, tables, chairs and vending machines will be on a mezzanine, where patrons can check out and play Nintendo or Xbox games and parents can watch younger children in the nearby kids&#8217; play areas.