Buy Photo
Richard Clark, 35th Fighter Wing historian, explains Thursday how a couple of airmen accidentally discovered what is believed to be a World War II-era, Japanese military bunker in the woods on Misawa Air Base, Japan. (T.D. Flack/Stars and Stripes)

Buy Photo
Richard Clark, 35th Fighter Wing historian, explains Thursday how a couple of airmen accidentally discovered what is believed to be a World War II-era, Japanese military bunker in the woods on Misawa Air Base, Japan. (T.D. Flack/Stars and Stripes) 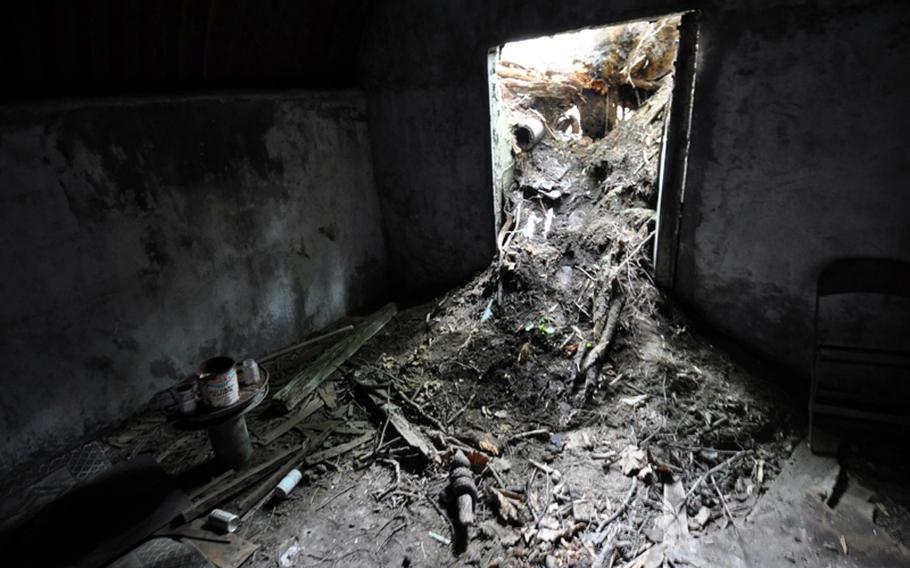 Buy Photo
Dirt and debris have spilled into the doorway of what is believed to be a World War II-era, Japanese military bunker that was recently discovered on Misawa Air Base, Japan. The U.S. military is working with Japanese officials to renovate and preserve the site. (T.D. Flack/Stars and Stripes) 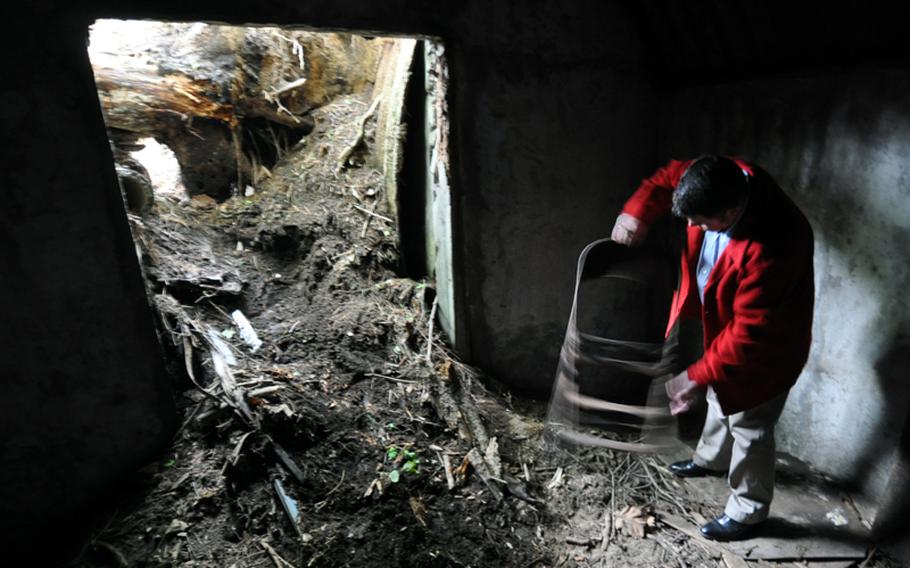 Richard Clark, 35th Fighter Wing historian, picks up an old folding chair that was abandoned in what is believed to be a World War II-era, Japanese military bunker in the woods on Misawa Air Base, Japan. Old beer cans from the 1970s show that base troops had discovered the bunker years ago. (T.D. Flack)

MISAWA AIR BASE, Japan &mdash; A possible World War II-era bunker that survived the intense U.S. bombing of the area more than 60 years ago might be turned into a museum, if base officials have their way.

Richard Clark, 35th Fighter Wing historian, said he was going to look at a used car and the owner mentioned that two of his troops had stumbled across the bunker in a wooded area on Misawa, home to the Japanese Imperial Navy during the war. Clark immediately went to the site, which was buried in the woods.

&ldquo;I felt like Indiana Jones climbing down into the pit,&rdquo; he joked. He said he was amazed at the condition of the 18-foot-long, 13-foot-wide cement bunker, which had a 10-foot-high, arched metal roof.

It was quickly obvious that it had been &ldquo;discovered&rdquo; at some point years ago. Old Budweiser beer cans litter the bunker, a lantern dangles from the ceiling and a musty carpet is spread across the floor. Clark said the beer cans appear to date to the 1970s and troops might have once used the bunker &ldquo;as a hang-out place.&rdquo;

Clark announced the find during a meeting of base leaders, and the 35th Civil Engineer Squadron&rsquo;s Environmental Management Division became involved. They invited Masayoshi Nagao &minus; the Misawa City archaeologist and senior assistant to the city&rsquo;s board of education &ndash; to inspect the bunker with Clark in mid-May.

&ldquo;When I first saw it, I could not believe that it was of the Japanese Imperial Navy because the condition was too good to believe it,&rdquo; Nagao said during a phone interview.

But upon closer inspection his doubt changed to excitement, he said.

&ldquo;It was almost a miracle,&rdquo; he said. &ldquo;This is a very important and rare war legacy for Misawa City.&rdquo;

Using old Japanese maps of the base, Clark was able to pinpoint some sort of structures in the same location as the bunker. Given the location of the old flight line, he speculates that the bunker could have been a &ldquo;ready room&rdquo; that housed Japanese pilots waiting to defend the base.

Clark hopes the structure can be turned into a joint Japanese and American museum, with exhibits in both languages &ndash; a very visible way to teach the history of the base.

&ldquo;It&rsquo;s huge to be able to touch the walls,&rdquo; he said.

Takeshi Ukon, manager of the 35th Civil Engineer Squadron&rsquo;s Cultural and Natural Program, said the first step is to secure the site and coordinate with local city and university officials &ldquo;to determine the best approach to restore/preserve this unique facility.&rdquo;

Base officials don&rsquo;t want to release the location because they don&rsquo;t want people to visit the bunker until the area is cleaned and secured. They also discourage anyone from searching for other wartime artifacts or bunkers on the base.

&ldquo;It&rsquo;s not a good idea to go out there digging in the ground,&rdquo; Clark said, warning of the potential for discovering unexploded munitions.

Clark said that, as a historian, he really appreciates the rediscovery of this slice of the past.