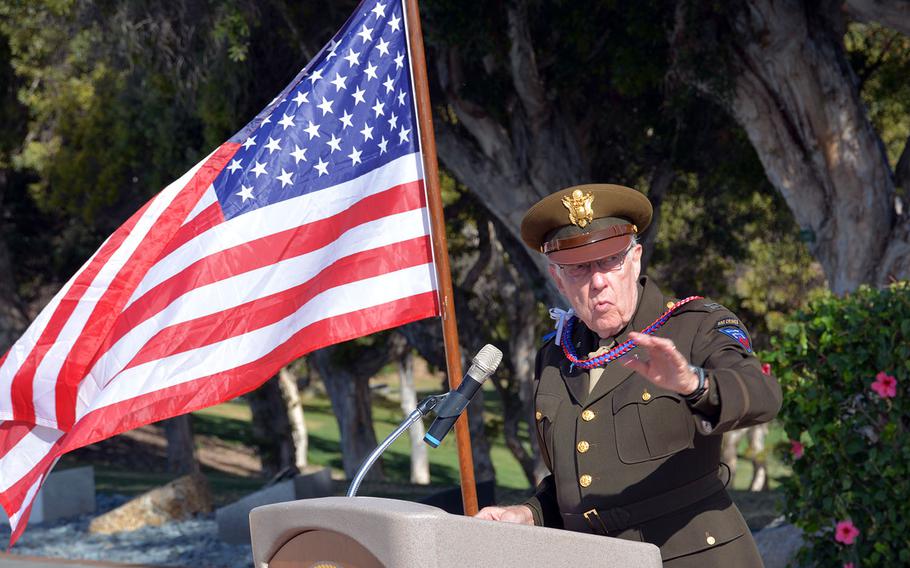 Buy Photo
Retired Army chaplain Richard Stenbakken, clad in the type of uniform worn by chaplains during World War II, speaks at a ceremony dedicating a monument to chaplains at the Punchbowl cemetery in Honolulu, Wednesday, Dec. 13, 2017. (Wyatt Olson/Stars and Stripes)

Buy Photo
Retired Army chaplain Richard Stenbakken, clad in the type of uniform worn by chaplains during World War II, speaks at a ceremony dedicating a monument to chaplains at the Punchbowl cemetery in Honolulu, Wednesday, Dec. 13, 2017. (Wyatt Olson/Stars and Stripes) 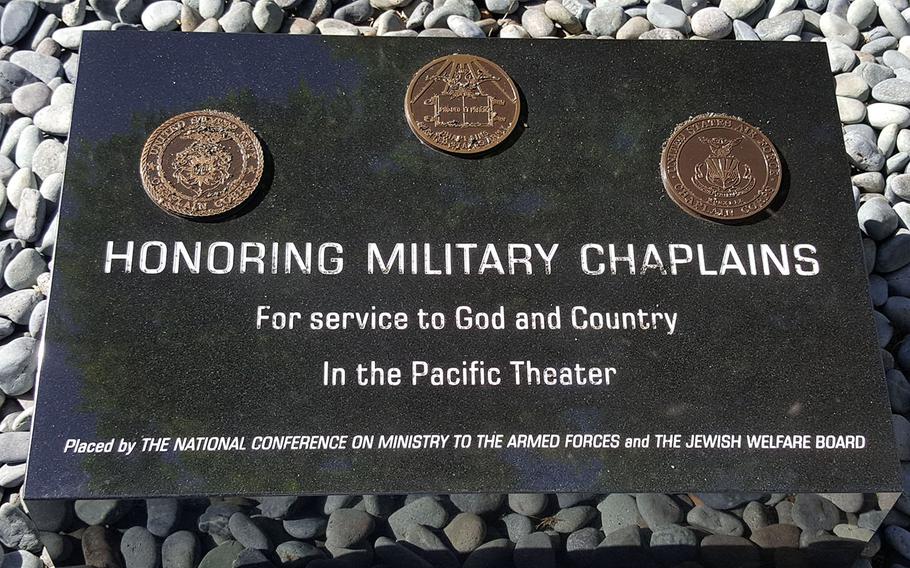 Buy Photo
A monument commemorating the service of chaplains who served in the Pacific was dedicated at the National Memorial Cemetery of the Pacific in Honolulu, Wednesday, Dec. 13, 2017. (Wyatt Olson/Stars and Stripes) 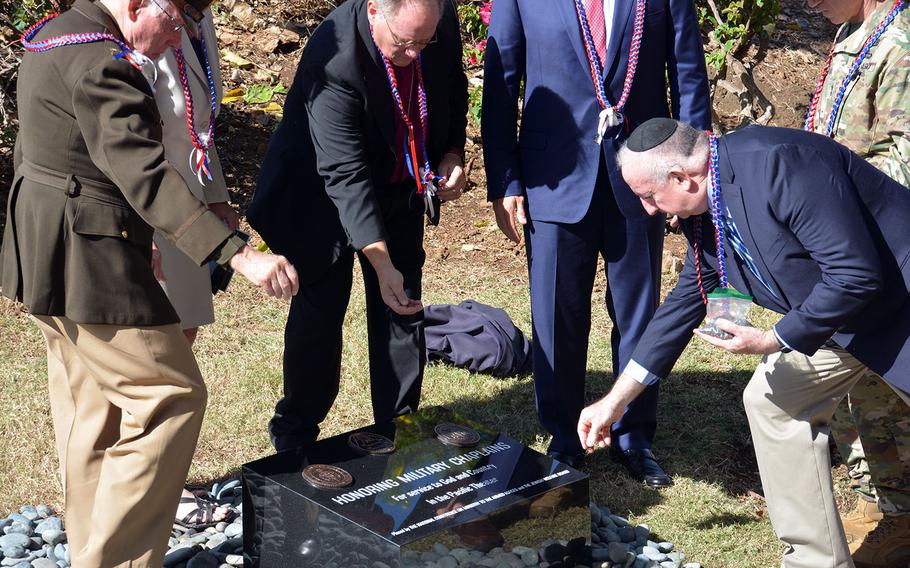 Buy Photo
Led by Rabbi Irving Elson, right, current and former military chaplains sprinkle soil from Iwo Jima on a monument for chaplains who served in the Pacific during a dedication ceremony, Wednesday, Dec. 13, 2017, at the National Memorial Cemetery of the Pacific, Honolulu. (Wyatt Olson/Stars and Stripes)

HONOLULU — It’s no surprise that Richard Stenbakken would describe Wednesday’s dedication of a 1,600-pound monument honoring chaplains at the Punchbowl cemetery as “a miracle.”

After all, Stenbakken spent 23 years as a chaplain in the Army, then took early retirement to work on recruiting and vetting chaplains for the armed services.

The claim of divine intervention, however, arises because he spent the past two years garnering support, maneuvering through red tape and producing an 88-page application, only to see the planned dedication ceremony at the National Memorial Cemetery of the Pacific practically derailed at the last minute by late shipping and forest fires.

“Believe me, getting that stone here as late as it got in, and getting it finished in time – every step along the way was a miracle,” he said. “I mean seriously a miracle.”

It was two years ago that Stenbakken was visiting the Punchbowl Cemetery, as it’s referred to locally, with friends. While strolling up a promenade called the Memorial Walkway, which is lined with stone-bronze monuments dedicated to a host of military units and organizations, he stopped and puzzled over why the chaplains who’d served in the Pacific did not yet have their own commemoration.

He set about to make that happen.

“I think it’s a reminder to people who walk up there that chaplains have been and are there to support the needs of military people and families,” Stenbakken said. “So it’s not only a look back, it’s a look at right now because chaplains are serving all over. It’s also a look to the future as chaplains continue to do that. It’s a memorial to the past, a touchstone for the present, and it’s a commitment for the future.”

The $3,000 monument was funded by the National Conference on Ministry in the Armed Forces and the Jewish Welfare Board.

During the dedication, Maj. Gen. Paul Hurley, chief of chaplains of the U.S. Army, said the monument would “tangibly mark what it is, and why it is, chaplains are here,” which he described as “our holy and sacred business of caring for these souls and their wellbeing.”

Many chaplains have died in pursuit of that mission.

According to the 1994 book “Battlefield Chaplains: Catholic Priests in World War II,” 100 chaplains in the Army and Marines were killed in action during World War II.

Last week, on the day of the 76th anniversary of the Japanese surprise attack on Pearl Harbor, Secretary of the Navy Richard Spencer awarded the Silver Star to Chaplain Lt. j.g. Aloysius Schmitt for sacrificing his life in helping his shipmates on the USS Oklahoma get off the doomed battleship.

During the same war, the famed “Four Chaplains” — Lt. George Fox, Lt. Alexander Goode, Lt. John Washington and Lt. Clark Poling — gave up their life jackets as the USS Dorchester sank in the North Atlantic in 1943. They perished so that four others might have a chance to survive.

“Anyone who has ever worn the cloth of our nation, that represented their faith tradition, has stood in the breach and made a difference and said to God, “I will hold your people in my hand.’ That’s why we’re here today,” said John Lea III, a retired Navy chaplain, during the ceremony.

Plans to ship it to Hawaii by boat had to be abandoned. Even though the cost of shipping by air would exceed the monument’s price tag, it was the only option. But first the stone had to be trucked 100 miles north to Los Angeles International Airport.

“But to get it from there to LAX, the passage was through where they were having forest fires,” he said. “Nobody wanted to ship it.”

He finally wrangled a trucker to do the job, and the stone arrived in Hawaii Saturday morning. Engravers at Honor Life Memorials in Kaneohe agreed to work through the weekend to ensure the monument would be ready for the dedication.

“When Dick says it was a miracle,” Lea said, “this stone was unengraved and sitting in San Diego on Friday, and here it is today – engraved, installed and now being dedicated.