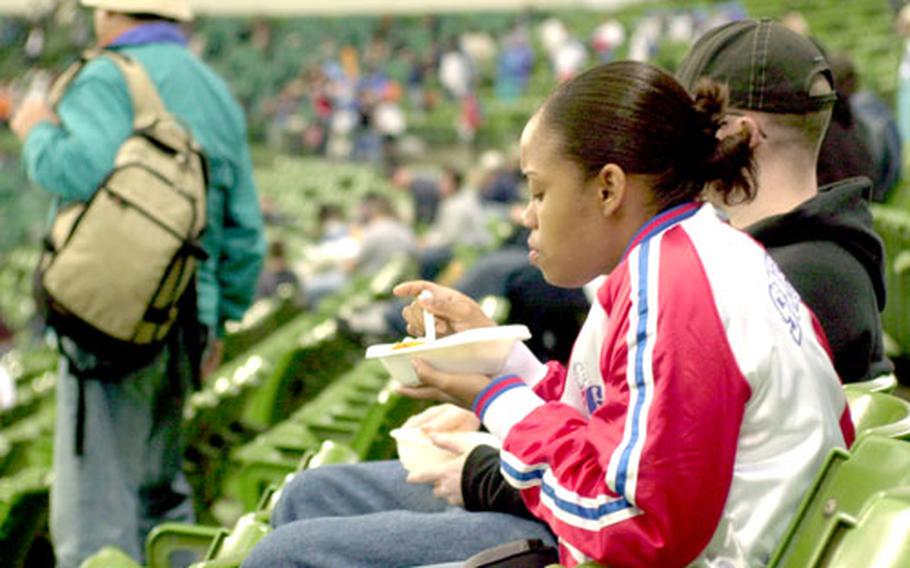 Senior Airman Tanisha Tyler enjoys the Japanese food at the Saibu Dome on Saturday while watching a Japanese baseball game with other military members and their families on Yokota Day. (Christopher B. Stoltz / S&S)

Senior Airman Tanisha Tyler enjoys the Japanese food at the Saibu Dome on Saturday while watching a Japanese baseball game with other military members and their families on Yokota Day. (Christopher B. Stoltz / S&S) 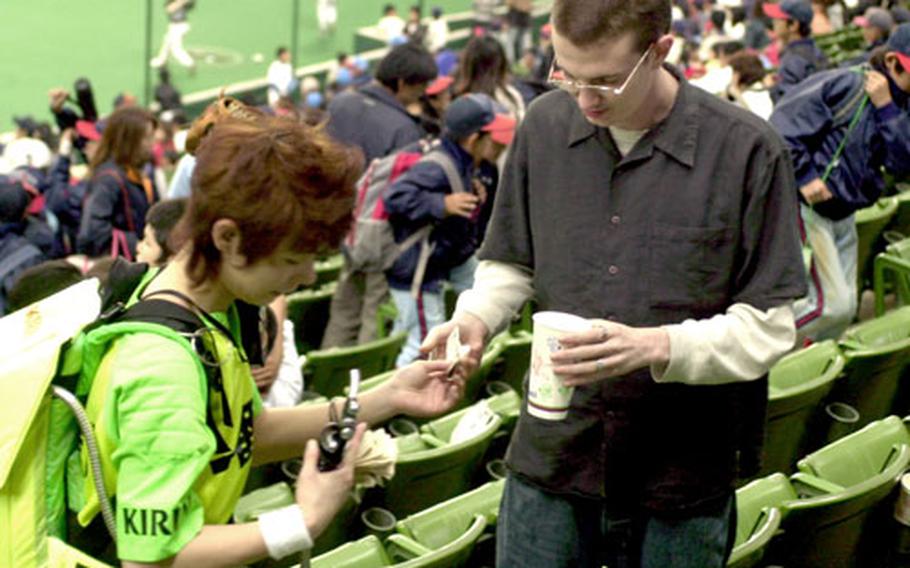 A Japanese baseball fan tries to get a closer look at the players at the Seibu Dome on Saturday. (Christopher B. Stoltz / S&S) The Seibu Dome, where servicemembers and their families enjoyed a day of baseball on Saturday. (Christopher B. Stoltz / S&S)

With tickets going for a buck on base, however, a few hundred airmen and their families got a taste of Japanese baseball during &#8220;Yokota Day&#8221; at the Invoice Seibu Dome on Saturday. The 374th Services Division hauled five bus loads of people to the nearby park for a minor league matchup between the AAA affiliates of the Yomiuri Giants and Seibu Lions.

Absent were the banging drums, rhythmic chants and waving flags that accompany almost every pitch of every game during the Japanese major league regular season, but the setting still offered plenty of Kirin beer, sushi, squid and curry as cultural substitutes for the traditional American ballpark staples of Budweiser, hot dogs, french fries and mustard-coated pretzels.

An American pitcher who started the game for Seibu opened with three walks and a hit batsman &#8212; and was promptly yanked for a reliever.

&#8220;It&#8217;s not every day you get to see a pitcher taken out in the top of the first,&#8221; said Airman 1st Class Michael Rogers of Warner Robins, Ga., who arrived at Yokota in January and works for the 374th Operations Support Squadron.

This marked Rogers&#8217; first trip to a baseball game of any kind.

After the game, the Japanese players conducted a skills clinic on the Seibu Dome&#8217;s artificial turf for players ages 9-18 from Yokota&#8217;s youth sports program.

Justin Lucas, assistant marketing director for the 374th Services Division, labeled Saturday&#8217;s base outing a &#8220;trial run&#8221; and said a trip to see the Japanese big-leaguers would be considered.