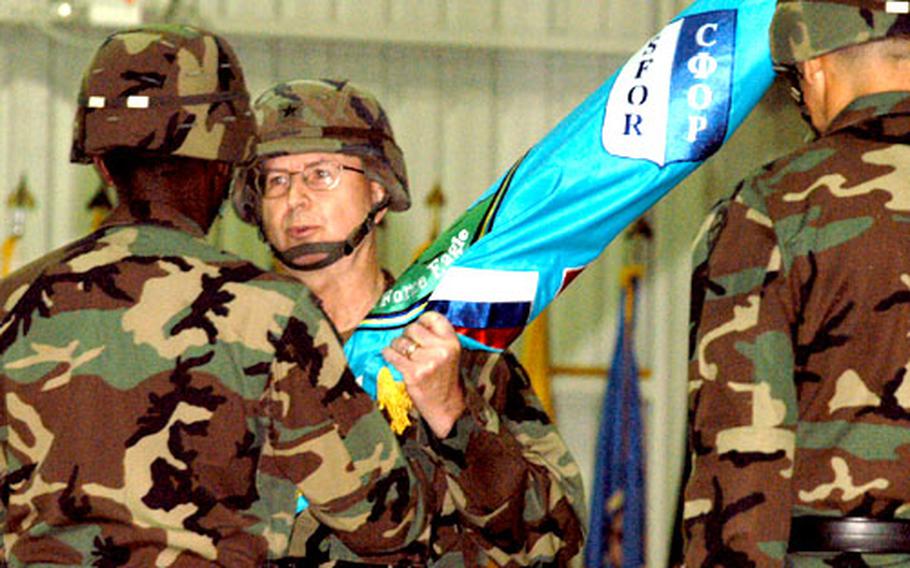 Brig. Gen. Richard C. Nash, center, takes over the command of Multinational Brigade North by receiving the guideon flag from Stabilization Force commander Lt. Gen. William E. Ward, after it was passed on by Brig. Gen. James R. Mason, right, during a transfer of authority ceremony at Eagle Base. (Ivana Avramovic / S&S)

Brig. Gen. Richard C. Nash, center, takes over the command of Multinational Brigade North by receiving the guideon flag from Stabilization Force commander Lt. Gen. William E. Ward, after it was passed on by Brig. Gen. James R. Mason, right, during a transfer of authority ceremony at Eagle Base. (Ivana Avramovic / S&S) 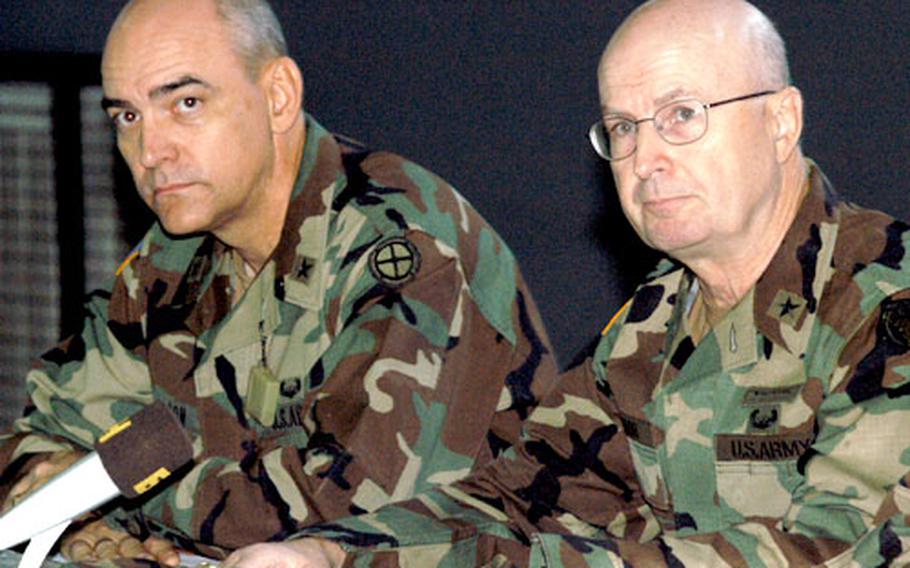 EAGLE BASE, Bosnia and Herzegovina &#8212; After six months of patrolling the towns and villages of Bosnia, National Guard troops from Kansas, Nebraska and Missouri are heading home.

The peacekeeping tasks will be taken over by members of the Minnesota National Guard&#8217;s 34th Infantry Division, the fifth rotation headed up by guardsmen.

Mason emphasized the cooperation with the local and international agencies, and looked back at some of his unit&#8217;s accomplishments:

His troops helped reopen the Tuzla International Airport, which shares the runway with Eagle Base, providing a much-needed modern way of transportation in the region.

Mason&#8217;s troops worked with local police to provide security for burial ceremonies in Potocari, near Srebrenica, in March, July and the last one in September. In September, 30,000 people showed up for the official opening of the memorial center by former President Clinton. More than 7,500 Bosnian Muslims were killed there on July 11, 1995.

&#8220;We feel like these ceremonies mark the beginning of the closure for many of the family and friends who lost loved ones here during the war,&#8221; Mason said.

Other important accomplishments were the closure of several weapons storage sites of the Bosnian armed forces, the removing of illegal weapons caches from the environment, and the successful carrying out of operations harvests and demining efforts.

The incoming commander, Brig. Gen. Richard C. Nash, said he hopes to continue the positive cooperation with the local people and government officials.

After a transfer of authority ceremony on Tuesday, Nash said he also hopes to further the Bosnian defense and economic reforms, as well as assist with the educational reform for the children who now study in ethnically-divided school systems.

&#8220;I would like to tell you that our soldiers have trained hard to prepare for this important mission and that we consider it a great honor to serve the people of Bosnia and Herzegovina,&#8221; Nash said.

&#8220;My intent is to continue to capitalize on the successes that have already been achieved by the previous Stabilization Force.&#8221;