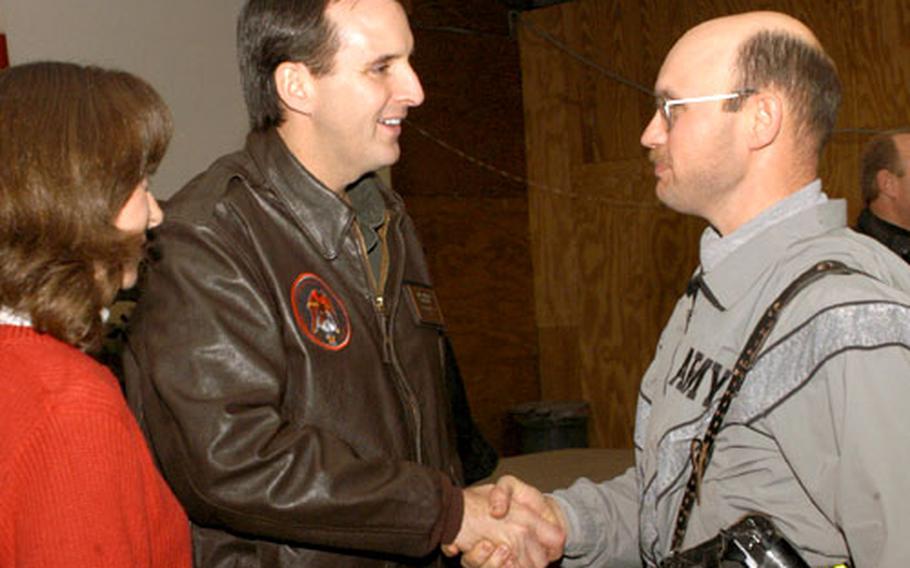 EAGLE BASE, Bosnia and Herzegovina &#8212; Minnesota National Guardsmen filled the tent used as the base movie theater, not to see the latest Hollywood release, but to greet their governor.

In a town hall-like meeting, Gov. Tim Pawlenty thanked the troops for their service and sacrifices.

&#8220;Please know that all of Minnesota and all of America deeply, sincerely appreciates the sacrifice that you are making to be here in Bosnia,&#8221; Pawlenty said. &#8220;Being away from your families for six, eight months, &#8230; is really hard, it is really hard, but we also want you to know that it is appreciated and that we&#8217;re grateful to you. And this country would not be the country that it is without you.&#8221;

Pawlenty said he was looking into incentives to help persuade troops to stay in the Minnesota National Guard.

&#8220;One, if not the highest, priority of government is making sure that we have our public safety and our military at a level that is appropriate,&#8221; Pawlenty said.

&#8220;The first thing I would be willing to put money in as soon as we have any is the National Guard incentives.&#8221;

Pawlenty spent a day with Camp McGovern troops after a nine-hour drive from Budapest, Hungary.

On Monday, he visited a village near Tuzla for refugee children who lost one or both parents during the civil war in the early 1990s. He later visited a memorial to the thousands killed after the fall of Srebrenica in July 1995.

The governor&#8217;s wife, Mary, a Dakota County District Court judge, encouraged the troops to have their families take advantage of the family support program she created. Organizations across the state volunteer to help with shoveling snow off the sidewalks, cooking meals, shopping for holidays or anything else the families of deployed soldiers need help with.

&#8220;You are here keeping the peace and creating an environment and a stabilization such that this kind of thing will never happen here again,&#8221; Mary Pawlenty said. &#8220;And I can&#8217;t think of anything more important on God&#8217;s earth than you keeping the peace in this region.&#8221;

The troops also gave their thanks to the couple.

Staff Sgt. Tom Murray, senior chaplain&#8217;s assistant for Task Force Eagle, stood in line to meet and have a picture taken with the governor and his wife.

He held a photo of his family and the governor, taken before Murray left for Bosnia, hoping to get it autographed.