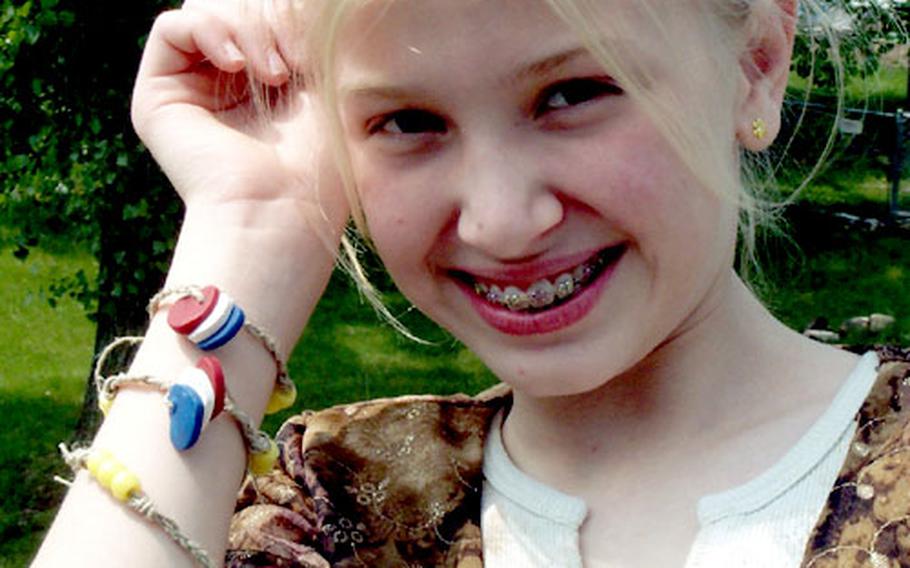 Jenessa Alexis Largent has 36,987 reasons to feel good about herself.

What started as a whim for the 12-year-old to remind herself of her uncle serving in Iraq has grown and grown.

In April, Jenessa, of White Bear Lake, Minn., made herself a bracelet in honor of Sgt. 1st Class Mike Chamorro, serving in Kirkuk. Her friends liked the idea and also had relatives deployed &#8212; an uncle here, a cousin there. So she made more bracelets.

She has spent her summer vacation twisting and tying, beading and baking, folding and fretting &#8212; and sweet-talking her parents, two older brothers, one older sister and anyone else she can into helping out.

Aunt Judy Chamorro, married to Uncle Mike who&#8217;s deployed, said she cried when she first saw Jenessa&#8217;s Web site and discovered what her niece had started.

&#8220;People who don&#8217;t know the military don&#8217;t understand what people go through when their loved one is away. &#8230; This brought out a hint of that, and gave a lot of people something to symbolize unity,&#8221; said Chamorro, who lives in Vilseck, Germany, with her husband and two children.

Mike Chamorro is with the 201st Forward Support Battalion out of Vilseck, but for operations in Iraq he is attached to the 173rd Airborne Brigade, out of Vicenza, Italy.

Jenessa&#8217;s parents &#8212; her father is a concrete layer and her mother sells dancewear at Jenessa&#8217;s dance recitals and competitions &#8212; have paid for all the supplies. Initially, they paid for the postage to mail out orders of bracelets, many of which have gone to families awaiting loved ones in Fort Hood, Texas, and Fort Bragg, N.C.

&#8220;The bracelets are free, and we&#8217;re also accepting donations, but [the money raised] just goes to help pay for the postage to send them out. Did you know it costs 49 cents to send out one bracelet?&#8221; said Jenessa, adding she has no idea how much the family has spent.

The preteen is a whiz at giving interviews &#8212; speaking slowly and articulately, lobbing a well-placed joke or funny fact here and there.

Her celebrity status has gotten her praise from heads of state.

She rattles off a partial list: &#8220;From the Department of the Army, Navy, the secretary of the Air Force, the U.S. Department of State, the embassy of Australia, the Prime Minister of Israel Ariel Sharon, the Danish Embassy, the Queen of England, Tony Blair, the ambassador of France.&#8221;

After all, she brought 500 bracelets and doled them out to the audience and staffers.

Anything from Secretary Donald Rumsfeld?

She and her mother are visiting Washington this weekend and touring the Pentagon on Monday with the aide-de-camp to the Army&#8217;s Vice Chief of Staff. Then it&#8217;s off to a luncheon where she&#8217;ll meet Gen. John Keane.

&#8220;This is now a symbol of hope and freedom from terrorism and a future that one day will be safe for children of the world who are next in line to inherit the planet.&#8221;