Minesweeper life is good, but being home is better 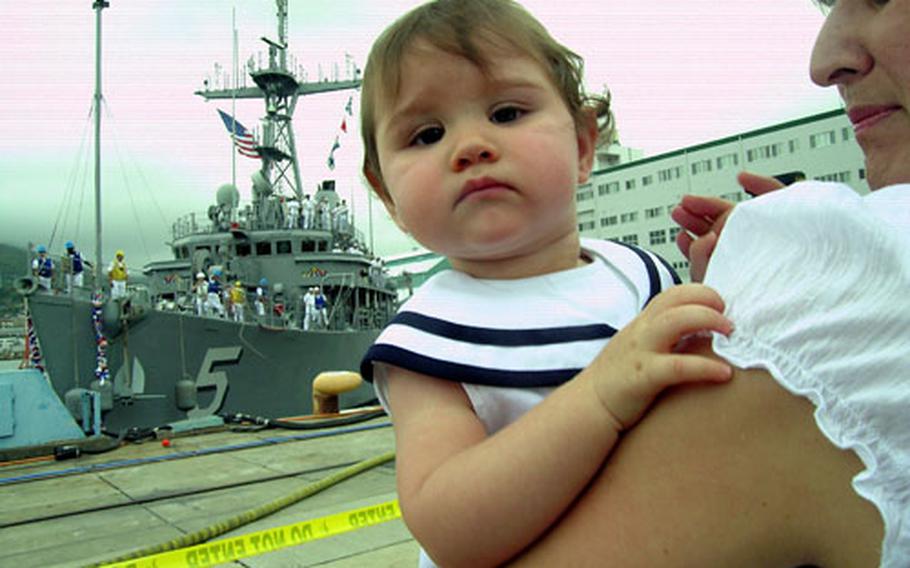 Sofia Summerhill&#39;s dad was almost home as the USS Guardian tied up at Sasebo Naval Base&#39;s India Pier. Her mother, Yvonne, is holding the 11-month-old. Sofia had no interest in wearing her sailor hat. (Allison Batdorff / S&S)

Sofia Summerhill&#39;s dad was almost home as the USS Guardian tied up at Sasebo Naval Base&#39;s India Pier. Her mother, Yvonne, is holding the 11-month-old. Sofia had no interest in wearing her sailor hat. (Allison Batdorff / S&S) 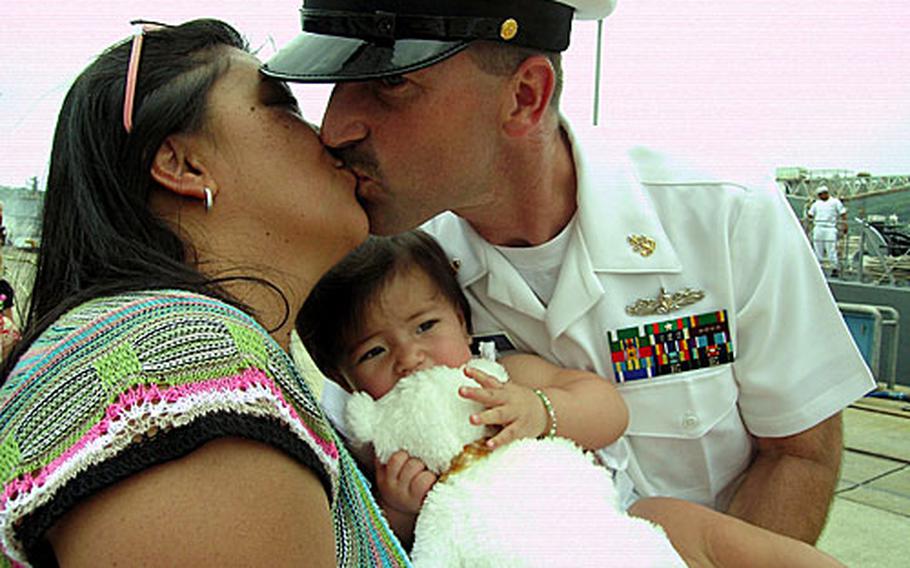 Jury Venczel, left, bought five tickets to "first kiss" raffle so her husband, Senior Chief Petty Officer Dean Venczel, could be first off the USS Guardian for a smooch with her and their daughter, Ashley. (Allison Batdorff / S&S) 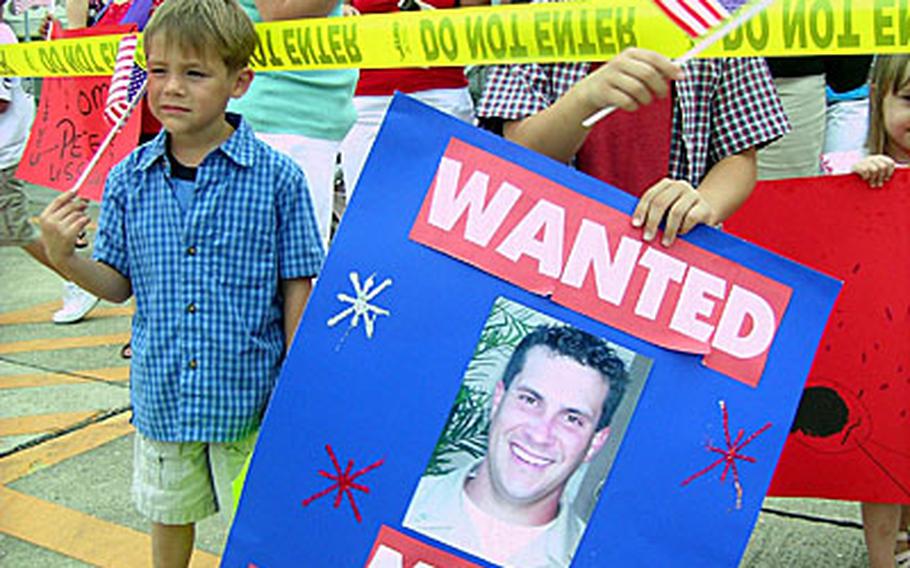 Kaleb, left, and Zachary Douglas wait for dad on the pier as the USS Guardian and USS Patriot returned to port. (Allison Batdorff / S&S)

SASEBO NAVAL BASE, Japan &#8212; There are only four bathrooms on a U.S. Navy minesweeper.

So, while a couple of plugged toilets might be no big deal on an aircraft carrier, on minesweepers they are cause for major alarm, explained Expeditionary Strike Group 7 Lt. j.g. Eric Daley.

There&#8217;s only one passageway to get aft on the 224-foot ships, but traffic jams are minimal because the crew is so small, Daley added.

And no one gets too attached to their iPods or computers, as they may be pitched overboard if they sail into mined waters, said USS Guardian Ens. Jorge Roldan.

Life on a &#8220;sweep&#8221; differs from other ships in the fleet, said USS Guardian and USS Patriot crews when they returned Friday to Sasebo Naval Base.

The two Avenger-class mine countermeasures ships carry roughly 80 males each and sail the Pacific clearing waterways of mines.

Because mines cue off changes in magnetic and acoustic fields, the ships have wooden hulls and metals are restricted &#8212; from what sailors can bring aboard to the pots and pans in the galley.

And just like sailors from the past, crewmembers are responsible for many duties.

On the Guardian, for example, Roldan heads up the ship&#8217;s combat information, Morale, Welfare and Recreation, and transition &#8212; and, in the last deployment, served as the operations officer.

Younger sailors also have more responsibility than they do on other ships, DeMoss said.

Fireman Apprentice Ronrico Jones said he liked this aspect of working on Guardian.

Several sailors also said they had to get used to an all-male ship, due to the space and berthing issues that restrict women from serving. But in general, the atmosphere is more casual, and the crew knows each other well &#8212; from the top of the chain of command to the bottom, said Petty Officer 2nd Class Dominic Mararchi, whose last command was a guided-missile cruiser.

What you hear waiting on the pier

&#8220;Most of the sailors on these ships are unaccompanied, so they see the families on the pier and head off on their own. We&#8217;re here because we think every sailor deserves a welcome home.&#8221;&#8212; Jerry Havens, educational service specialist, Sasebo Fleet & Family Support Center