Santa Claus passes out donated toys from the “A Time for Smiles” program Tuesday in Mannheim. (Seig Heppner / Courtesy of U.S. Army)

Santa Claus passes out donated toys from the “A Time for Smiles” program Tuesday in Mannheim. (Seig Heppner / Courtesy of U.S. Army) 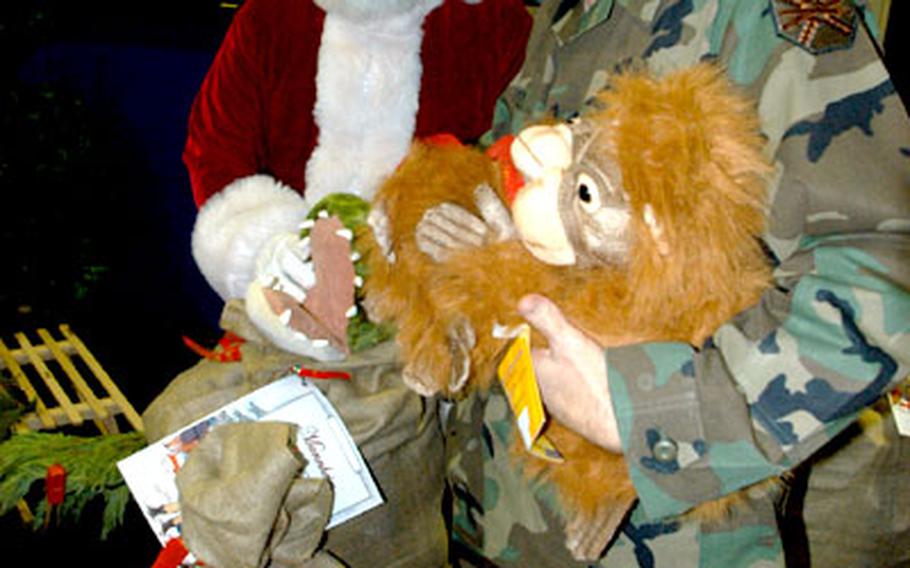 MANNHEIM, Germany &#8212; Children in U.S. military communities overseas will have a good reason to smile in the next few weeks thanks to a national toy drive.

Senior military leaders and community officials from the 293rd Base Support Battalion gathered Tuesday at the Top Hat Club on Benjamin Franklin Village to pass out toys.

Later that afternoon, dozens of children arrived at the club to share in the gift-giving. Santa Claus was on hand to distribute large sacks of toys.

Caring for children is a &#8220;paramount issue,&#8221; Hall said. &#8220;Providing soldiers with programs is just as important as taking care of those they pledge to defend. This is a great way for America to come forward with tangible items to show they care.&#8221;

The holiday toy drive is in its third year. Last year was the first time it reached Americans stationed in Europe.

Army officials in Schwetzingen distributed toys to all Army Child and Youth Services programs in Europe. Then, community centers and chapels make sure the toys get to the youngsters.

Each military community in Europe will hold similar events to pass out toys, said Millie Waters, spokeswoman for IMA-Europe.