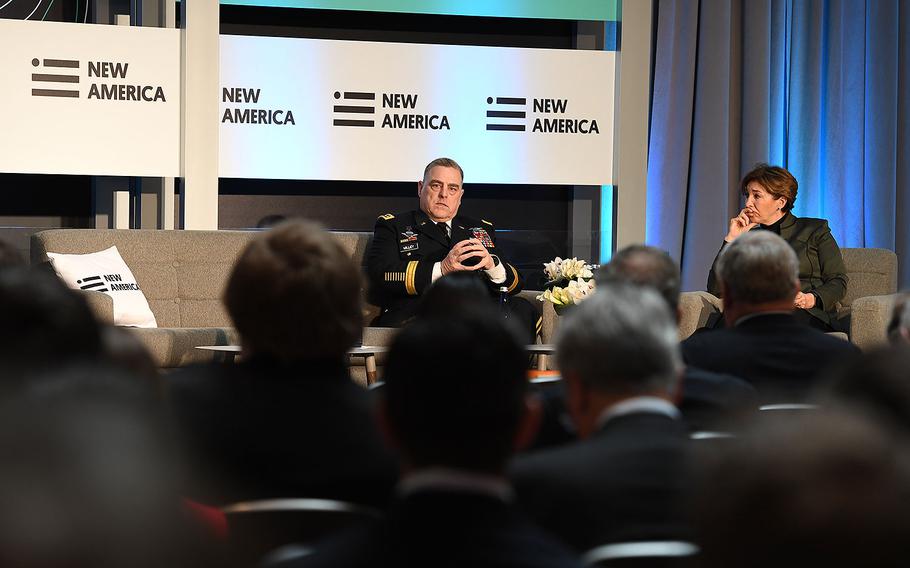 WASHINGTON — The Army will use an influx of thousands of new soldiers in the coming months to fill gaps in combat readiness at tactical units across the force, the service’s top general said Tuesday.

“The biggest drag on Army readiness right now is personnel,” Gen. Mark Milley, the Army chief of staff, said at the Future of War Conference in Washington. “We have units out there — many, many units — that have significant holes in their personnel structure, and we need to fill those holes in order to make the … Army ready for whatever the president needs it to do, whatever the nation needs it to do.”

The troop increases were mandated in the 2017 National Defense Authorization Act, but the Army only recently began expanding its force because it was unclear it would receive the necessary funding while operating on a continuing resolution of its 2016 budget.

The $30 billion supplemental budget that President Donald Trump proposed last week to fund the Defend Department through September included funding that would allow the service to pay for the increased force strength into 2018. While Trump’s supplemental budget request, which includes $8.5 billion for the Army, must be approved by Congress, Republican leaders have expressed support for expanding the size of the military.

The service has already begun increasing its recruiting goals to achieve the expansion quickly, Milley said, indicating the Army was confident it would receive the funding it requires.

At its height in 2011, the Army boasted nearly 570,000 active-duty troops, but budget constraints and the drawdown of combat operations in Iraq and Afghanistan forced the service to downsize.

Nonetheless, soldiers have remained busy across the world. Army brigades regularly deploy to Eastern Europe, Kuwait and South Korea, and the United States has regularly increased its troop strength in Iraq and Syria to support the fight against the Islamic State group. Top military officials in recent months have signaled more American soldiers could also be needed in Afghanistan.

Those missions — an others in dozens of additional countries — have left many units with deficiencies in soldiers who maintain equipment and front-line fighters, Milley said.

“We have significant readiness issues and the biggest one is personnel, and we are going to fill those holes,” he said.

In addition to adding soldiers to undermanned units, the Army will add some of the influx of soldiers to Fort Stewart, Georgia, where the 2nd Brigade Combat Team, 3rd Infantry Division is undergoing a conversion from an infantry brigade to an armored brigade, said Maj. Gen. Jason Evans, the Army’s military personnel management director.

The service plans to use an uptick in recruiting and retention of current soldiers to reach its new goal, Evans said

“We’re looking for and want to retain high-quality young men and women who are resilient, fit, soldiers of character,” he said.