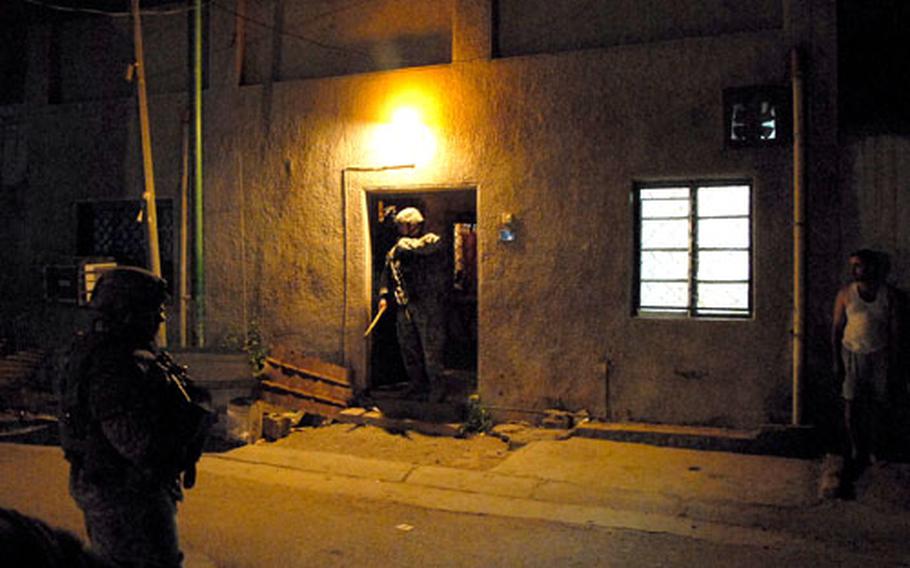 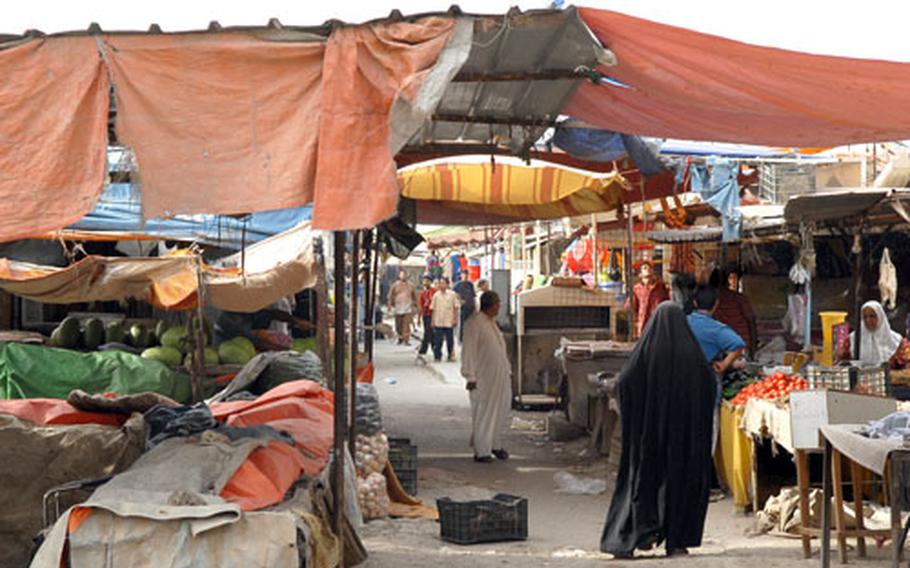 The troops&#39; goal is to keep this market and surrounding areas safe from militia attacks and show that the security plan for Baghdad — which will be assessed in September — is working. (Zeke Minaya / S&S)

ZAFARANIYAH, Iraq &#8212; The first shots were fired into the sky, meant to scatter the crowd of people away from the intended target. The gunfire that followed was aimed at Nasha&#8217;at al Husseiny.

Out buying bread with his nephew earlier this month, the neighborhood council member from the Zafaraniyah district was mortally wounded in a drive-by shooting. In his final moments, Husseiny handed his pistol to his nephew and told him to defend himself.

Since the killing, the remaining council members have made plans to meet in secret and away from the government offices adjacent to a coalition outpost.

Since the launch of the security push in February, the Zafaraniyah district in eastern Baghdad has been relatively calm, U.S. military officials said. But over the last month, stepped-up attacks against coalition forces and local politicians have signaled the first stirrings of an effort by Shiite militias to disrupt the area before the first official assessment of the security plan in September, officials said.

&#8220;Up until three weeks ago, we were able to focus on economic development and infrastructure repair,&#8221; said Capt. Dave Eastburn, of the 2nd Battalion, 17th Field Artillery Regiment, 2nd Infantry Division from Fort Carson, Colo. The unit is assigned to the area and is based at nearby Camp Loyalty. &#8220;But over the next three months, it is the goal of the militias to make us look like we failed. It is our goal to keep our foot on their throats,&#8221; he said.

The success of the plan depends on the cooperation or control of the militias. In the first months, the plan received tacit backing, if never a full endorsement, from militia leader and Shiite cleric Muqtada al-Sadr. He stood down his Mahdi Army militia and backed away from anti-American rhetoric. U.S. officials said al-Sadr left for Iran soon after the security plan was adopted, an assertion al-Sadr loyalists have denied.

But last week, the cleric made his first public appearance in months and called for the withdrawal of coalition troops and an end to clashes between the Mahdi Army and Iraqi security forces.

Sadr&#8217;s return coincides with reports of splintering in the militia. Tensions between political and military wings of the group have led to the defection of a number of extremist members, many of whom left Iraq for training by Iran&#8217;s Quds Force.

In a May 18 interview with the Military Times, Gen. David Petraeus, the senior U.S. commander in Iraq, called the Iranian influence &#8220;absolutely nefarious. It is hugely damaging to Iraq. It is fueling the Shiite militia side of things and causing enormous problems for Iraq.&#8221;

Commanders with the 2-17 expect to feel the effects of al-Sadr&#8217;s return in the streets of Zafaraniyah, a district of between 200,000 and 400,000 residents tucked between the Tigris and Diyala rivers.

&#8220;Sadr is a very influential person for the entire Shiite religion,&#8221; said Maj. Christopher Wendland. &#8220;His comments or his perceived comments reverberate down to our neighborhoods.&#8221;

In the last few weeks, Wendland said, Zafaraniyah has seen increased attacks against night patrols, stepped-up intimidation of local politicians &#8212; including a second assassination attempt &#8212; and a spike in violence against the civilian population.

With a U.S. military report scheduled for September, many in the unit are aware of what is at stake, Wendland said.

&#8220;We realize how important the September assessment is,&#8221; Wendland said. &#8220;But so do the militias. We are pushing against them and they are pushing against us. We are going to do everything we can this summer to give [Zafaraniyah residents] a chance.&#8221;

Eastburn said the unit has increased patrols, with several going out day and night. After weeks passing without a firefight, Eastburn said soldiers have been in three in recent days.

Intelligence reports in the area have warned of Quds forces or Iranian-trained fighters operating in the area, Eastburn said.

It is clear that Zafaraniyah councilwoman Madiha Hassan Al Musawi is no coward. In a male-dominated society, the diminutive 37-year-old mother of two has stepped forward and taken public office. She has stood her ground with Iraqi army leaders and developed working relationships with coalition officers.

But, she admits, the recent attacks against council members have forced the group to seek some distance from the coalition and have placed in jeopardy council elections slated for the coming weeks. She said she plans to meet with warring militia factions to broker a peace.