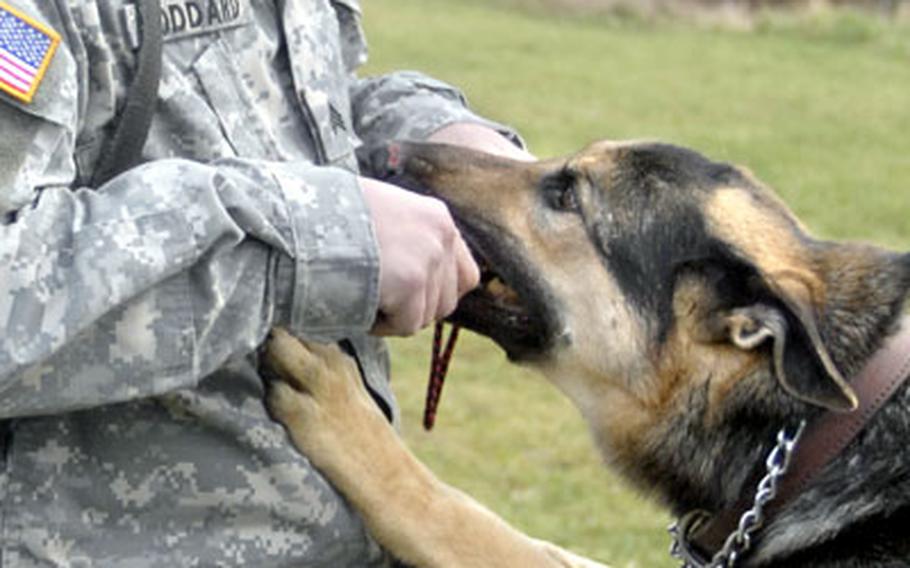 BAUMHOLDER, Germany &#8212; Jan, a military working dog with the 230th Military Police Company, has sniffed out explosives in the mountains of Afghanistan, helped protect a president and dodged mortars in Iraq.

His next mission should be fairly easy: just be a pet.

Army Sgt. Jason Stoddard, a military working dog handler with the Baumholder K-9 unit, has deployed to Iraq and Afghanistan with Jan. He will miss his explosives-detecting partner, who has been slowed due to a medical condition.

About three weeks ago, Jan was diagnosed with lumbosacral stenosis &#8212; a spinal disease that makes it difficult for military working dogs and police dogs to perform their rigorous duties because of the pain.

During his career, Jan has deployed across the globe. He&#8217;s had tours to Kosovo, Iraq and Afghanistan. During a mission in the mountains of eastern Afghanistan, Jan found a block of C-4 explosives. His huge find might have saved lives, Stoddard said.

One of Stoddard&#8217;s favorite stories about Jan was when they were trudging through the mountains of Afghanistan. It was so cold the two huddled together in the same sleeping bag to stay warm.

Although he can&#8217;t work for the military, Jan would make an excellent pet as long as he isn&#8217;t sent to a home with children, Stoddard said. Jan, for unknown reasons, isn&#8217;t fond of the little ones.

Military working dogs unable to perform their duties are considered for adoption after retirement.

The dog is videotaped as part of the evaluation to determined whether he is suitable for adoption and isn&#8217;t too aggressive to be a pet. The Department of Defense Military Working Dog Center at Lackland Air Force Base in Texas makes the final decision.