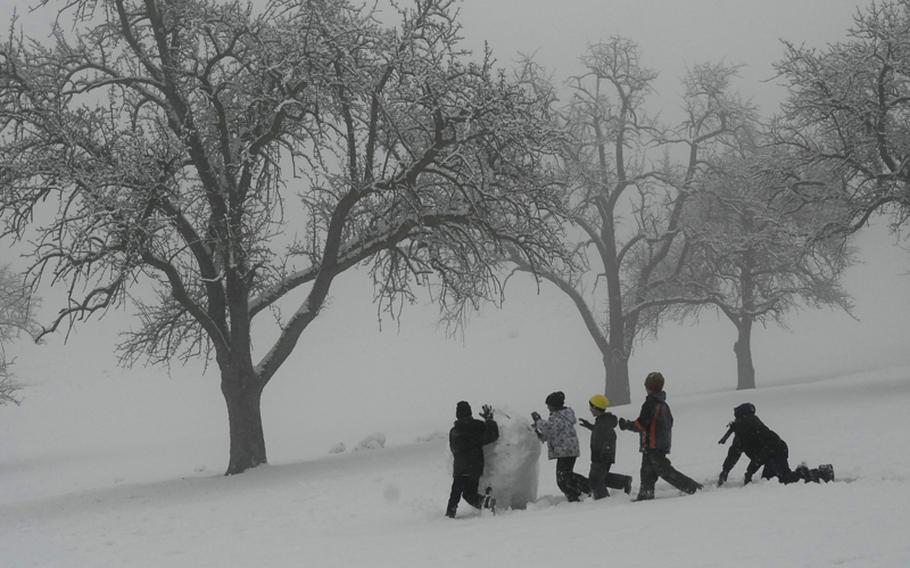 Children roll a snowball down a hill on Robinson Barracks in Stuttgart, Germany, on Monday as they collect snow for a fort they are building. Other children used the hill for sledding and snowball fights during their holiday break. (Warren Peace/Stars and Stripes)

Children roll a snowball down a hill on Robinson Barracks in Stuttgart, Germany, on Monday as they collect snow for a fort they are building. Other children used the hill for sledding and snowball fights during their holiday break. (Warren Peace/Stars and Stripes) 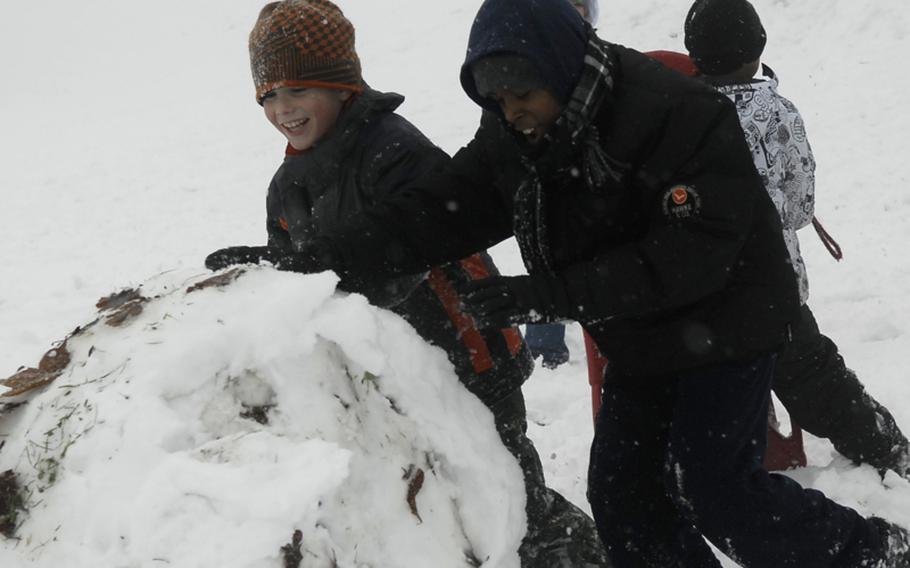 Luke Voorheis, 9, left, and Xavier McLean-Burrell, 12, roll a snowball down a hill on Robinson Barracks in Stuttgart, Germany, on Monday as they collect snow for a fort they are building with about a dozen other Robinson residents. (Warren Peace/Stars and Stripes) 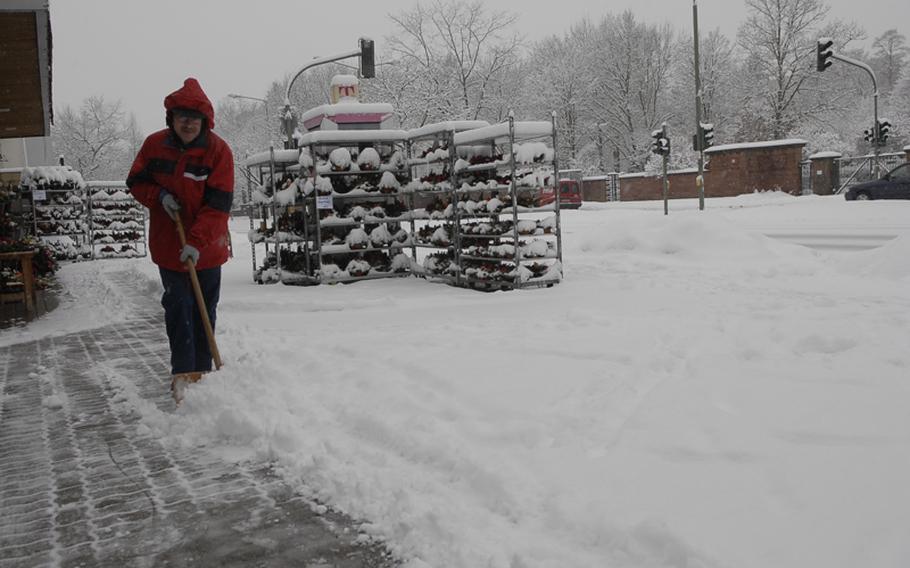 Jorgen Petzler shovels snow outside a flower shop in downtown Kaiserslautern Monday afternoon. The area was hit with another winter storm that snarled traffic throughout out much of the city. () 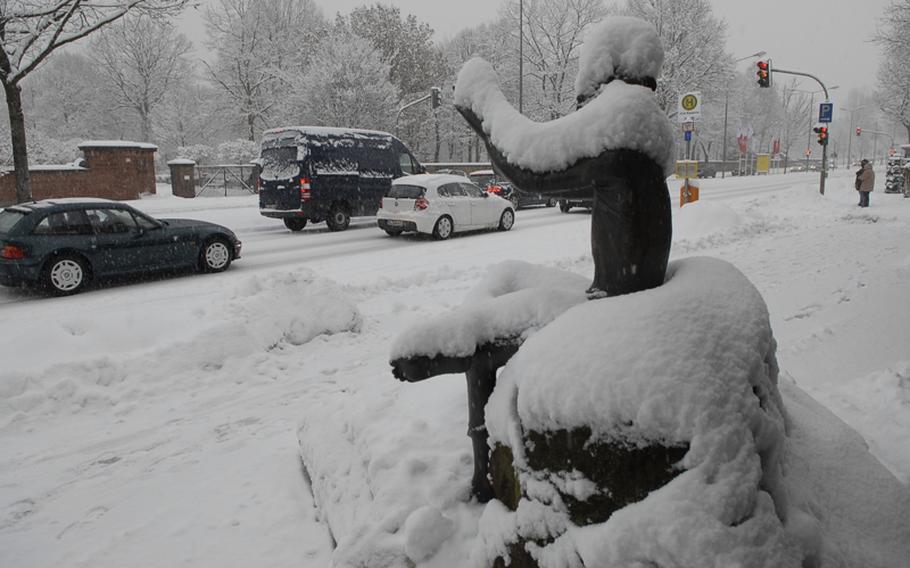 Snow piles up on a sidewalk statue in downtown Kaiserslautern in western Germany Monday afternoon. The area was hit with another winter storm that snarled traffic throughout out much of the city. ()

KAISERSLAUTERN, Germany &mdash; A surprise snowstorm blanketed much of Germany on Monday, prompting U.S. Army Europe to let workers go home from some bases in the Kaiserslautern area, and leaving slippery roads that caused dozens of accidents.

And even though the worst could be over, according to military weather forecasters, Monday&rsquo;s storm followed a weekend of foul weather that caused hundreds of flight cancellations at the international airport on Frankfurt, stalling some U.S. military members&rsquo; trips to the States for Christmas.

Some 300 flights were canceled on Monday, mainly because of problems elsewhere in Europe, airport operator Fraport said.

Hormeal Humphries, information specialist at the Frankfurt Airport USO, said that flights departing the airport headed stateside started to run on time again just yesterday afternoon, but it was a different story a couple of days ago.

&ldquo;There have been quite a number of (military personnel)who have been delayed for 24 to 48 hours from Friday to now...they were more than a little anxious, they were concerned, upset and mad,&rdquo; Humphries said.

A pair of U.S. contractors trying to make it from Baghdad to Atlanta for the holidays took a long detour before arriving at Frankfurt Airport on Monday.

Ann&rsquo;na Carson and Sherard Holt waited 10 hours in Kuwait before boarding a flight to Frankfurt, only to have their plane land in Turkey because the weather was so bad in Germany.

After the contractors were stuck in Turkey for seven more hours, they finally departed for Frankfurt. They hoped to rebook a stateside flight Tuesday.

Road conditions at a dozen garrisons in Germany, the Netherlands, and Belgium were designated as red, or hazardous, according to USAREUR&rsquo;s website. By mid-afternoon Monday, Army officials in several communities, including Kaiserslautern, Stuttgart and Heidelberg, had sent most workers home.

On Ramstein Air Base, gate guards were warning motorists to drive carefully. There were 14 accidents there due to the snowfall, said Tech Sgt, Monique Snider, of the 86th Security Forces Squadron. At Baumholder, however, only one accident had been reported.

Military weather forecasters said that Monday&rsquo;s snow probably is the worst of it for the week.

Warm fronts moving into the region should make for some rain and some snow in the coming days, according to Senior Master Sgt. David Tyler of the 21st Operational Weather Squadron at Sembach, Germany.

About 4 inches of snow was expected to fall Monday in the Kaiserslautern, Ramstein, and Sembach areas, Tyler said.