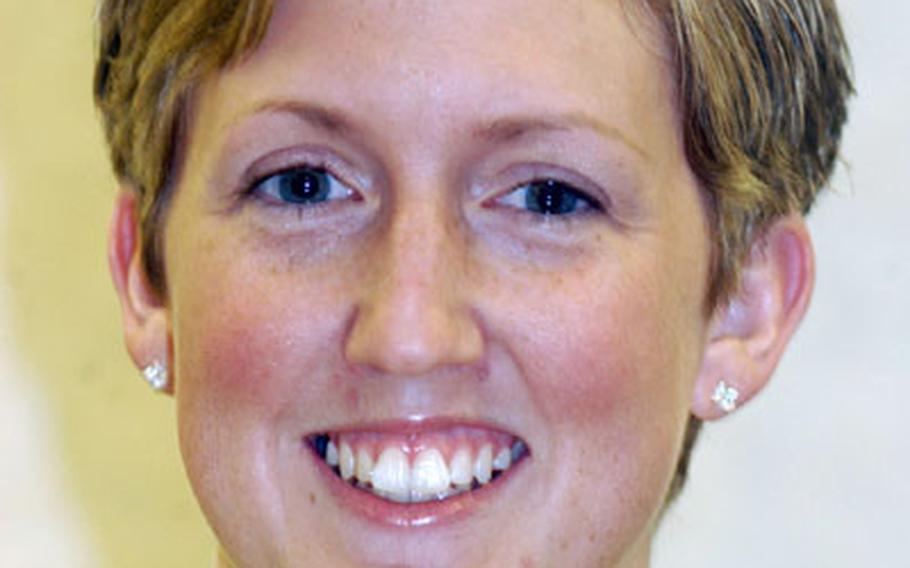 A little more than a year ago, Brandi Weddle found a pea-sized lump in her right breast.

Had she known the statistical probability of a 25-year-old woman having breast cancer, she might have shrugged off the discovery.

Statistically, she had little reason to be concerned.

Nearly all of those lumps, however, are benign. The American Cancer Society says the chance of a woman between the ages of 20 and 29 having breast cancer in any given year is about 1 in 22,000, or 0.0044 percent.

But Weddle wore dread and worry like a cloak.

Weddle first noticed the lump in January 2004 and had an ultrasound in March; by then the lump had grown to the size of a gumball, she said.

A bit of the lump was removed for the biopsy at Lakenheath, and before she completed the three-hour trip home to Fairford, the doctor had called with the result.

Weddle looked for information about breast cancer, something in which to find solace. But, &#8220;none of the information caters to women who are pre-menopausal, of child-bearing age or college age,&#8221; she said.

The issues of pregnancy and fertility and dating all come to the mind of a young woman with cancer, said Debbie Haber, communications director for the Young Survival Coalition, which formed in 1998 to raise awareness of young breast cancer victims.

Breast cancer can damage a young career, she said. How much should a woman tell her boss? When should she tell co-workers?

Also, she said, cancer in a younger woman is often more aggressive.

After hearing the bad news, Weddle and her husband returned to the hospital, bringing along their two children, Kaitlyn, now 3, and Emily, 2. Weddle said she didn&#8217;t want to be apart from them despite the late night trip.

A lumpectomy was scheduled right away, and another was performed nine days later so doctors could be sure they got all the cancerous material.

While the surgeries were considered a success, Weddle was subjected to several months of chemotherapy and radiation treatments. In all, she was blasted with radiation 33 times and underwent chemo six times.

The treatments left her sick, vomiting and weak.

Justin Weddle had his hands full. He, too, was suffering.

The worst moment, he said, was when his wife got very sick from the treatments in the middle of the night. The British hospital was a 40-minute drive away. The girls were half asleep in the back seat while his wife vomited in the front seat and he sat idling at a traffic light on dark and deserted streets.

The treatments ended last fall. In early 2005, Brandi Weddle was given a clean bill of health.

She&#8217;s now an advocate for more research about cancer in young women. She supports House Resolution 1245, also known as Johanna&#8217;s Law, which would create a national campaign to educate women and health care providers about gynecological cancers.

She always did monthly breast exams, but now she is an adamant supporter of the simple procedure that probably saved her life.

Earlier this spring, Brandi Weddle competed in a 5-kilometer Race for Life, which raised money for cancer research. Her husband was there when she crossed the finish line and burst into tears.

&#182; Breast cancer is the most frequently diagnosed cancer in women, accounting for one out of every three cancer diagnoses.

The following information from the National Cancer Institute indicates the likelihood of a woman in various age groups being diagnosed with breast cancer: