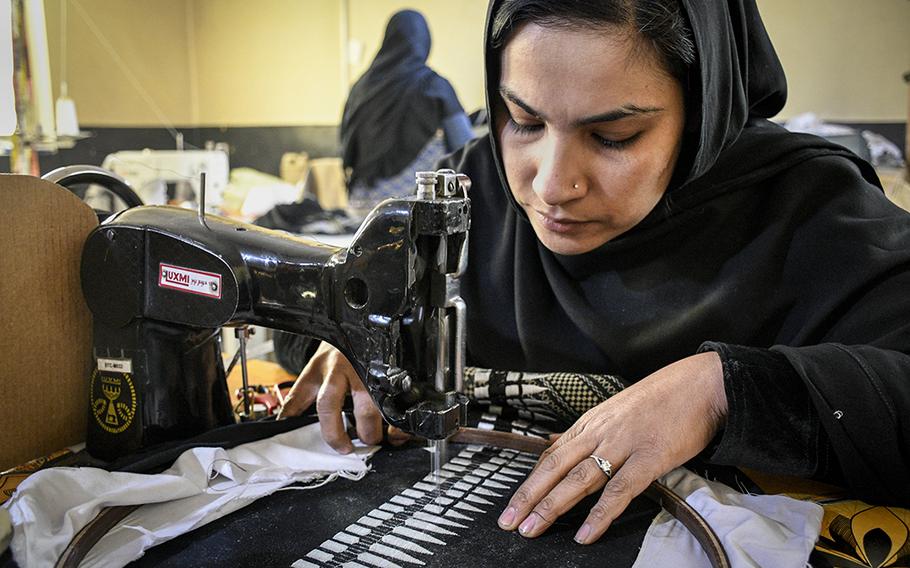 Buy Photo
Farahnaz, a worker at a factory in Kabul, sews a shemagh for Combat Flip Flops, a company started by a U.S. veteran and Ranger who deployed to Afghanistan and wanted to invest in the country. Farahnaz asked to be named by her first name, as she worries for her safety in working as a woman in Afghanistan. (J.P. Lawrence/Stars and Stripes)

Buy Photo
Farahnaz, a worker at a factory in Kabul, sews a shemagh for Combat Flip Flops, a company started by a U.S. veteran and Ranger who deployed to Afghanistan and wanted to invest in the country. Farahnaz asked to be named by her first name, as she worries for her safety in working as a woman in Afghanistan. (J.P. Lawrence/Stars and Stripes) 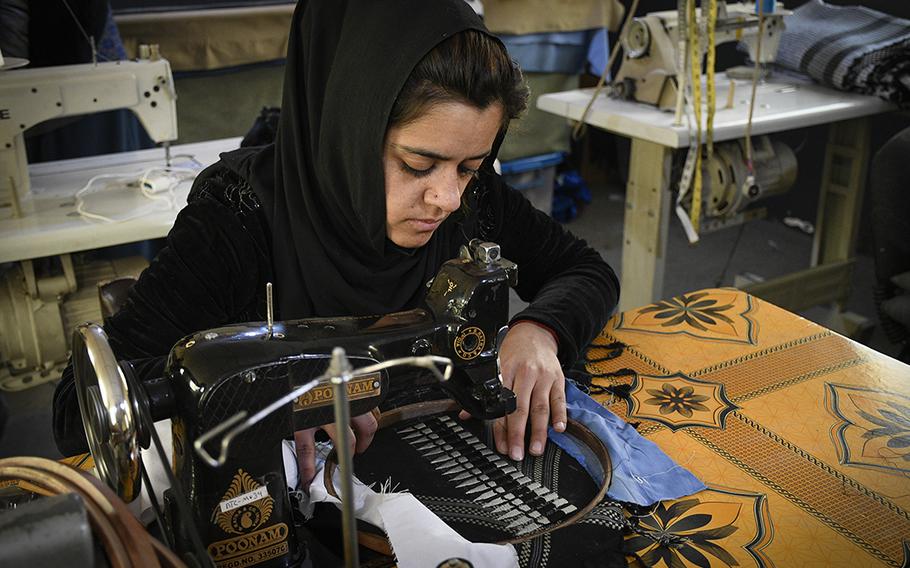 Buy Photo
Zahra, a worker at a factory in Kabul, sews a shemagh for Combat Flip Flops, a company started by a U.S. veteran and Ranger who deployed to Afghanistan and wanted to invest in the country. Zahra asked to be named by her first name, as she worries for her safety in working as a woman in Afghanistan. (J.P. Lawrence/Stars and Stripes) 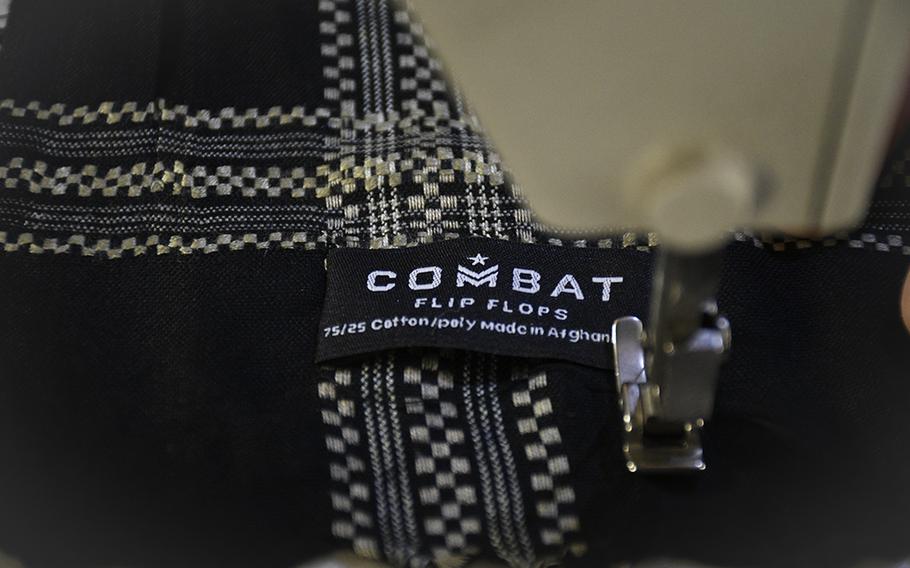 Buy Photo
Workers at a factory in Kabul, sew shemaghs for Combat Flip Flops, a company started by a U.S. veteran and Ranger who deployed to Afghanistan and wanted to invest in the country. The company's co-founder, Matt Griffin, said he wanted to help build up Afghanistan through private enterprise. (J.P. Lawrence/Stars and Stripes) 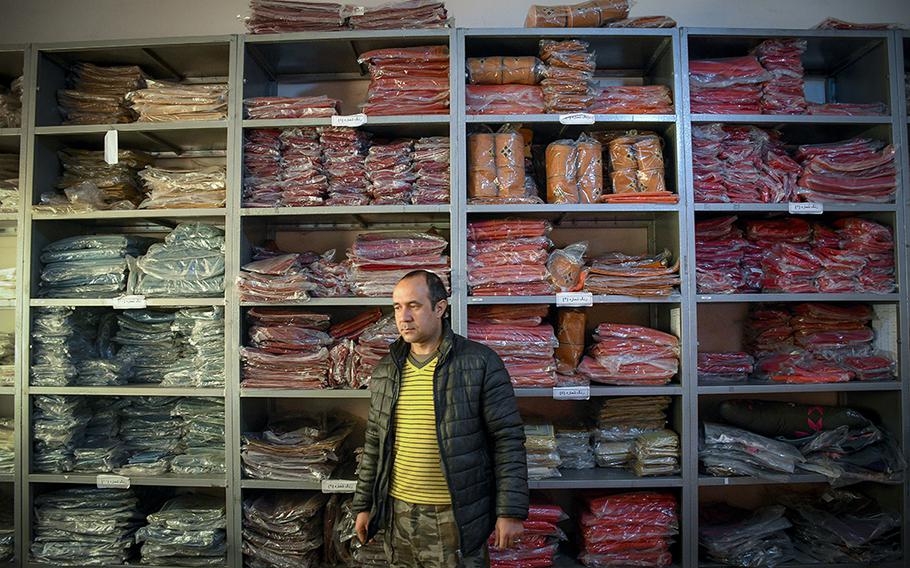 Buy Photo
Hamid Nori, who manages a factory in Kabul, helps create products for Combat Flip Flops, a company started by a U.S. veteran and Ranger who deployed to Afghanistan and wanted to invest in the country. The company's co-founder, Matt Griffin, said he wanted to help build up Afghanistan through private enterprise. (J.P. Lawrence/Stars and Stripes) 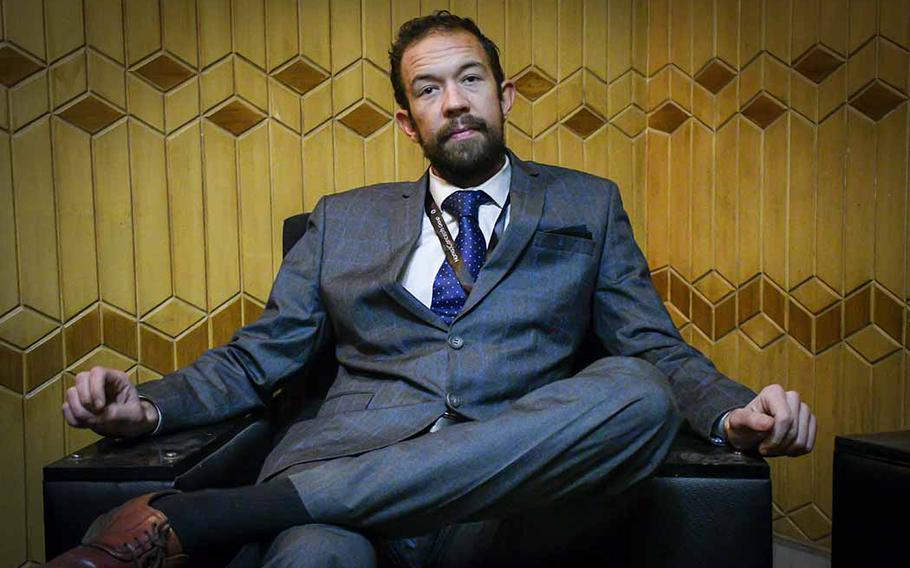 Buy Photo
Benjamin Slater, a veteran of the British Royal Military Police, deployed to Afghanistan twice before returning as a civilian to start a company there in 2014. Slater is now based in Kabul, and said he has seen his mindset change now that he does business in Afghanistan, instead of fighting in it. (J.P. Lawrence/Stars and Stripes) 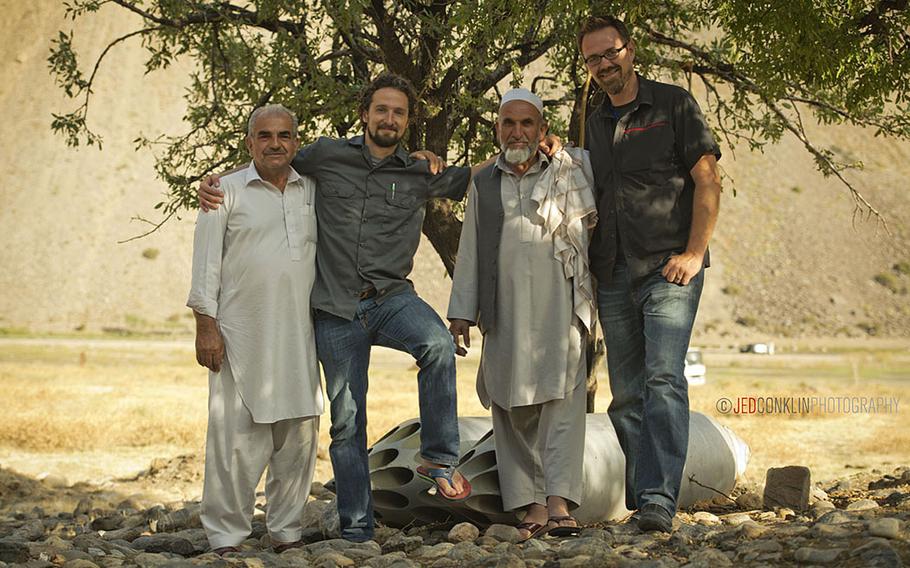 Buy Photo
Matt Griffin, his brother-in-law Andy Sewrey, and two relatives of their security team in Afghanistan pose for a photo while on a visit to the tomb of Ahmed Shah Massoud in the Panjshir Valley north of Kabul. (Photo Courtesy of Matt Griffin/Stars and Stripes)

KABUL, Afghanistan — Founded by former special operations soldiers, Combat Flip Flops seeks to make peace through trade by manufacturing wares in war zones and selling them to consumers far from the fight. But it’s a mission that has been stymied here in Afghanistan, where the soldiers once served.

While the United States and its allies have poured billions into the country to modernize its military and reconstitute its government, efforts to make over the private sector have similarly made limited progress. Many economic gains since 2001 have evaporated since largescale drawdowns more than four years ago, while instability, corruption and underdevelopment continue to hamper progress.

“It is damn near impossible to do modern manufacturing because of infrastructure,” said Matt Griffin, co-founder of Combat Flip Flops, discussing the challenges in Kabul. “It’s been a struggle to keep steady production there.”

Brownouts plague the capital, where the factory his company has partnered with is located, for example. As orders piled up around last Christmas, brownouts rendered electric sewing machines useless or required the use of costly diesel generators.

A former Army Ranger, Griffin is one of several veterans leading efforts to grow business in Afghanistan, often with some element of philanthropy. They have a motivation that is impossible to replicate, he said.

At the heart of these efforts is the belief that free-market capitalism can make a more lasting impact than a night raid. To Griffin, who recalled seeing abject poverty while on patrols in the country, the logic was clear: create more jobs and maybe there’ll be less war.

On its website, the Issaquah, Wash.-based apparel company offers a range of products that include the signature flip-flops bedecked with parts of bullet casings, jewelry made from unexploded ordnance and war scraps, and patches bearing messages like “let love rule.”

The plan for the business, inspired when Griffin visited a factory in Kabul where combat boots were being manufactured, was to take the capacity built up for manufacturing the tools of war and to use it to make commercial products sold to what the company calls the “unarmed forces.”

The goods are made in places like Colombia or Laos to help grow entrepreneurship in current or former conflict zones. Some part of the profits also goes to fund education for Afghan girls or pays for clearing swaths of territory of landmines. During an early 2015 TEDx talk in Tacoma, Wash., he touted the woman-owned, woman-operated factory in Kabul as running at full capacity.

That factory, once abuzz with dozens of workers weaving the company’s sarongs and checkered scarves, now has only five workers remaining. Factory operator Hassina Sherjan doesn’t know how long she can keep them employed, she said when Stars and Stripes toured the operation earlier this year. She’s borrowing cash two months at a time to keep them paid.

Combat Flip Flops is her only customer and she’s struggled to find more. Many of the foreign companies that once operated in Afghanistan left around the time the bulk of the international troops withdrew in 2014.

Much of the economic boom after 2001 was related to post-conflict reconstruction and was unsustainable, the Special Inspector General for Afghanistan Reconstruction said in a report last spring.

The Kabul government “did not put a real focus to empower industry” and has been unable to recruit investors reluctant to risk money in light of insecurity, bureaucracy and corruption, said Saifuddin Saihun, an economy professor at Kabul University.

It’s difficult for foreigners to invest in the country where financial credit is frowned upon for religious reasons, banks are often untrustworthy and contracts are only as good as the relationships they’re based on, Griffin said.

Sherjan’s factory is the fourth his company has partnered with in Kabul. The first three flopped — one had quality issues and two others closed suddenly.

Exporting goods from the landlocked country is another costly challenge, he said, making it difficult to compete with countries like China or Pakistan with developed ports and massive work forces.

Recent U.S. efforts have helped Afghan firms secure over $300 million in export deals since late 2017, but it’s hardly made a dent in a trade deficit of about $6.5 billion financed almost entirely by international assistance, the Pentagon’s lead inspector general for its Afghanistan mission said in a report to Congress released earlier this week. The country’s increasing population is expected to outpace economic growth in 2019, suggesting poor prospects for young Afghans in need of employment, the report said, citing World Bank data.

But some research suggests that lifting the country out of conflict through economic means is an unlikely prospect anyway.

Work-training for Afghan youths in Taliban-influenced areas did not diminish support for the militant group, and giving them cash actually increased it, one study found. That suggests support for the insurgency is rooted in political and cultural factors, not economic ones, said Yale University professor Jason Lyall, the study’s author, reached by phone.

While companies like Griffin’s may help those working for them, there’s little evidence the benefits go beyond those employees, Lyall said. The challenges facing the country are so vast that it’s unclear how much of an impact a few jobs can have.

Difficulties for Combat Flip Flops not been limited to Afghanistan, however. It’s growth has come too fast since Griffin and co-founder Donald Lee, a fellow former Ranger, pitched the business on “Shark Tank” in 2016, Griffin said.

Last year, it pulled in over $1 million in sales, up from $137,000 just three years earlier, before they appeared on the reality TV show. But the company has yet to post a yearly profit, Griffin said.

It invested too heavily in ineffective Facebook ads, overpurchased products that weren’t selling and ran out of cash. Low on both inventory and cash in January, the company borrowed $250,000, effectively starting at “month one,” Griffin said.

But, there’s an element of Don Quixote in his quest, he said in a phone interview earlier this year.

“I often think, ‘Am I the dude fighting windmills?’” he said in March.

Maybe his military experience trained him to do seemingly irrational things, he said. As a Ranger, that meant charging into danger. Today, that means continuing to invest in Afghanistan, despite the many challenges there.

“I know what we’re doing is right, I know at some point it will flip,” Griffin said. “Until it fails miserably, we’re not going to quit.”