Military vehicles get more than a once-over before shipping out 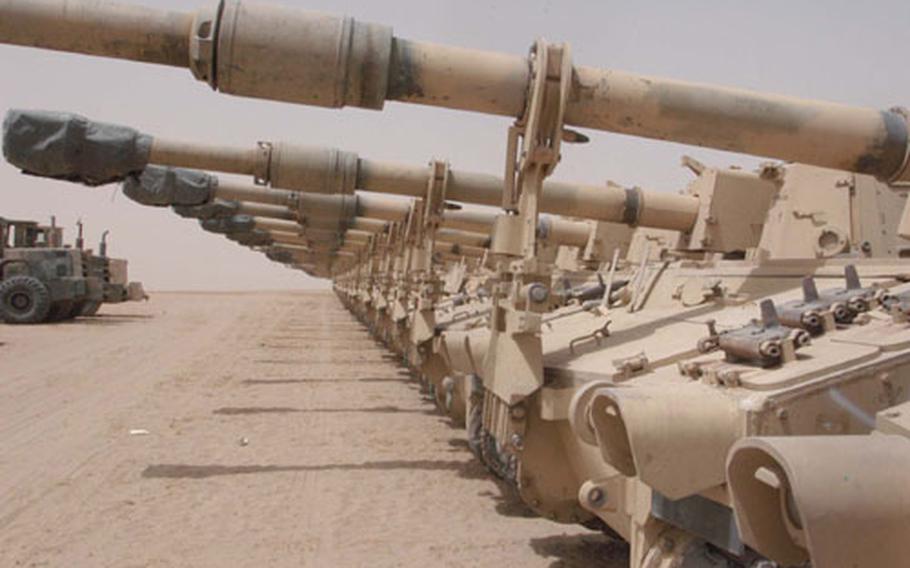 Tracked vehicles line up in the flat desert at Camp Arifjan, Kuwait, until they&#39;re loaded on ships and sent home. Soldiers are bringing back thousands of vehicles big and small from Iraq for a washdown and repairs before they&#39;re loaded up and shipped out. (Juliana Gittler / S&S)

Tracked vehicles line up in the flat desert at Camp Arifjan, Kuwait, until they&#39;re loaded on ships and sent home. Soldiers are bringing back thousands of vehicles big and small from Iraq for a washdown and repairs before they&#39;re loaded up and shipped out. (Juliana Gittler / S&S) 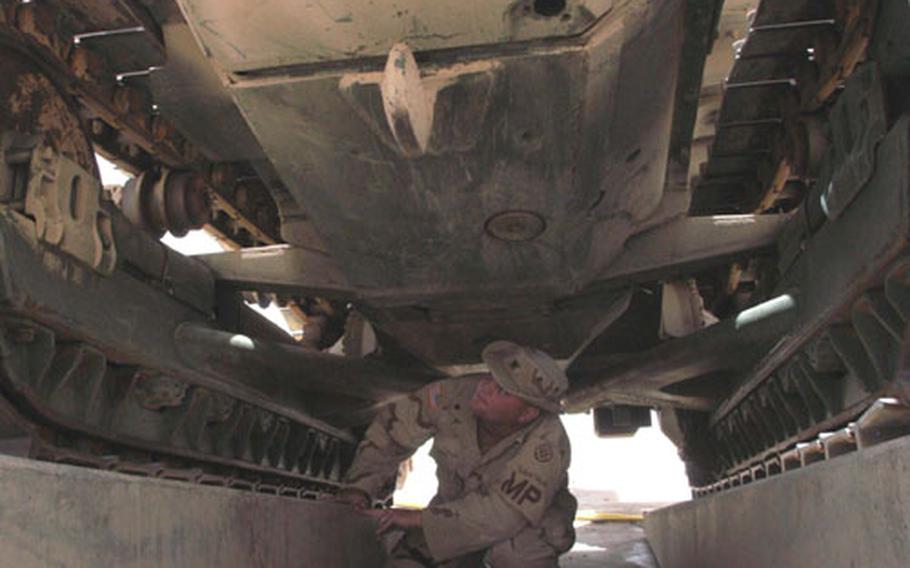 Spc. David Lapp, with the 324th National Guard from Middleton, Ohio, inspects a bulldozer for dirt or plant matter that could contain biohazards, and for hidden contraband, before the vehicle can be cleared for return to the U.S. Army&#39;s supply. (Juliana Gittler / S&S) 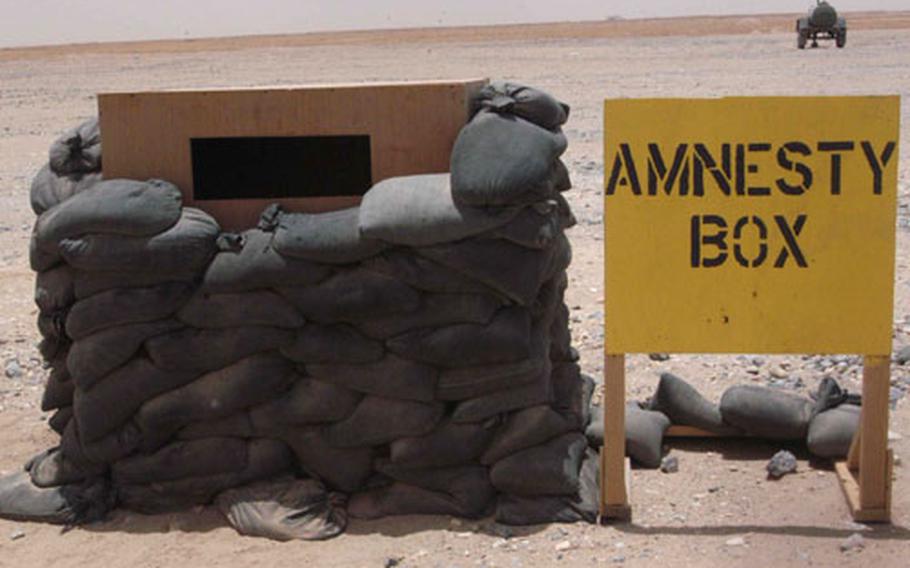 An amnesty box at Camp Arifjan, Kuwait, gives returning soldiers a place to deposit prohibited items they might have brought back from Iraq. (Juliana Gittler / S&S) 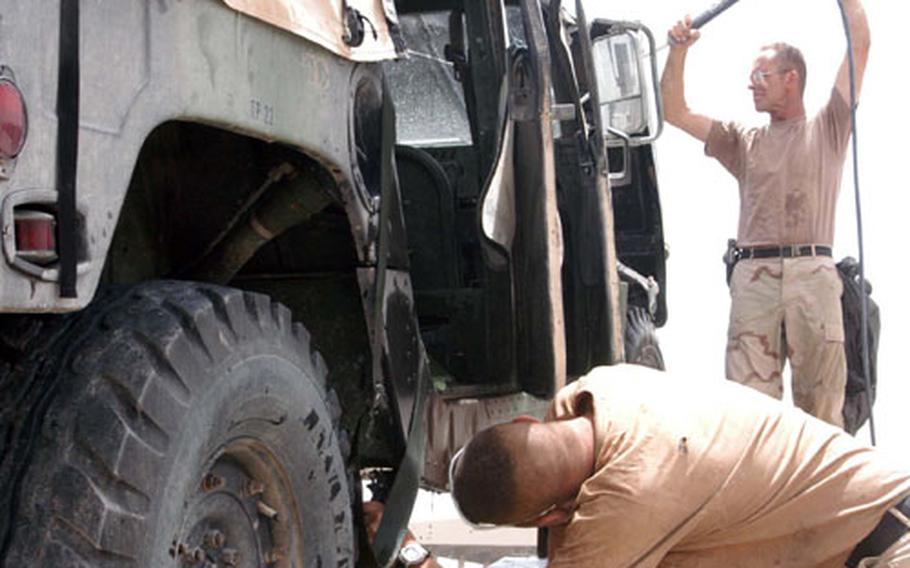 CAMP ARIFJAN, Kuwait &#8212; They helped build pipelines and faced enemy fire. Now, the Humvees, tanks and other Army vehicles used in the war in Iraq are ready for new assignments.

Troops can climb aboard a plane to head out, but the thousands of returning vehicles must be cleaned, inspected, cataloged and &#8212; where needed &#8212; disposed of appropriately.

That requires the work of 600 soldiers under the 356th Quartermaster Battalion and 41 soldiers and civilians working with contractors for the Army Materiel Command&#8217;s Combat Equipment Battalion.

About 350 vehicles pass through the system every day. That&#8217;s 7,500 so far including 3,800 tracked vehicles, said 356th Battalion Commander Lt. Col. Steve Scott, a reservist from Huntsville, Ala. The battalion is a mixture of active-duty and Reserve soldiers from several companies.

Off in the desert, staggering lines of tanks, trucks and tracked vehicles grow larger every day, waiting for shipment. Even shot-up tanks wait to leave.

The thousands of vehicles already processed are just the beginning. About four times that many will come through, Scott said.

Vehicles start with a triage. Some are hosed down and sent home. Others are refurbished and shipped off to resupply the Army&#8217;s prepositioned stocks around the globe for future conflicts. Still others, in too bad a shape to repair, are designated for disposal.

Drivers wash down their vehicles to U.S. Department of Agriculture standards before they&#8217;re inspected for contraband and plant matter.

&#8220;Compacted dirt, sand, anything that can be a biohazard&#8221; must go, said Spc. David Lapp, an MP inspector with the 324th Military Police Company from the Ohio National Guard in Middleton.

Other vehicles are cleaned, repaired and reissued.

&#8220;Units are trading in armored vehicles and picking up Humvees to go back north,&#8221; Shapiro said.

Smaller, lighter Humvees are better suited for peacekeeping patrols than a hulking Bradley, he explained.

Damaged vehicles are repaired on site, sent to larger depots elsewhere for repairs, or relegated to the Bone Yard &#8212; where acres of battered and war damaged vehicles sit. Many will be sold in Army reutilization sales.

Before they&#8217;re sorted, vehicles &#8212; and their drivers &#8212; are processed, some straight from battle. They follow a course across Arifjan, from the arrival area, through staging, cleaning and inspection.

The first step is the entry control point, for a briefing, cold drinks and snacks.

Drivers are also reminded of what they can&#8217;t take home &#8212; munitions, some war trophies and other contraband. Amnesty boxes are set up where soldiers can deposit forbidden items.

MPs also look for contraband, including the most popular &#8212; pistols and bayonets. Soldiers may not realize the bayonet they found could carry a blood-born pathogen, and they pop up every so often, Lapp said.