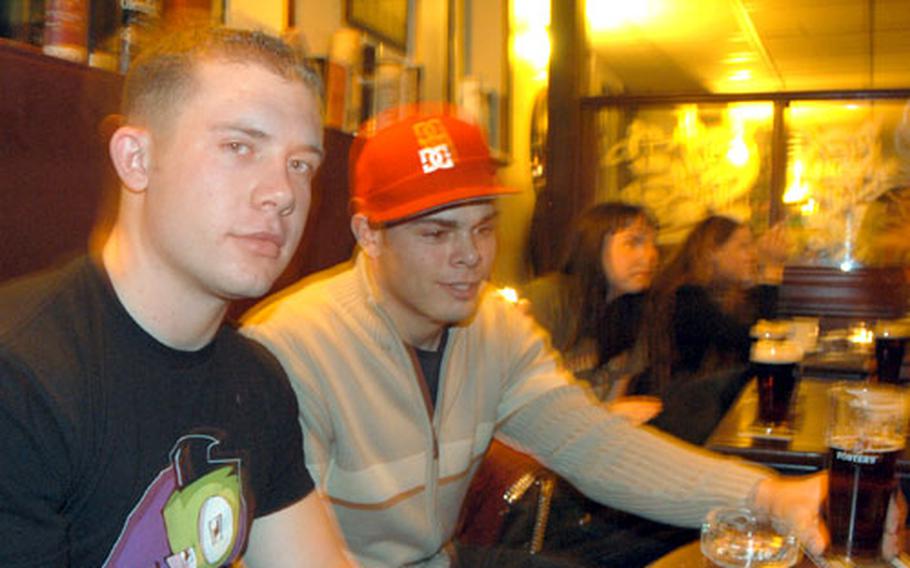 Spc. Joseph Carter, left, is the designated driver for Spc. Christopher Bucknell and other members of the Darmstadt, Germany-based 578th Signal Company, on a recent night on the town. (Michael Abrams / S&S)

A soldier held the stage, Pearl Jam in his voice and big acoustic strums rippling golden from his guitar. He and his buddy then tried out &#8220;La Bamba.&#8221; The baseball caps in the audience nodded along to the music.

A guy with a bagpipe would be next.

The recent jam session at the An Sibin pub in Darmstadt, Germany, isn&#8217;t unique to that festive stretch of late December staggering toward New Year&#8217;s Eve. But the swell of the crowd and its American accent implied that holiday season is indeed party season.

The military is advising troops to be safe during the holidays and to stay away from the driver&#8217;s wheel, regardless of how few eggnogs they&#8217;ve had.

Though it&#8217;s unclear yet how rowdy this year&#8217;s holiday season will be, the biggest U.S. military community in Europe reports a 44 percent increase in drunken driving for the entire year compared with 2003. And the year&#8217;s biggest night has yet to pop.

To stop trends like this, many bases offer programs to get troops home from the party in one piece.

One place that&#8217;s seen a big spike over the entire year is the Kaiserslautern, Germany, area &#8212; the biggest American military community on the continent &#8212; which has logged at least 198 cases of driving under the influence this year. That&#8217;s a 44 percent increase over 2003, according to Ramstein Air Base. The culprits in the 198 cases are split almost evenly between Army and Air Force personnel.

The military wants to fight this. Individual commands often promote designated-driver programs or offer taxi programs for nights out on the town.

&#8220;We always have a designated driver with us, or we&#8217;ll take a taxi,&#8221; said Spc. Joseph Carter, who took in the Pearl Jam-ness and bagpipes at the pub session. Carter was the driver that night.

Their command also keeps a taxi fund, the troops say.

The troops in the pub said that for them and their 578th Signal Company, such programs seem to be fighting drunken driving.

Ben Murray in Kaiserslautern, Germany, contributed to this report.