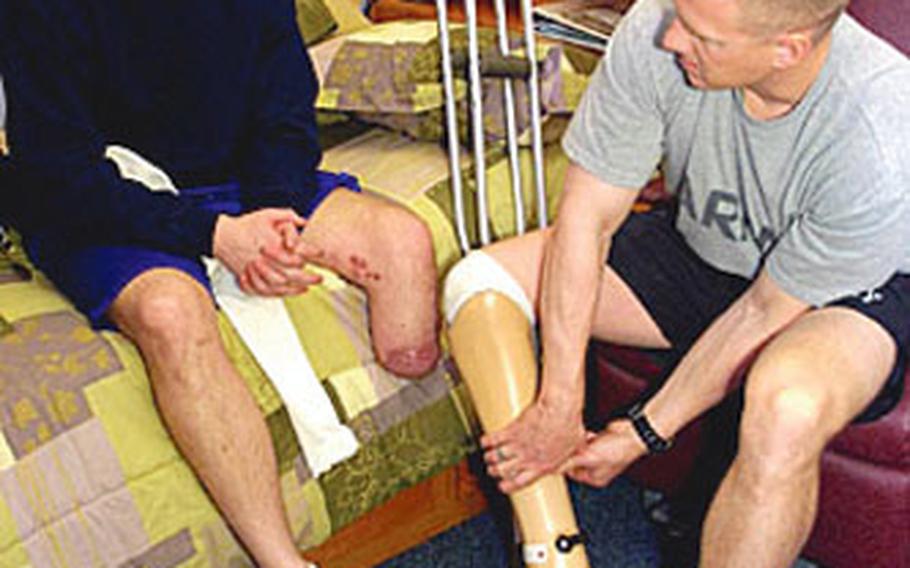 With the Iraq war producing a steady stream of severely wounded servicemembers, the departments of Defense and Veterans Affairs are struggling with calls to create a &#8220;seamless transition&#8221; for disabled warriors moving from active-duty medical care to long-term veterans care.

For some war wounded and their families, the seams between systems remain frustrating, even dangerous, according to stories shared during a recent public meeting of the Veterans Disability Benefits Commission.

&#8220;We&#8217;ve fallen through every crack imaginable,&#8221; said Sarah Wade, wife of Army Sgt. Edward Wade, who was medically retired after serving in both Afghanistan and Iraq with the 82nd Airborne Division.

Edward, 27, suffered severe brain injury and lost his right arm in February 2004 when a hidden bomb detonated beside his Humvee. He spent two months in a coma, during which the Army discharged him. That decision left Sarah, then Edward&#8217;s fiancee, in the fight of her life to get Edward, a &#8220;poly-trauma&#8221; patient, the right combination of specialty care.

The VA does have four poly-trauma centers and plans to build 21 more. The military also is moving to expand multitrauma capabilities. But the effort was too late, or existing facilities too far away, to help the Wades.

Sarah said she quit college and a part-time job to travel with Edward between VA hospitals in Richmond, Va., and Durham, N.C., Walter Reed Army Medical Center in Washington, the hospital at Fort Bragg, N.C., and the couple&#8217;s home in Chapel Hill, N.C. It has been a hectic and costly effort. But it thwarted VA plans, at one point, to keep Edward in VA nursing home, with a World War II veteran as a roommate and no specialists on staff to treat brain trauma or to rehabilitate an above-elbow amputee, Sarah said.

The Wades&#8217; appearance before commissioners, with Edward using his remaining hand to move the microphone so Sarah could be heard, was the emotional centerpiece in a compelling afternoon of testimony. The commission is conducting a comprehensive review of pay and benefits for disabled veterans, family members and survivors. Congress recently extended the due date for the commission&#8217;s report to October 2007.

Army Capt. Marc Giammatteo, victim of a rocket-propelled grenade, described his more modest try to bridge health systems. After more than three months and 25 surgeries at Walter Reed to try to save his right leg, Giammatteo was granted convalescence leave to visit family in Connecticut. His only promise to his doctors was to continue physical therapy to rehabilitate his leg. This he did.

During therapy, however, a recent skin graft began to ooze. Walter Reed advised he apply special gauze available only by prescription. Giammatteo decided to try the nearby VA hospital. He was turned away.

Maybe it isn&#8217;t practical to open VA clinics and hospitals to all active-duty members, Giammatteo said. But he urged the commission to recommend VA access at least for wounded servicemembers on convalescent leave.

Army Capt. David Rozelle said his big concern was with the timing of VA benefit counseling. Many wounded soldiers and Marines, newly arrived at Walter Reed or Bethesda Naval Medical Center, don&#8217;t want to hear about their veterans benefits. They want to get back to their units.

Rozelle, who lost his lower right leg to a tank mine in June 2003 while in Iraq with the 10th Mountain Division, said he listened to a bedside briefing from a VA representative, and then threw the paperwork in the trash.

&#8220;Seamless transition can only start when the veteran is ready for it to start,&#8221; said Rozelle. He suggested that VA counselors focus first on educating family members about benefits and health care options. Family or hospital staff can then alert VA counselors when their patients are ready to listen.

Rozelle said he speaks for a lot of wounded soldiers. But Rozelle also is exceptional, the first amputee in recent U.S. history to be redeployed to combat. He served a second tour in Iraq with his prosthetic leg. He conceded that the leg gave him problems, and he probably had returned too soon. He now administers the amputee care center at Walter Reed.

Spc. Kevin W. Pannell, with the Arkansas National Guard, lost both of his legs in Iraq to a grenade attack. His medical retirement and transition to veteran status have gone well except for some pay problems, Pannell said.

While Pannell was still on active duty receiving care at Walter Reed, his Guard unit was deactivated. Because Pannell&#8217;s name was on the roster, his pay stopped. Again, last September, when finally medically retired, his active-duty pay stopped but his VA compensation failed to start.

Wrapping up what the panel heard, Commissioner Dennis McGinn, a retired vice admiral, said only Sarah Wade&#8217;s &#8220;persistence and love&#8221; resulted in her husband getting the right care from the right specialists in a timely way. The right care is out there for most veterans, McGinn suggested, either in the military, from the VA or through contracted civilian providers.