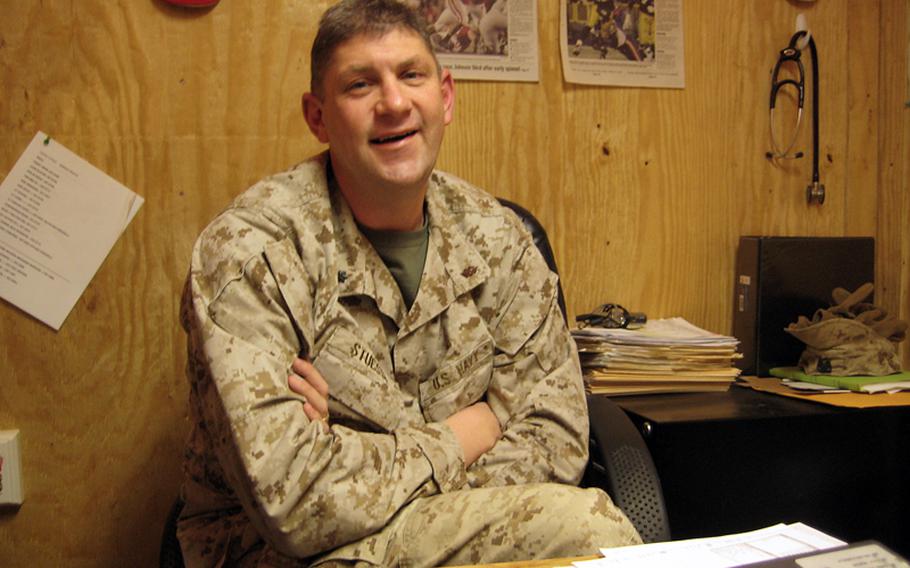 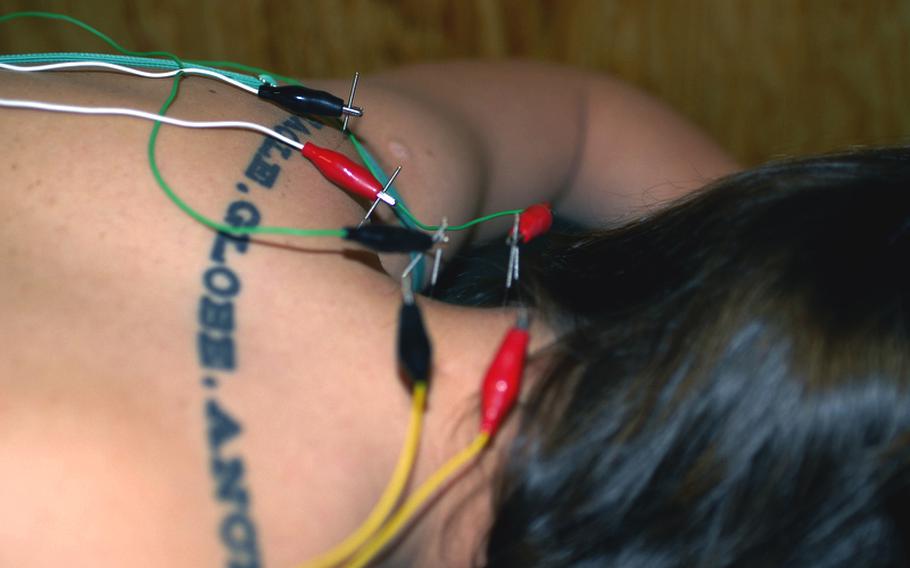 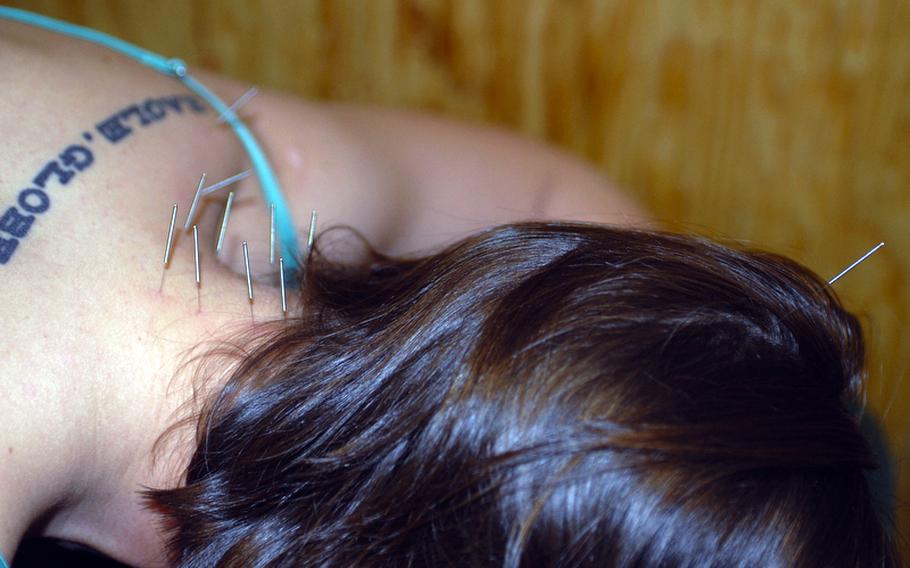 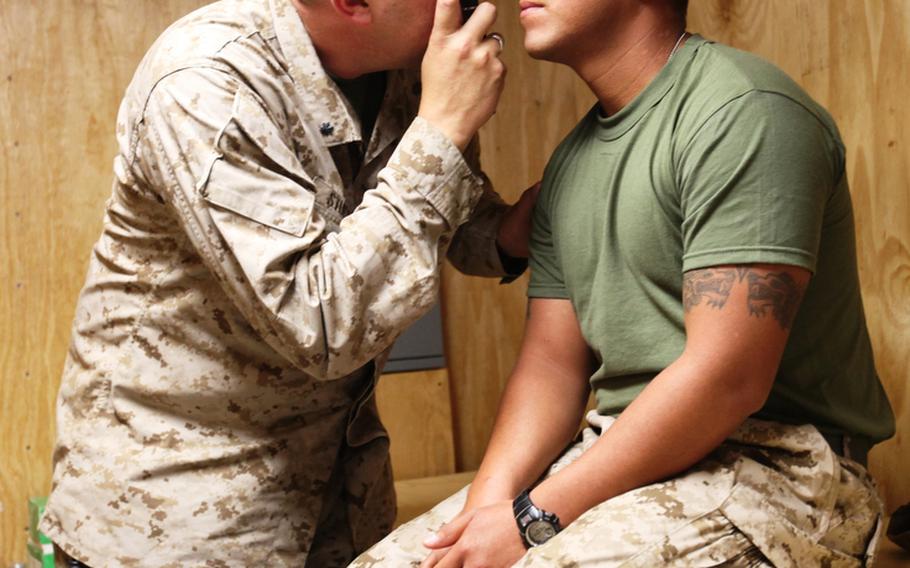 CAMP LEATHERNECK, Afghanistan &mdash; Gunnery Sgt. Williams had done it before, clearing a compound with his company, preparing to build a new patrol base.

It was two weeks ago, in the Musa Qala district of Helmand province. Williams, 36, was climbing down from a roof, a Marine right in front of him. There was an IED on a step. &ldquo;My Marine stepped on it,&rdquo; said Williams, who declined to have his first name published because he considers it bad luck.

The Marine&rsquo;s body absorbed the bomb&rsquo;s fragmentation. He lost both legs below the knee.

Williams was luckier. &ldquo;I was knocked unconscious,&rdquo; he said. He felt nauseous, dizzy and disoriented when he came to, maybe 10 seconds later. &ldquo;I remember trying to talk on the radio, not making any sense. I kept asking my squad leader if we had accountability of the gear,&rdquo; he said.

His company commander said to take a break. &ldquo;I just sat there for about three hours. A corpsman put me on a helicopter.&rdquo;

The blast wave had given Williams a concussion, the most common battle injury suffered by troops in Iraq and Afghanistan. Since 2000, more than 160,000 servicemembers have been diagnosed with concussions. Since the beginning of September, medics at Camp Leatherneck have treated 310 concussed patients, nearly all of them from IEDs.

It was Williams&rsquo; second. In Iraq in 2005, he spent about 10 days in the military hospital in Baghdad for that injury and others, also from an IED.

But this time, his treatment was different. After a few days in the hospital at Camp Bastion, he was sent to Leatherneck&rsquo;s Concussion Restoration Care Center, a unique facility, said its officer in charge, Cmdr. Keith Stuessi, providing concussed troops comprehensive care in a one-stop shop.

There&rsquo;s a class &mdash; Concussion 101 &mdash; about what to expect: sleep problems, dizziness and balance problems, headaches. And there are people to give sleep-enhancing advice, exercises for balance and dizziness problems. Sometimes concussions or the experience that caused it, can trigger depression, anxiety or similar issues, and so a psychiatrist and psychologist are also on staff.

And there&rsquo;s an acupuncturist &mdash; Stuessi himself.

Ever since taking an acupuncture course in 2009, the Navy sports medicine doctor, has been an enthusiast of the ancient Chinese treatment based on tapping into energy pathways with tiny needles, despite a lack of proof of acupuncture&rsquo;s efficacy. "I can&rsquo;t explain why it works," he said. "But I&rsquo;ve found phenomenal, off-the-charts results doing acupuncture for sleep, for dizziness and headaches."

"I was thinking, &lsquo;What is this? Lights, music, needles in my skin &hellip;&rsquo; I thought, &lsquo;This isn&rsquo;t going to work.&rsquo; "

But he&rsquo;d gone days without sleep, even with medication, and he was upset about the gravely injured Marine.

His headache was terrible. And so was his desire to get back out with the other Marines.

"I said, &lsquo;You know, I&rsquo;m willing to give anything a shot to get back.&rsquo; "

So he laid on the acupuncture table. Stuessi placed needles, in the top of Williams&rsquo; head, in an ear, in his feet. He turned out the overhead lights, turned on the little twinkly white lights and new-agey music, and left Williams to relax for 30 minutes.

Williams fell asleep for 30 minutes and awoke feeling drowsy and relaxed. "I ate dinner that night, then I slept for 10 hours," he said. "The headache didn&rsquo;t go away totally, but it was less severe."

Years ago when people got concussions, the medical advice was to keep waking them so they didn&rsquo;t fall into a coma. Other than that, there wasn&rsquo;t much to be done. Concussed football players, for example, usually went back into the game.

That&rsquo;s changed. According to neurologists, concussions occur when a force causes the brain, which resides in protective fluid inside the skull, to keep moving and rotate on the fulcrum of the brain stem. The motion disrupts nerve cells that maintains alertness, followed by chemical reactions which take time to recede before brain function returns to normal.

Sleep and rest are the cure. Rehab on balance and dizziness, which can last two weeks or more, is thought to curtail symptoms sooner.

The acupuncture helps people sleep, which helps everything else, Stuessi theorizes.

"They can better in two to three days instead of seven," he said. "It&rsquo;s all anecdotal," he added, "but when I see it happen 10 to 12 times I have to believe it&rsquo;s real."

Long-term neurological effects, if any, of repeated concussion in troops is unknown, although some football players and boxers have suffered severe problems later.

Marines who have sustained three concussions within 12 months are prohibited from further missions outside the wire, Stuessi said, to prevent a possible fourth.

But the expectation is that most troops with concussion will recover fully, he said.

Williams said he doubted he&rsquo;d turn to acupuncture after his deployment ends.

"I probably won&rsquo;t need it for anything else," he said. "I got a concussion. I was pretty stressed. I don&rsquo;t think anything else in life is going to stress me like what I go through here."