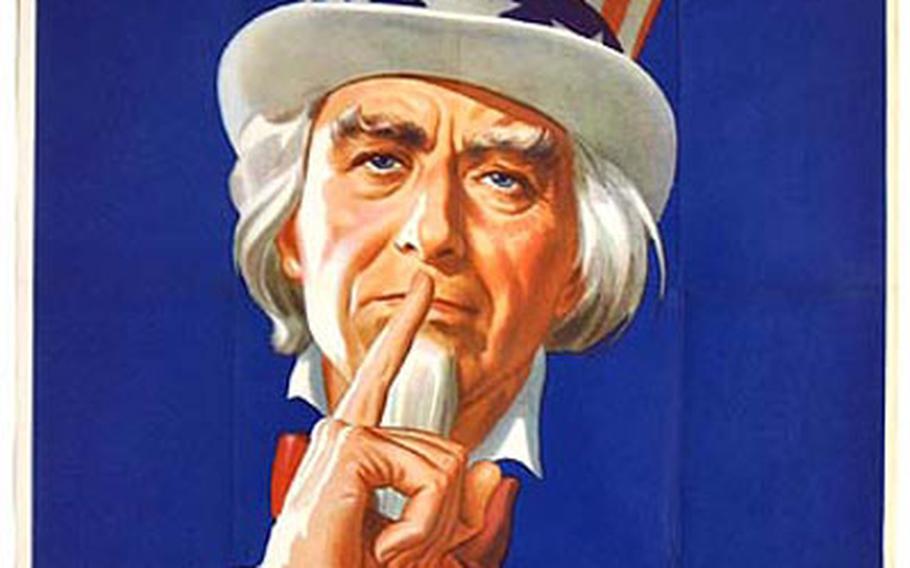 World War II posters such as this one pushed the idea of being ‘tight lipped’ with sensitive military information. Today the same warning applies, but the new outlet for information is the Internet, specifically blogs. (Courtesy to S&S)

WASHINGTON &#8212; Army officials say their latest warning about posting photos isn&#8217;t an attempt to silence military bloggers, but critics worry it could be the first step.

Last month Gen. Peter Schoomaker, Army chief of staff, issued a memo to all senior officers urging them to make sure soldiers aren&#8217;t posting sensitive photographs and anecdotes on the Internet. The message mirrored a February alert on the same topic.

&#8220;Some soldiers continue to post sensitive information to Internet Web sites and blogs: e.g., photos depicting weapon system vulnerabilities and tactics, techniques, and procedures. Such OpSec violations needlessly place lives at risk and degrade the effectiveness of our operations.&#8221;

The alerts said that photos from overseas of things such as damaged equipment and IED attacks could give insurgents tactical information about the effectiveness of explosives and weaknesses in U.S. equipment.

But Paul Rieckhoff, executive director of the anti-administration veterans group Operation Truth, sees the Army&#8217;s new warnings as an attempt to catch up with the technology and censor what soldiers are saying.

Rieckhoff said his group has received numerous complaints from soldiers since the new message was released, including several who have been ordered to stop blogging entirely.

Army officials said decisions on the appropriateness of the material is left to commanding officers.

Spc. Jason Hartley, a New York guardsman, earlier this year was demoted a rank, from sergeant, for activities related to his Web log after his commanding officers questioned his postings. He has used excerpts from that site, www.justanothersoldier.com, as the basis for a book about Iraq, due out in October.

&#8220;I never wanted to put myself or my unit in danger. But a lot of what they complained about really came down to a matter of opinion.&#8221;

Rieckhoff said cracking down on the blogs could adversely affect morale, since many soldiers use the sites to keep in touch with family and friends.

Schoomaker&#8217;s message said a more specific guidance on what can and cannot be posted online will be released later this month. Army officials did not release further details on that document.

Meanwhile, his message was picked up by several news outlets after it was posted online by the Federation of American Scientists, a technology and science advocacy organization.