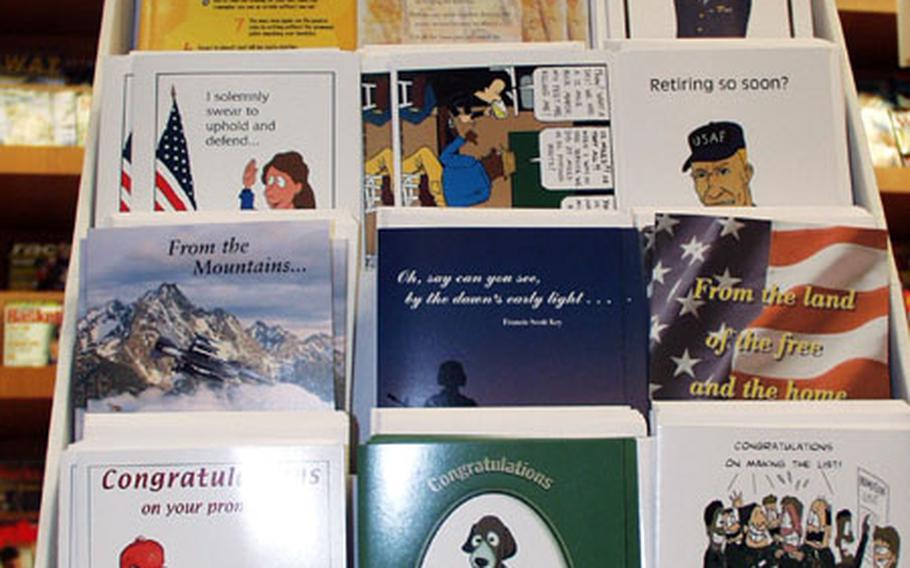 Patriot Greetings is a greeting card company that specializes in military-themed cards. Cards feature scenes drawn by artists with ties to military publications. They carry themes for military-specific events such as promotions, deployments and retirement. (Kent Harris / S&S)

Patriot Greetings is a greeting card company that specializes in military-themed cards. Cards feature scenes drawn by artists with ties to military publications. They carry themes for military-specific events such as promotions, deployments and retirement. (Kent Harris / S&S) 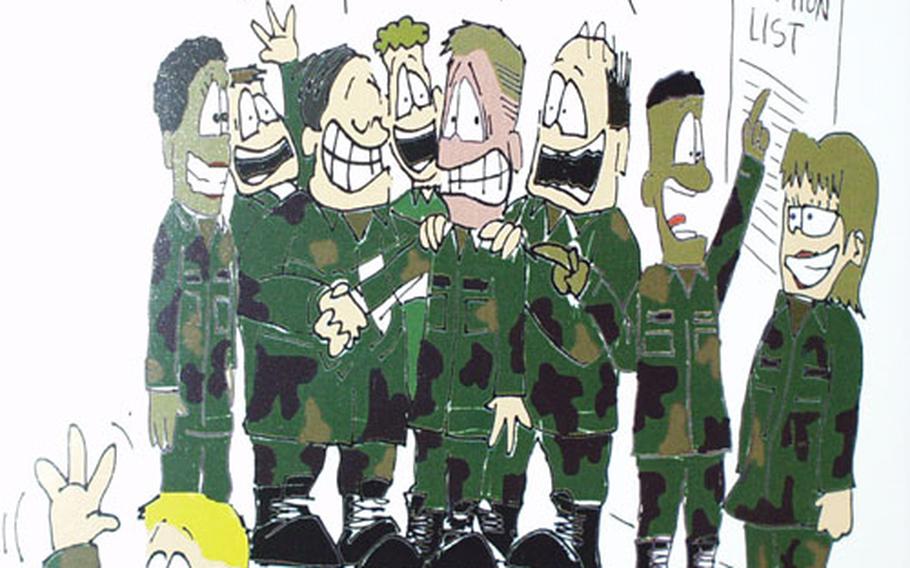 Want to send something to a friend on deployment to cheer them up? Feel the need to recognize your first sergeant on a promotion? Or would Donald Rumsfeld be the perfect one to deliver a birthday greeting?

These options &#8212; and several more &#8212; are now available for Americans stationed in Europe through greeting cards designed specifically for the military audience.

Cards produced by Patriot Greetings, a company formed by four former servicemembers, are currently on sale in many Army and Air Force Exchange Service exchanges or bookstores. More exchanges and Navy Exchange stores will soon follow.

Company Chief Executive Officer Jonathan Hilyard, a 20-year veteran of the Navy and Naval Reserves, said the idea for the cards came up when he left the service several years ago.

&#8220;We have our own clothing, language and events we celebrate,&#8221; he said of the military community.

But there are very few greeting cards directed specifically at a military audience.

So Patriot Greetings was formed. Two other officers in the company &#8212; Thomas Myerchin and Bob Cohen &#8212; also served in the Navy.

Hilyard said the company&#8217;s knowledge of the military &#8212; he was based in Europe for five years during his active-duty stint &#8212; is displayed in the cards themselves. The cards feature work by artists who either worked or are still working for military publications.

They carry &#8220;words and images that are really going to make [recipients] feel special, important and recognized.&#8221;

He said the cards contain &#8220;authentic&#8221; scenes from ordinary military life, with a few liberties taken. One of those features a caricature of Rumsfeld, the secretary of defense, ordering the recipient to have a happy birthday.

Mike Gerth, a senior retail program specialist for AAFES-Europe, said the cards were first introduced at outposts manned by personnel taking part in Operation Enduring Freedom. He said AAFES expects the cards &#8220;to really do well. We&#8217;re really excited about it.&#8221;

Patriot Greeting cards have been on sale in smaller retail stores in the greater Washington, D.C., area for about a year. The firm produces them from a factory in Northern Virginia. Hilyard said more than 80 different designs have been generated.

He said the company is negotiating with larger retail chains that might eventually allow the cards to be sold throughout the United States. But getting the cards available to the military audience was a top priority.

To support that, the company will give an annual &#8212; still to be determined &#8212; portion of its proceeds to the Next Generation of Heroes Foundation, a college scholarship fund for the sons and daughters of military personnel who have died or been seriously injured in the line of duty.

It has also donated thousands of cards to organizations supporting American troops.