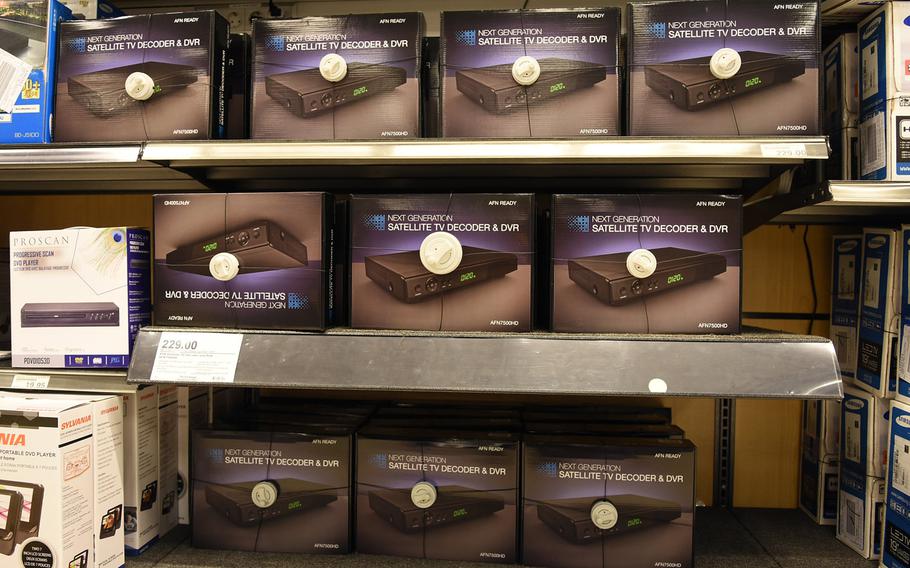 RAMSTEIN AIR BASE, Germany — American Forces Network made the switch to high-definition TV overnight Monday in Europe, the Americas, Southwest Asia and Africa, completing the last phase of the agency’s worldwide conversion to HD programming.

AFN officials said off-base subscribers should still be able to view AFN channels with either the Cisco 9865 decoder - which has been around since about 2010 - or the brand-new AFN7500 decoder, both of which are compatible with the new digital signal after minor setting changes.

About 20,000 of the 70,000 decoder boxes worldwide cannot receive the new digital signal and will have to be replaced, AFN officials have said.

Satellite dishes do not have to be adjusted.

Customers having problems getting a signal should contact the AFN help desk at myafn.net/afnhd, the AFN spokesman said.

Off-base residents needing the new AFN7500 decoder should be able to find one in most Europe base exchanges, where the devices began arriving about a week ago, AAFES officials said.

“We have plenty of decoders in the stores, with additional inventory in our warehouses to ensure we have enough decoders for our customers,” said Jason Moore, chief of telecommunications outside the continental United States for AAFES.

Some customers were snapping up decoders at the Ramstein base Exchange Tuesday morning, undeterred by the $229 price tag so close to the holidays.

Dave Ritter, an Army retiree, stopped by after waking up Tuesday morning to find a blue screen on his television with no AFN signal.

Todd Jackson, an Air Force retiree, said he set up his new decoder Monday night in about 15 minutes by following directions online. “Compared to the old one, it was a cake walk,” he said of the process. Jackson was waiting for AFN to authorize his decoder number to receive a signal and see crisper, HD images on his television set.

Whether the process is as seamless for on-base residents across Europe remains to be seen.

At some bases in the Pacific, residents had to purchase or rent a new set-top box to get the service, which is provided free to the military if they have a television set incompatible with AFN’s upgraded MPEG-4 signal.