Michael Sullivan, director of acquisition and sourcing management issues for the Governmental Accountability Office answers questions on Wednesday, March 23, 2016, during a House Committee on Armed Services hearing on Capitol Hill in Washington, D.C., where discussions were held on the future of the F-35 Joint Strike Fighter program. (Carlos Bongioanni/Stars and Stripes)

Michael Sullivan, director of acquisition and sourcing management issues for the Governmental Accountability Office answers questions on Wednesday, March 23, 2016, during a House Committee on Armed Services hearing on Capitol Hill in Washington, D.C., where discussions were held on the future of the F-35 Joint Strike Fighter program. (Carlos Bongioanni/Stars and Stripes) 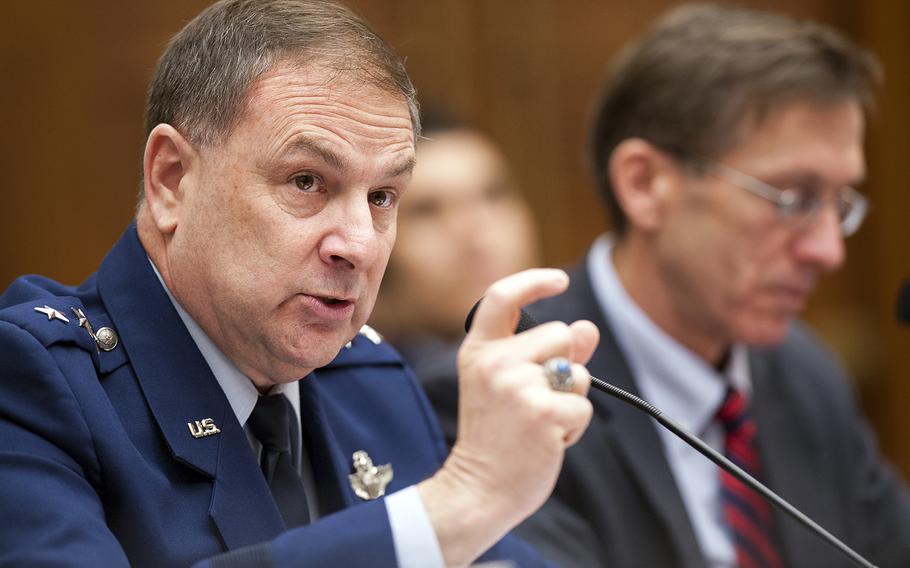 Air Force Lt. Gen. Christopher Bogdan, executive officer for the F-35 Lightening II Joint Program Office, answers questions on Wednesday, March 23, 2016, during a House Committee on Armed Services hearing on Capitol Hill in Washington, D.C., where discussions were held on the future of the F-35. (Carlos Bongioanni/Stars and Stripes) 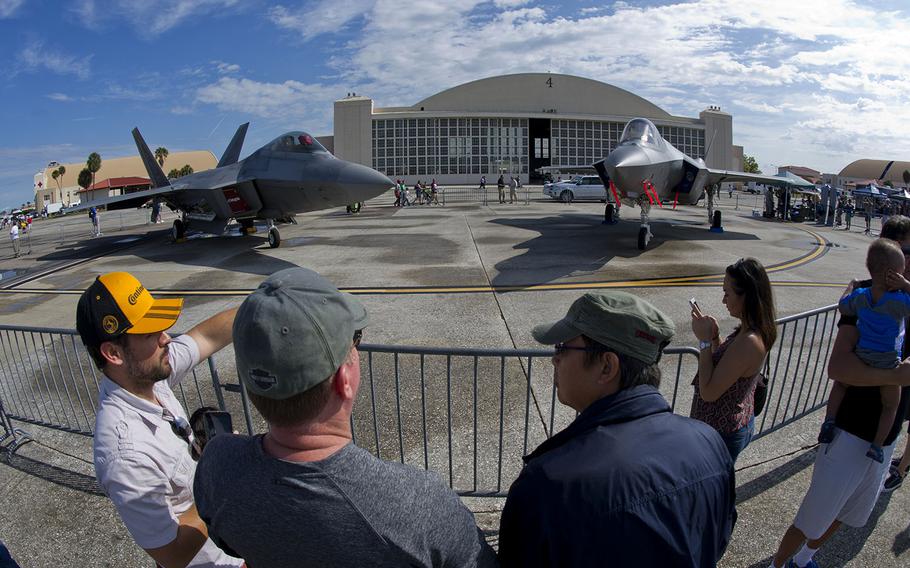 WASHINGTON — To say the military’s futuristic F-35 Joint Strike Fighter has a marketing problem is an understatement.

Just this week, an Australian think tank called it a “jackass of all trades” and compared the Lockheed Martin 5th-generation fighter to a Ponzi scheme, according to a newspaper in that country.

There is also plenty of bad press in the United States. The Daily Beast website published a story last week calling the F-35 a “billion-dollar war toy” and described the dire state of the aircraft’s development with an expletive.

The Pentagon’s most expensive acquisition program is also its most lambasted.

“I have never been associated with a program in my 25-plus years of acquisition where the public perception and the reality are so different,” Lt. Gen. Christopher Bogdan, the program executive officer at the F-35 Lightning II Joint Program Office, said Wednesday. “Part of that is our problem for not telling the story.”

The military now hopes to finally change years of negative impressions by bringing the aircraft – 15 years in development – face to face with the public in 2016, Bogdan said.

Airshow crowds in New York City, Las Vegas, Chicago and Fort Lauderdale, Fla., will finally get a close look at the F-35. The Air Force Heritage Flight Foundation, a nonprofit group that performs demonstrations and supports the service, has been authorized to show off the fighter throughout the year. Its next scheduled demo is at Luke Air Force Base in Arizona in April.

The service will also team up with the Marine Corps to bring a handful of the fighters to an airshow in England in July, Bogdan said.

Meanwhile, the Marines and the Navy will be bringing news reporters on sea trials this year to talk about the aircraft. The Marine variant of the F-35 was declared combat-ready in July.

“For our warfighters, there is clearly a role for them to play in advocating for this airplane and in the past we haven’t done a great job of that simply because the airplane was immature,” Bogdan said. “We were only operating out of a number of locations.”

The F-35 faces some high hurdles as far as public perceptions – and its actual shortcomings.

The program ballooned by billions of dollars earlier in the development, which Bogdan said the public has never forgot. Costs have stabilized and come down slightly. The Defense Department now estimates the total acquisition to be $379 billion with a lifetime price tag of $1 trillion during the next four decades.

The evolving aircraft design also has been plagued by technical problems, including high-tech but heavy helmets that could snap the necks of smaller pilots, buggy systems software and wing cracking.

On Tuesday, the Joint Program Office told House lawmakers that an ongoing electronics glitch is causing the F-35 radar system to blink out regularly during flight.

The system unexpectedly shuts off and requires a few minutes to reset on average once every four flight hours, versus every 30 hours with earlier versions of software. Lockheed Martin has a proposed fix that will be tested out in the coming weeks, the office said.

“It’s certainly a critical thing. I don’t know if I’d want to be a pilot and watch the screen go blank,” Michael Sullivan, director of acquisition and sourcing management issues at the Governmental Accountability Office, told House lawmakers.

The saga of the F-35 also could be a tough sell to servicemembers, said Rep. Tim Walz, D-Minn.

Walz said they might have bad perceptions from seeing the lavish spending on the aircraft and its checkered development record amid the Defense Department’s effort to trim back benefit programs for troops.

“I’ve been to no less than 14 hearings dealing with changes to [military] retirement plans, taking away of the housing allowance, transferability of the GI Bill benefit, commissary changes and Tricare [reform],” Walz said. “The perception out is when the Pentagon needs to save money they go to those programs.”

Meanwhile, F-35 problems persist and Australia is now reconsidering its purchase of the aircraft, citing seven years of future fixes needed for bugs in the aircraft’s software, he said.

“I go back home and I talk to soldiers who say, ‘I just lost a GI Bill benefit and now this,’” Walz said. “How do I talk to them about it?”