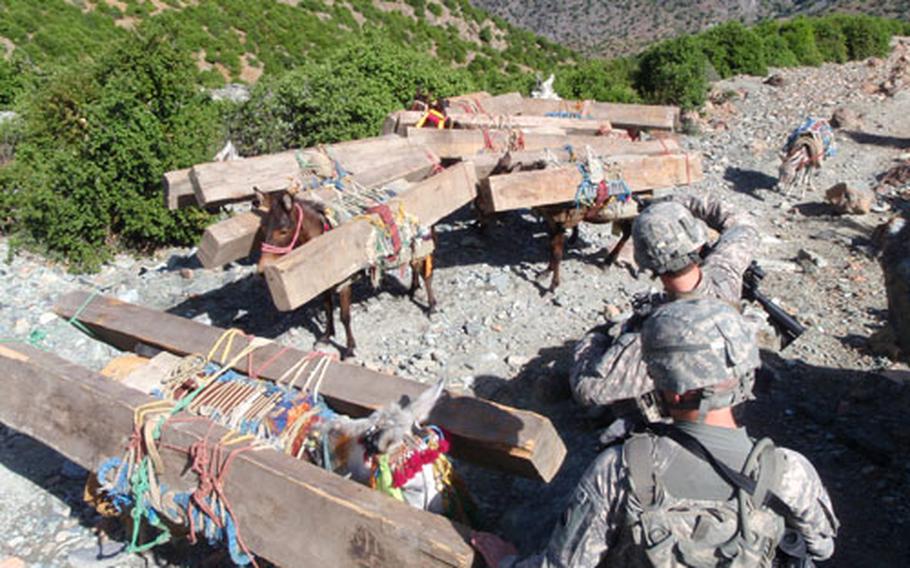 American soldiers with the 1st Battalion, 32nd Infantry Regiment, intercept illegal timber as it is smuggled through the Narang Valley in Konar province, Afghanistan. Military officials say timber smuggling is an even more lucrative way for militant groups in the area to raise funds than the gem or drug trades. (Courtesy of U.S. Army)

American military units in Afghanistan&#8217;s Kunar province are targeting what officials say is one of the most lucrative methods of funding insurgent groups: smuggling timber.

It&#8217;s been going on for years. But American military officials say the smuggling networks have been "practically untouched" because of a familiar problem &#8212; a lack of troops.

"Mostly, the units before us did not have the troop strength that we have to combat the problem," said Lt. Col. Mark O&#8217;Donnell, commander of the 1st Battalion, 32nd Infantry Regiment, also known as Task Force Chosin.

"Until Afghan officials can get a hold on how to fix this, we&#8217;ll fix it the best we know how," O&#8217;Donnell said in an Army press release. "And that&#8217;s with strategic operations. In the future, hopefully, things will be different, but for now we will handle the problem as it is."

While the military did not provide specific financial figures, officials said the illegal timber trade is even more lucrative than gem and drug smuggling.

In areas like the Swat Valley, Pakistani Taliban members have raised funds through the illegal timber trade, kidnappings for ransom, smuggling drugs and even robbing banks.

The Pakistani military has been fighting in Swat, where a deal had been struck between the government and militants to allow the groups to impose strict Islamic law in exchange for halting attacks.

That deal, widely criticized by the U.S. and other nations, collapsed in April, leading to the Pakistani military operations.

Another militant group in eastern Afghanistan, the Haqqani network, also allegedly uses the illegal timber trade to fund its fighters and operations.

The Haqqani network, which is independent of, but allied with, the Afghan Taliban, is considered one of the more sophisticated militant groups in Afghanistan and is alleged to have conducted, among others, the Serena Hotel attacks in January 2008 and the Indian Embassy bombing in Kabul last July.

During the Afghan-Soviet war, the network received funding and training from both Pakistani and American intelligence services. But in more recent years, officials have alleged, the Haqqani network has turned to timber smuggling and works closely with foreign militant groups, including al-Qaida.

In Kunar province, American officials said, most of the illegal timber comes from the Korengal Valley and is moved down the Kunar River. The timber is loaded onto the backs of donkeys and transported across the border. In Pakistan, it is used to make expensive furniture.

According to military officials, the timber trade in Kunar has been documented by cameras on American unmanned aerial vehicles, or UAVs.

&#8220;What we&#8217;ve observed is a well-oiled process. These guys have been doing this for awhile and have their routine down to a science. Although the procedure may seem primitive, it works, and more lumber than we can imagine has been smuggled over the border in this way.&#8221;

&#8220;We are also experiencing more focused attacks on our strategic outposts,&#8221; he said. &#8220;The enemy is mad that we are putting a stop to this and are illustrating that through more vicious attacks.&#8221;