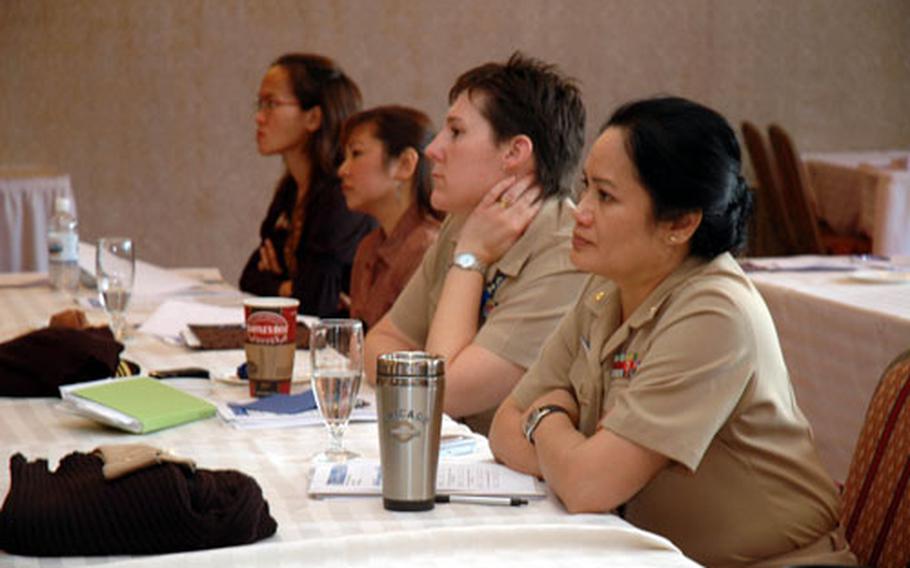 Medical staff from Air Force and Navy bases throughout Japan met Thursday and Friday at Yokosuka Naval Base this week to talk about patient safety. In the past few years, the Pentagon has been refocusing its efforts on patient safety, from standardizing patient care procedures to encouraging discussion about incidents. (Teri Weaver / S&S)

YOKOSUKA NAVAL BASE, Japan &#8212; Six years ago, the Pentagon&#8217;s budget called for a new office within the military dedicated to tracking, correcting and preventing medical errors that jeopardize patient safety.

The timing in creating the Patient Safety Program was no accident, according to military health officials.

In the previous year, nationwide surveys showed that 70 percent of patients didn&#8217;t trust their health care providers, according to the Pentagon&#8217;s Center for Education and Research in Patient Safety.

Another study estimated at least 46,000 people died each year from medical errors, according to Howard S. Steed, deputy director of the center. &#8220;That&#8217;s every year,&#8221; he stressed Thursday during a break at a patient safety conference at the Officers Club on Yokosuka Naval Base.

Yokosuka hospital&#8217;s risk manager, Cmdr. Sherri Santos, said pending legal matters prevented her from releasing any statistics on medical errors at the on-base hospital. But she did say that reporting of errors, and of &#8220;near misses,&#8221; was up in recent years because of the push to admit to and learn from mistakes.

In a hospital setting, a nurse or aide questioning a doctor can prove challenging. In the military, rank is added to that imbalance, center staff said. One of the major goals in reporting and preventing medical mistakes is encouraging lower-ranking servicemembers to question their superiors when a patient&#8217;s well-being is at stake.

While military hospitals and clinics represent a small portion of the nationwide studies, the findings have prompted a closer look at how the military reports and learns from its mistakes, Steed said.

With that in mind, Steed and other center staff now travel the globe, providing seminars that encourage military health workers to talk about medical mistakes and share ideas for how to prevent future ones. On Thursday, airmen and sailors from throughout Japan gathered at Yokosuka to talk about their attempts to curb medical errors.

Steed said another key to preventing medical errors involves the patients themselves. Steed recommended that each patient should have a family member or close friend as an advocate during a medical procedure or hospital stay. He also reminded patients to have a complete list of current medications, including over-the-counter drugs and vitamin supplements.