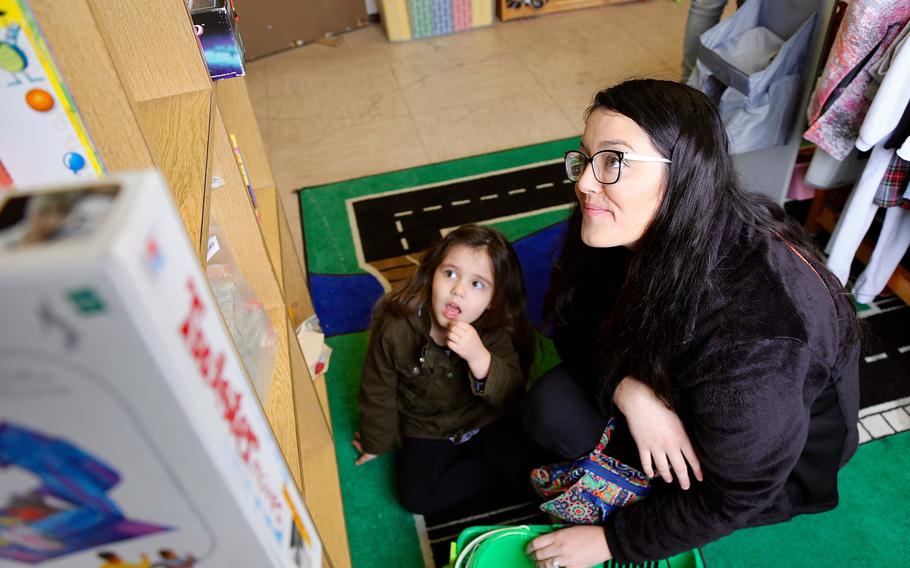 Jaimie Boyd, 26, and her daughter Aubree shop for toys during their weekly visit to the Pulaski Barracks thrift shop on Wednesday, Sept. 20, 2017. Army officials have told members of the thrift store organization they must close because the base is being returned to Germany. (Will Morris/Stars and Stripes)

KAISERSLAUTERN, Germany — An order to close a thrift shop located on Pulaski Barracks will strip thousands of dollars from local charities and end a 54-year-old community institution, the volunteer group running the shop said.

Last week, garrison officials told members of the Kaiserslautern and Pulaski Thrift Shop, which opened in 1963, that they must vacate their building by the end of the year. Though they knew the move was coming, notice of the final decision came as a shock, members said. Now the group will now be left with one store, located in Landstuhl.

“Once Pulaski closes, our fear is we know right off the bat we are going to lose 50 percent of our profits that go back into the community,” said Angie Shinkle, the group’s first vice president. “Landstuhl doesn’t get nearly the traffic that Pulaski gets.”

Some customers said they would throw out or recycle their clothing and household donations rather than travel to Landstuhl, Shinkle said. She is concerned that annual income in the coming years will be less than half of the $68,000 the group raised last year for charitable giving.

From June 2016 until last June, the group donated $46,000 to pay for scholarships and school expenses for children from military families.

A $8,000 more went to help fund the chaplain’s programs for the holidays to help needy military families. Of special interest to many who volunteer at the shop is the Bright Eyes program, through which the group donated about $3,000 to buy eyeglasses for children. Scouting programs, youth sports and local firefighters are among groups that also received thrift shop funding.

“Included in these directives is direction to close and return major portions of Pulaski Barracks to the host nation,” Alford said. “The U.S. Army is executing these plans and taking necessary steps to close all affected areas and buildings on Pulaski Barracks.”

The thrift store is now trying to shed inventory with a 50 percent-off sale. The sale lasts until everything is gone, or until Oct. 26, when the store will close to the public.

Pulaski Barracks, now part of the larger Vogelweh Air Base, is slated to be returned to the German government by December 2018, according to information given to the thrift store by the Army. Germany’s federal property agency has not yet been notified by the Army of a timeline for the move, an agency spokesman told Stars and Stripes on Monday.

Members hoped another building would be made available to them, preferably at Rhine Ordnance Barracks, but local Army officials turned them down, Shinkle said.

“The garrison has two other thrift shops within our footprint. These are located at Landstuhl and Baumholder,” he said. “The U.S. Army has no other available facility space to house thrift shop operations near Pulaski Barracks.”

Not all of Pulaski will be returned to the German government, Alford said. The Army will retain the park, access point, auto shop, car wash and gas station. This closure does not affect current Air Force property or operations on Vogelweh and Kapaun.

As much as the loss of funds worries her, Shinkle said a vital social network for deployed military members and their family members, another critical aspect of the shop, is about to be lost.

Traudel Gebhardt-Grube, a longtime store volunteer, said the store has become a welcoming place for families on their first deployment.

“They meet here, they make friends,” she said. “We have people who come here every day. We have people that when they return to the States, they cry.”

One customer, Jaimie Boyd, 26, of Cabot, Ark., said on Wednesday she comes with her daughter at least once a week to socialize, find toys for her daughter and shop for knick-knacks.

“We come to the store to break up the routine,” she said. “It gives us something to do. My daughter loves it here. I don’t want it to close.”