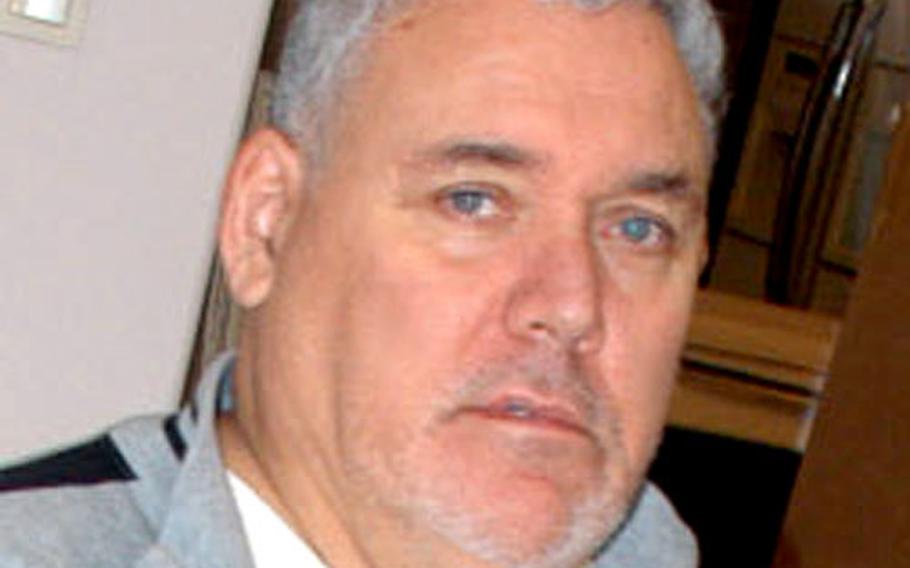 Ben Keller, a U.S. government worker, was stopped in Itaewon on a November night by military police. He admits he broke curfew but believes the policy goes too far. (Teri Weaver / S&S)

SEOUL &#8212; U.S. Forces Korea officials say they understand the complaints about the current curfew policy and its constraints on life after the workday is done.

They also say both servicemembers and civilians volunteered to be a part of the military. That offer of service and work involves restrictions, including the daily requirement that all servicemembers, workers and contractors associated with USFK comply with a midnight-to-5 a.m. curfew.

Yet enforcement of that requirement is not so clear-cut because U.S. military personnel cannot directly enforce the curfew off-base, U.S. military officials have said.

Here&#8217;s how the process works, according to USFK:

Military police make off-base rounds at night with a Korean police officer, an official who legally can stop, question and ask for identification from an American civilian. If the civilian refuses to show his or her ID to the Korean police, charges for noncompliance from the Korean official are possible, McRee said.

Sometimes during the patrols, an MP will opt to ask a Defense Department worker or contractor to head home rather than file formal paperwork, information that is routed to the person&#8217;s boss, McRee said.

Keller, a civilian project manager with the 41st Signal Battalion, had been in Korea since 2000. In December, he moved back to New Jersey to accept a promotion. In an interview in his Itaewon apartment before he left Seoul, Keller, 55, recounted how he ran afoul of the curfew patrol.

USFK officials declined to comment on specifics about Keller&#8217;s case, but an MP report Keller provided Stripes says he was drunk and disorderly and at an off-limits bar after midnight. The two-page report is unclear about what charges he faces from that incident but does state he was given written notice for breaking curfew.

While McRee did not answer questions about Keller&#8217;s case, he did discuss general enforcement of the curfew, which largely depends on civilians&#8217; supervisors.

Others interviewed by Stripes indicate USFK&#8217;s enforcement of the curfew among civilian and contract workers has varied in the past three months. In December, McRee said his MPs were issuing show-cause letters to the people who broke curfew. That same month, his office told Stripes that 26 show-cause letters had been issued to civilians during the last seven days in September.

Regardless, notice of the curfew violation goes to the person&#8217;s boss, McCallum said Friday. It&#8217;s up to the employer to decide whether there&#8217;s punishment, he said.

Col. John Arrigo, a deputy judge advocate for the military in South Korea, stated in a written response to Stripes&#8217; queries in December, &#8220;In an individual case, a supervisor might take no action, counsel an offender or recommend a loss of privileges. Serious misconduct might justify a loss of position and removal from the Republic of Korea.&#8221; Family members of civilians and contractors also could be returned to the States as a punishment, Arrigo stated.

McCallum said Friday that to his knowledge, no one has been fired or removed from South Korea because of the curfew. Still, for some, the policy has caused significant tensions at work.

In November, information about James Johnson&#8217;s late night out found its way back to his boss. Johnson, a contractor at Osan who is retired from the Air Force, was drinking after hours in Songtan just before Thanksgiving. Military and Korean police approached him, but he tried simply to ignore their questions, he said.

USFK officials repeatedly have said they have the authority to enforce the curfew. They cite Department of Defense directives from 1996 and 2000 that state a commander can set policy based on protecting civilian and contracted workers.

The joint patrols with U.S. MPs and South Korean police occur near Osan Air Base and in Itaewon, the foreigner-friendly neighborhood just outside Yongsan Garrison in Seoul. But officials in other parts of Seoul &#8212; a city of more than 10 million people -&#8212; don&#39;t allow the patrols, according to Col. Timothy McNulty, the Area II commander who oversees installations in the Seoul area.

The disparity means more and more soldiers and civilians are heading for different areas of Seoul, such as the Hong-ik University area, McNulty and others say. McNulty said last month he was working with South Korean police to add patrols to other Seoul neighborhoods.